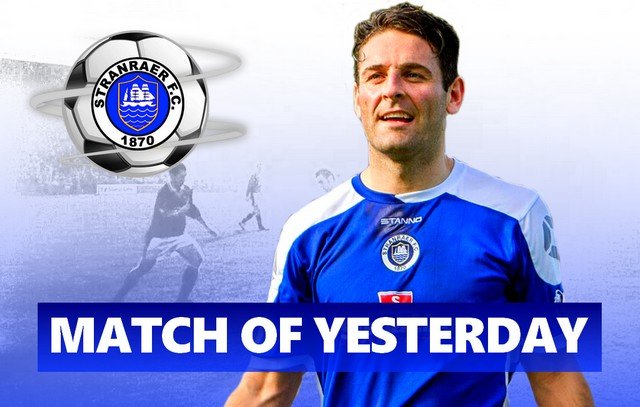 In the fourth of our new series – Match of Yesterday – we ask Frank McKeown for his favourite game during his time with the Blues. The former club captain made 192 appearances and scored 18 goals during his two spells at Stair Park.

Frank: There are obviously a few and I was trying to think of what game to choose.

If you have spoken to Jamie Longworth, he is going to say the game at Ibrox (a 1-1 draw with Rangers on Boxing Day). That does stand out, obviously, that does stand out because I am a Rangers fan. They were going for a record number of wins in a row and that certainly stands out. I remember before that game feeling nervous and getting a draw was incredible.

I will pick another game where we won and will go for when we beat Ayr 6-3.

Frank: The Rangers game, I was the captain and came out with Chris Aitken’s daughter, Lucy.

That day was a special day and I am very close with Chris. He is a good friend of mine and he got injured against Brechin earlier in the season. It would have been his dream for him to play that day and his wee girl to be there. I know Lucy well, I know the family and I am friends with Stevie Aitken as well.

It was special to walk out, it was my dream to walk out at Ibrox, particularly as captain that day. For Stranraer to score in the last minute was just amazing.

In terms of other games, it was quite nice looking back at some games and scrolling through some of the old fixtures. Games bring back a lot of good memories.

I thought about the game at Easter Road where we lost 5-3 to Hibs and probably the best individual performance from Chris Aitken. He was just unbelievable that night (Liam Craig scored a hat-trick for Hibs with Abdellah Zoubir also finding the net while Scott Rumsby scored an own goal; for Stranraer, Jamie Longworth and Chris Aitken scored while Michael Nelson scored an own goal).

The other one was 5-1 at home against Dunfermline. Gregor Buchanan was sent off for them but we were so far ahead of them that day (Grant Gallagher, Chris Aitken, Willie Gibson, Jamie Longworth and Jon McShane scored, with Andy Geggan finding the net for Dunfermline).

We also beat Dunfermline 1-0 at East End Park. I was lucky that game because I had a poor first half. At half time, I remember Stevie Aitken going mental. They had hit the bar and the post and Stevie Aitken and Stevie Farrell were going nuts. I was having a really poor game and we knew we had not played really well.

I scored in the second half and went from having a really poor game to scoring the winner. There is a cracking picture of me running away celebrating and Sean Winter chasing after me.

Q: Take me through the game?

Frank: I think I remember that game I did not score but I just remember it being one you were playing in against your biggest rivals. It was November and it was a Tuesday night.

Although they scored three goals, we were just excellent and on top so much. It was one of those games where I thought we just completely dominated it.

I remember feeling really good and seem to remember Chris Aitken scoring two penalties. Jamie Longworth got a hat-trick that night and it was one of those games where the crowd were right behind you. I remember Jamie scoring and the Stranraer fans were all piling on top.

I think we beat Ayr 4-0 that season (Sean Winter and Andrew Stirling scored with Martin Grehan scoring twice) as well. Then, at Somerset Park, I got sent off for and they beat us 5-0.

In terms of the game, it was probably the 90 minutes rather than the build up. I think Jamie scored early on. I don’t know if they were shocked or surprised. I think we drew early in the season (1-1 at Stair Park with Longworth and Michael McGowan scoring).

After that game, the bragging rights last a good period of time. I think we beat them in November and January. We beat them 4-0 down at Stair Park, so we beat them home and away and to score ten goals against your biggest rivals is great.

Q: It must be one of the few games where the opposition has scored a hat-trick but come out on the losing side?

Frank: Michael Moffat was and still is a really good player. He is one of those who just pops up and scores. He scored a hat-trick and you would probably be putting a lot of money on him being on the winning team.

You are on the pitch thinking ‘what is the score?’. I cannot remember the order of the goals but I just always felt no matter how many they scored, we would score more. We could beat anybody that night. You were coming off the pitch thinking you did not care who you were playing, you would have won.

I think that result really set us on a good run. Looking back, I think we must have been something like 10 or 12 games unbeaten. I think that was the year we finished third.

We were really, really good that year. It was probably the year we arrived as a team. Stevie Aitken had added people to the club and squad and we just improved and improved. The following year we finished second and it was just that kind of momentum that we had.

Frank: It was pure adrenaline.

Everybody was happy – unfortunately that was the sort of game where you were wanting a team night out but it was a Tuesday night and we all had work in the morning!

I remember the dressing room was just buzzing, absolutely buzzing. The management team were delighted and everybody was just together.

As I say, we went on quite a run. At that point, it was November and obviously the Rangers game was on Boxing Day. The Ayr game was a few games before that.

Frank: The momentum meant we felt unstoppable at that point and it did not matter who we played. We would go and beat anybody.

That night at Ayr was buzzing and there was a real togetherness. It sticks in my head and nothing can beat that. That is probably the feeling I miss on a Saturday now.

Every shot we had was going in, every pass you made was good. If they scored five, we would have scored ten.

Not used: Baxter and Fahey.