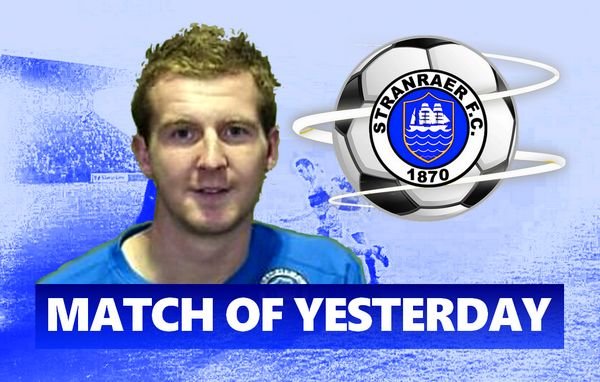 In the seventh of our new series – Match of Yesterday – we ask Murray Henderson for his favourite game during his time with the Blues. The defender enjoyed two spells with the Blues between 2003 and 2010 and scored 13 goals along the way.

Murray: I have followed the Match of Yesterday series a little bit on the website. I have to say, initially, the first game that comes to mind is Stranraer v Greenock Morton in the penultimate game of the season. I’ve seen a couple of folk have mentioned that already. At first, I thought I would say my first game but I cannot remember who it was against!

But, in reality, I think the game with Greenock Morton typified everything that Neil Watt and Stuart Millar’s team was about over those seasons. The competitiveness, the absolute determination not to get beat and always punching above our weight. Things like that sum up the time at Stranraer.

Q: What other matches did you consider?

Murray: There have been a number of games that have stood out. The game prior to winning the league (in 2004) at Albion Rovers. It was Stranraer at Stirling Albion and we ended up drawing there after leading. Drawing meant that if we won on the last day we were champions and we won 4-0. There were balloons and beachwear in the crowd. A season earlier, I had been playing amateur football and then winning a title – it was the stuff of dreams.

There would also be the first away game in the old First Division, now the Championship, against St Mirren. I remember walking off after a 0-0 draw and hearing Kirk Broadfoot saying to his team mates why had they just drawn with such opposition? It was a sign of what we had about ourselves, even though we had a significant change in the squad going into that season.

I looked at the last game of that season at Firhill – hugely with regret. It was my last game in my first stint at the club and we let ourselves down in the midweek game. We were tired; it had been a long season. We got to the game at the weekend and we had chances to bury them. Away from home, we missed what we would class as clear cut chances. That was stinking!

To be honest, scoring at Tannadice in the CIS League Cup in 2004/05 season. That was, personally, a great moment given the stature of the club – even though we lost 3-1 in the end. Ian McCall lost his job at Dundee United not long after that. It was a game, he said, he started to keep an eye on me for signing for Queen of the South. But, I think, it has to be the Greenock Morton game for a number of different reasons. Being honest with you, the pressure of the game was clear.

Q: What are your memories of the game itself?

Murray: We had a resilient backline with myself, Fraser Wright and Kevin Gaughan, with Stephen Swift and Lee Sharp sitting as wingbacks. We did not have the outlet of David Graham in the second half of the season and the ball was coming back on us. It did very much feel like the Alamo. The kick-off got delayed because so many Morton fans made the trip down. They thought they would go and beat us. It was full time v part time and we had just come up. Brechin were running away with the league and were outright leaders. Morton’s fans and players thought they were coming down to turn us over and that added a bit of pressure. They were a team of full time players and had Peter Weatherson and Chris Templeman up front.

Fraser, Kevin and myself looked across with eyes of determination and said ‘they are not going to score’. They scored first and I think if they had got a second we would have crumbled. But, Allan Jenkins scored not long after that and it just cemented in our mind that they were not going to score again. The boys would do whatever to avoid getting beat and we had the confidence of Michael McGovern behind us as a steady pair of hands.

Murray: It’s cliched but that stage of the season is known as the business end of the season. The game on Saturday the week before finished (0-0 at Ayr) and you started thinking about the next Saturday. You know there is something to be played for and you finish one and start thinking about the next one. Neil and Stuart were very good at managing that balance of expectations. Expectations of ourselves and what we were capable or not. That week we did not train. Guys were in seeing the physio, relaxing and trying to keep us as chilled out as possible. Players were playing with knocks and it was about mentally trying to feel as comfortable as possible and then there was Thursday and Friday and you do what you do every week but something was telling you the magnitude of the game.

Honestly, I was born a competitor and part of that sees you through and goes out to win. We arrived on Saturday morning and I was playing against a centre back at Greenock Morton, who was a school friend. Stewart Greacen had been a player at Rangers as a young lad and left the under-10s where we were to go to Rangers. Then, all of a sudden, we are playing against each other and one of us had to lose. That added a little bit to it. Travelling down there were texts from friends and they were all thinking full-time team beats part time team – it’s inevitable. That added a little bit of spice and one of the first people I talked to after the game was Stewart.

Q: Were you able to savour it as time ticked on?

Murray: I think it depends on the intensity of the passage of play. In certain games because we had lost some of the dynamic up front with David Graham not being there we were struggling to score goals. In the first of the season compared to the second half of the season there was probably a stark difference. We knew there would be long periods of keeping teams at bay, particularly playing teams like Greenock Morton. I don’t recall having much of a breather in that game. It would not matter if Allan Jenkins scored, we felt no matter how long the game went on we would still be standing tall. That is not to say we were not getting extremely tired but we switched into a gear where you would say they are not getting through. When the whistle goes that creates that level of emotion. It is just tiredness and that kind of resistance you have been building switches off and it comes out.

Q: What about in the dressing room?

Murray: I don’t think you can think much more than the game. Simply, we needed a result. We got that and you got back in the dressing room. It was not until the next day and you think you are going to be playing in the second tier of Scottish football. From my perspective, it was big. For guys who had been in senior football all their career, then, there was me, I had been playing amateur with my mates. You are thinking of contracts. Most part time players are on year to year contracts and you start thinking about the following season. At the time of the game, it is just absolute joy at getting the result and knowing we have got promotion. I don’t think I understood what it meant until days afterwards and you think what is ahead of you. Those three years were not just the best three in football but arguably the best of my life – subject to marrying my wife and having my son. The quality of the dressing room we had in that period, every Saturday felt like promotion Saturday. We had such a good camaraderie.

Q: Did you go out the next day and get as many newspapers as you could?

Murray: I think when I first started playing with Stranraer I was not used to being written about. I almost got too close to looking at newspapers and I remember a conservation with Neil Watt in my first season. He said it only mattered if you were playing well and getting picked every week. Everybody has different views on the game and after the game I did not need to read about it. I told myself I did not need to read if I got a five, six or a seven in the ratings. I didn’t need to read if it was described as a shock. It was not a shock to us. We knew we were capable of it.