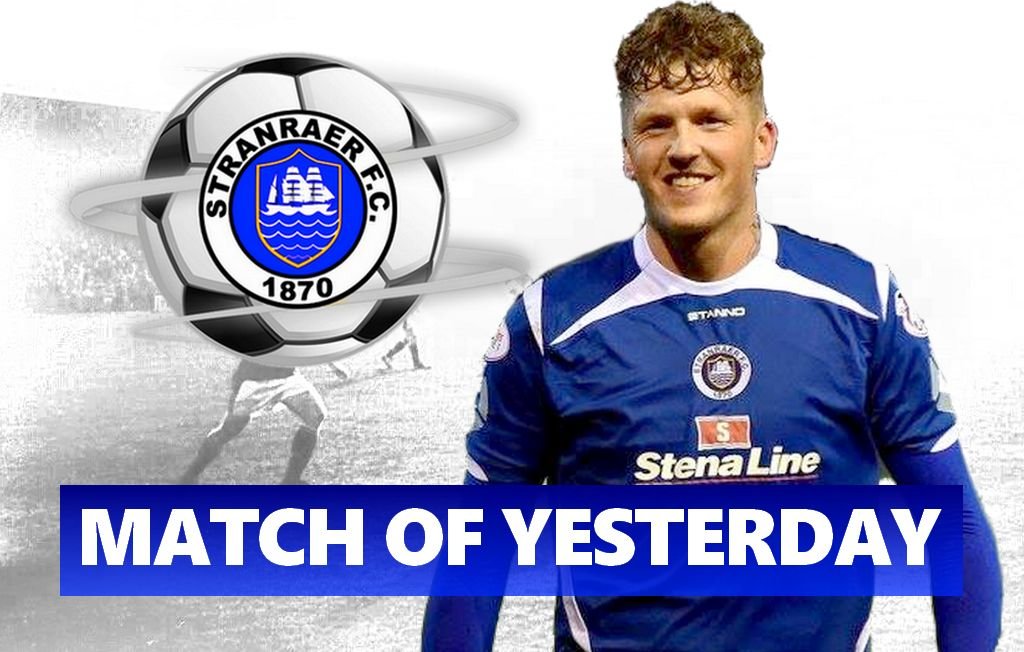 Whether it is a last-minute goal, derby day delight, giant-killing or something much more personal, there are games which fans can recall every detail from, even years down the line.

In the ninth edition of our Match of Yesterday series, we ask Willie Gibson for his favourite game during his two spells with the Blues.

The midfielder made a total of 98 appearances – with just three from the bench – and scored 25 goals. Many of those were memorable strikes but did he find the net in his favourite match for Stranraer?

Q: The easiest place to start, what would be your choice of match?

There were a couple of other choices, like making my debut for Stranraer was a game that I will always remember as well, because it was against a former side, Dunfermline Athletic, and I scored in that game.

I think as well, you look at the position Stranraer are in just now and I always look out for their results. I know they have not had a good season but while I was there we enjoyed quite a successful spell. We made the play-offs both years.

I have gone with Stranraer v Livingston because of the belief we had in the squad at the time. Livingston were, obviously, in the play-offs and came to Stair Park and took an early lead. It would have been easy for the boys to get their heads down and think it was not to be their night but we came back in the way we did and we absolutely battered Livingston that night. We showed the quality we had in the side at the time.

Q: Just to sidestep that briefly, you mentioned your debut against Dunfermline, what other games were on the shortlist?

Stranraer v Ayr United in the play-offs, even though we lost on penalties.

I could have picked any game really during the long spell we went unbeaten to challenge Greenock Morton for the league title that year. For a club like Stranraer to only really lose the title on the last day when Morton thumped Peterhead, it said a lot about us.

A lot of people never really gave us a chance and wrote us off but we knew the ability we had in the team. We took each game at a time and some people maybe thought we punched above our weight but we knew what was in the dressing room and knew what we were capable of. What we had that season was not a surprise to us, although it was a surprise to many.

Q: If we look at the Livingston game, you’ve come through the full league season and you have played 40-45 games including the cups, take me through the build up to the first leg of the play-off. It is a midweek game as well?

I think we had just finished on Saturday (Stranraer defeated Cowdenbeath 1-0 in the final league game, with Mark McGuigan scoring).

There was not really much time to prepare for the game. You would obviously train on a Tuesday and a Thursday. We came through the game on Saturday and you just have to rest up as best as you can and then arrive at Stair Park on the Wednesday night.

It was a massive game for the club. You knew what was at stake and if you cannot get yourself up for big games like that then there is no point in you being there. It was more the belief in the team, we did not really need to do much to get up for the game. We knew that if we applied ourselves the way we could then we stood a chance of upsetting them.

No, not at all. I think if you are the manager you can maybe have a couple of the teams that could finish in the play-offs watched. As a player, there is not really any time to prepare. It is 11 v 11.

We were just preparing for anybody really and it was Livingston that night.

I think as a player you would like to have an advantage going into the second leg.

I am always a believer that you get your first game at home and then you know what you need to do away from home. Sometimes, you go away from home and it is a difficult one because you don’t know whether to go for it or sit in and rely on your home game coming up.

I think a home game, go and win your game, and see what you need to do in the second leg.

Q: Take me through the game itself? It was a Wednesday night, a lovely summer’s evening.

I could not even tell you what the weather was like! I just know there was a good buzz about the place. Stranraer under the lights on a Wednesday night is quite a nice place to play your football.

I remember we did not get off to a great start. Big Jordan White, ex-team mate of mine at Dunfermline, got Livingston off to a flier. Then, we came into our own scoring through big Mark (McGuigan) and a great goal from wee Andy Stirling.

Then, a free-kick from myself took us in 3-1 at half time.

Q: Your goal, is that the one with the infamous celebration?

Yes, it is a game that I will remember for that as well.

I promised my son Rory about Zeg from Blaze and the Monster Machines. He would always give me a toy whether it was a Transformer or whatever and I promised him that if I scored a goal I would take his toy to him as part of the celebration. That night, it was Zeg.

It is things like that that stick with you for life. I’m grateful that Rory has grown up seeing me play in some good games. It is a moment that you want to enjoy with your kids.

I think it was just more of the same.

We could see that Livingston were quite vulnerable but they posed a threat going forward. It was a case where we were in a good position and we did not need to score more but if the chances came we could take them. The chances did come and we took them

If I am right in thinking, they actually scored the next goal (Liam Buchanan made it 3-2) before two late goals from us, which made it comfortable on the night with a good lead going into the second leg.

Q: What is the dressing room like after a game like that? Obviously, any other game you win 5-2 at home and I imagine everyone is chuffed to bits and delighted. You go up the road, etc, but to use the cliché, it is only half time and you have still got the second leg.

Correct. If it was a Saturday game and a league game then it would be different.

At a Stranraer home game, I did not get to enjoy the bus journey with the boys. The boys got on the sauce on their way up the road but, because I came from Dumfries, I travelled myself. So, I missed out.

That’s been something throughout my career. Wherever I have been, I have travelled and I have missed that side of things, but I guarantee if it had been a league game and had been a Saturday then they would have been half drunk halfway up the road.

It was 5-2 on a Wednesday night and knowing the game comes round on the Saturday there were celebrations in the dressing room knowing what we had achieved that night, but knowing it was only halfway we had to be cautious.

We knew we were going to Livingston, on the bigger pitch, in front of their fans, and it was going to be a big test. That turned out to be the case as well.

The 5-2 scoreline definitely played a massive part in progressing through to the finals.