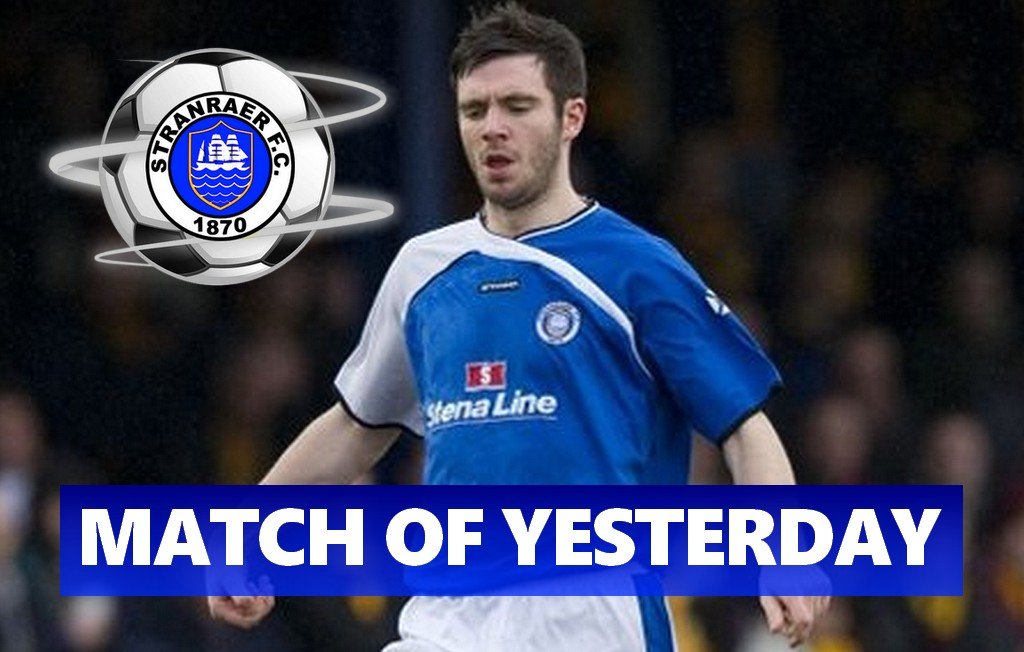 GOALS, celebrations, iconic moments – key incidents stick in the minds of football fans and players despite weeks, months and even years passing.

In the sixth of our new series – Match of Yesterday – we ask Steven Noble for his favourite game during his time with the Blues.

The left sided defender and midfielder, who is now playing for Beith Juniors as well as working as a physio outside of football, made 159 appearances for Stranraer. During that time, he also found the net on five occasions.

Steven: It is a good question. I thought to myself there was not one that immediately stood out. At Peterhead, there was the Challenge Cup Final against Rangers. I was at Stranraer for four-and-a-half years and I was looking through the archives to see if there were any games that stood out. The four-and-a-half years were great. When I signed, we were a good team going for promotion and we got beat in the play-offs by Arbroath. Then disaster struck and there were the financial problems and because of that we had a lot of poor games for a season. I stuck with them and then we found our feet again and the club were really doing well again.

I made my debut as a trialist against Dumbarton but my first start as a signed player was away to Stenhousemuir. I had to get to Hampden Park and meet Derek Ferguson and Keith Knox there, as well as the club secretary at the time, so that I could sign and play that day. We drew 1-1 but it was one of the main games for the play-offs at the time. It was February time and I set up the goal (scored by Michael Mullen). The next day in the newspapers I was named man of the match. There were a lot of my family there watching – my mum, dad, auntie and uncle.

Q: How did you end up at Stranraer?

Steven: I had been full time with Kilmarnock and was 19, just about to turn 20. I was thrown on the scrapheap. Within football, there is a ruthlessness. Kilmarnock boss Jim Jefferies said he did not think I was good enough to play for Kimarnock and would not break into the first team. That was very hard to take. I was a bit depressed and did not know what I was going to do. I got in contact with Stranraer and went in for a trial when Gerry Britton was the boss.

I got the feeling he did not really fancy me as a player. You were being told everything you wanted to hear – that you were doing really well in training but they did not have the budget. Then, all of a sudden, Stephen McConalogue came in and I thought he is not coming for pennies. Probably luckily for me, Gerry left for Partick Thistle and he became head of youth.

I did not want to retire early and just stop playing football. That game against Stenhousemuir gave me a chance and a platform. I signed a one-and-a-half year deal. This was a fresh start and it was probably the last time I played central midfield.

After the game, I remember waking up and seeing myself in the paper and I had never really experienced things like that. I had always been on the bench at Kilmarnock and never got much in the way of press. So, that game against Stenhousemuir is probably my favourite for Stranraer.

Steven: The game against Motherwell in the Scottish Cup (February 5, 2011). We got them at Stair Park and they beat us 2-0. It was a good occasion and they were a good team at that time. They were pushing for a European place. They played a strong team and we did alright. You could go home and watch Sportscene and that was one that stuck out. I felt I played well in that game.

Another one would be the semi-final play-off game against Queen’s Park. We got beat in the final by Albion Rovers. We got beat 3-1 at Cliftonhill and there was a cracking crowd. It would have been a really good day if we did not lose on penalties. I remember the semi-final being a great game and we went into the play-offs on a terrible run. It was something like seven games in a row without a win. You always say to go into the play-offs in form and I remember Stevie Aitken was assistant at the time and he was telling us to get our form up but we just kept losing. We were already confirmed in the play-offs and I have been in that situation with Peterhead. If you don’t go into the play-offs in form, it can be a disaster. Queen’s Park were a good team and we destroyed them in both legs.

I was looking through the scores and one of the other games would be in the Scottish Cup. We played St Cuthbert Wanderers and we beat them 9-0. I remember I never started the game and neither did Michael Moore. We are still good friends and I was away to London with him for the NFL recently. We were expected to completely steamroller them and it was one of those games where it was a scrappy game. We were winning 3-0 or 4-0 and the manager brought on myself and Michael with about half an hour to go. We still speak about it, how the Paisley boys were brought on. Michael ran through and Craig Malcolm scored a hat-trick when we came on. Michael kept saying things in the dressing room about how they needed the Paisley boys to go through.

Q: What do you remember of the morning of the Stenhousemuir game?

Steven: What reminded me about the game was my gran passed away a few weeks ago. My mum and dad had been up cleaning the house and she had a picture of me holding the Stranraer strip, with me, Derek Ferguson and Keith Knox that day. The picture was taken to be put on the website and then I went straight from Hampden to Stenhousemuir and started the game. I had a rough idea I would be starting. Derek said to me that I had a good chance of starting and that was why he wanted the deal signed. I played in a trial game and I was used as substitute as a trialist. He said I was going to start the game.

Q: What do you remember of that season?

Steven: It was a funny one. I played most of the games. I played a lot of games at centre half that season, left back and left midfield. I knew James Creaney from the Killie days and still keep in touch with him. He is one of my patients at my physiotherapy clinic now. I have known him since boys’ club level and I was trying to get his position. I played right until the end of the season and started the new season before the financial worries came in. Then it was as if Derek Ferguson did not fancy me and I was sitting in the stands against Brechin in the fourth or fifth game of the season. I was thinking ‘I’m out of the picture here’. It is hard to take, it is rejection again but as I would tell myself now, bide your time. I managed to get back into the team and had no intention of leaving.