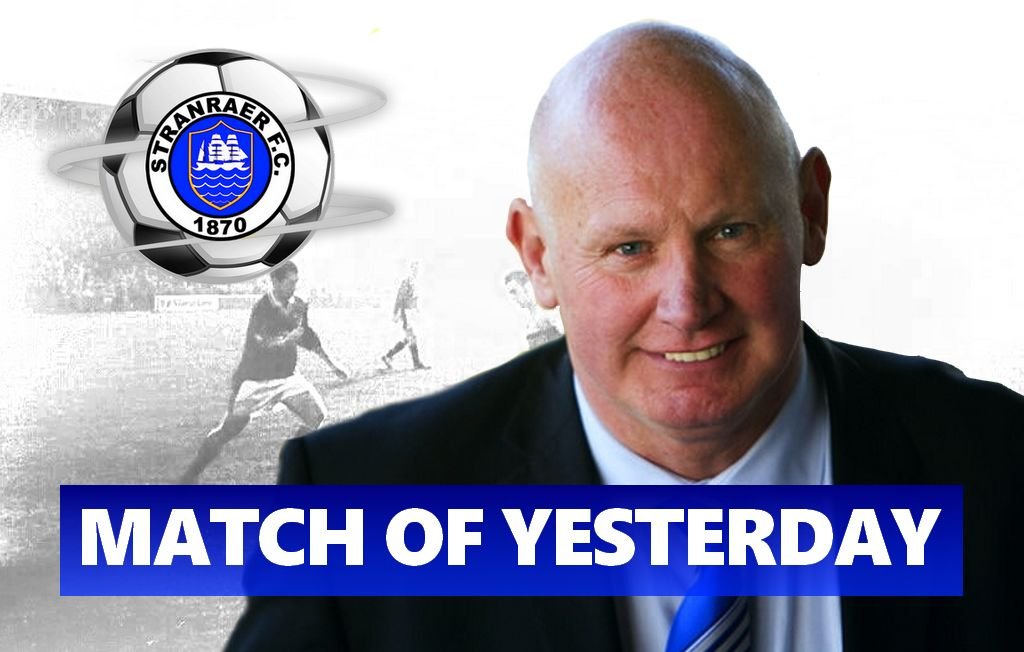 In the third of our new series – Match of Yesterday – we ask Stuart Millar for his favourite game during his time with the Blues.

The former assistant manager, who is now the club’s director of football, enjoyed three memorable years alongside Neil Watt between 2003 and 2006.

Stuart: There are two and it is very difficult to break it down. There was the day we won the league when we beat Albion Rovers (Stranraer won 4-0 in May 2004). There was that day where we had to win to win the league while Stirling Albion were chalking up a big win, I think at Cowdenbeath (Stirling won 5-0 at Central Park). The other was Stranraer against Morton when we needed a point to win promotion, which was a great achievement against a Morton side, who were full time with a good budget and we had guys that had just come up the year before. Probably, the Morton game was the most satisfying because it was totally unexpected.

Allan Jenkins’ goal was obviously the highlight for me. I remember at the end, Brian Winter was the referee, and I was shouting ‘how long to go? Come on!’. At the end, he said: ‘Stuart, I only added on two and a half minutes’. It seemed like a lifetime. That game in particular, I think, more so than Albion Rovers because we had that game kind of won early on by scoring a couple of goals. Kevin Finlayson scored a great goal that day and David Graham, no doubt, would have scored a goal, so, it would probably be the Morton game which clinched promotion to what is now the Championship.

The club had not been in that league before and I know we finished in the play-offs the following year but even then that was a great achievement. Brechin beat us by about 12 points to win the league and I still think if we had not sold David Graham it would have been a lot closer. So, the following season, we were about 15 points ahead of Brechin. Getting in the play-offs against Partick Thistle and beating Partick in the second game. Obviously, we lost it really in the first game. We had a couple of red cards but the team was on their knees at that point because of injuries and energy levels were very low. We were very fatigued and that was Neil Watt and I’s last game.

It was emotional. It was three years but it felt like 30 years. During that spell, we went a year undefeated at home, which was a marvellous achievement. I think we brought a bit of credibility back to the club after their relegation into the lowest league. I think nine of our players went full-time, which was marvellous for the development of players and unearthing players like Jenkins and David Graham away for £50,000 apiece. Michael McGovern came on loan from Celtic and the rest is history with him. Everything about it. We had magnificent characters like Dexi Wingate, Murray Henderson, Stevie Aitken, who was very influential in the three years, Michael Moore – if you are ever in the trenches, you want someone like him next to you – Lee Sharp was Mr Consistency, Stephen Swift – all these players came through on the journey. It was just a wonderful time at the club but all the credit goes to Neil Watt to be totally honest. Neil brought it all together. His man management was second to none. I was the one that was closer to the players because the assistant tends to be that but we just had a great team spirit. Walter Cannon (the club’s physio) as well and just everything about it. It was just a marvellous time to be associated with Stranraer.

Stuart: The management team is probably more nervous than the players. I remember the week leading up to the Morton game. We did not do any training really. We went, thankfully not me, but the players went for a sauna, a jacuzzi and all week never trained. You could not get any fitness levels out of them that week, it was just a matter of relaxing. You were against a full time team on the Saturday, who had the luxury of not working during the week. Our guys were still working and so we did absolutely nothing. We took them to a spa, we took them to a health club and as I said there was a sauna, there was a jacuzzi, there was swimming – they were just messing about for the full week. Thankfully, they had the energy levels about them to get the result that was required. We used to be concerned about certain games and we used to say to Dexi on the team bus: ‘We’re a wee bit concerned’. He would say: ‘Just to let you know, there’s no need to be concerned today, we will be alright’. That was reassuring from him. There was just a mindset with that group of players that they were not going to get beat. They were willing to give everything. We were well looked after. Neil made sure we all had suits and were looked after at the best accommodation when we went to the likes of Peterhead. It was just a fantastic club, who I obviously have such fond memories of – hence, the reason I came back all these years later. The club means so much to you because of that enjoyable spell we had.

Q: How important was it that having gone behind against Morton that Jenkins scored in such close proximity?

Stuart: I think it was very important because their goal certainly gave Morton a lift. Peter Weatherson scored from a corner coming in and it gave them a huge lift. It gave their fanbase a huge lift. Jenkins scoring – and the picture is still in Stair Park of him scoring and standing on the advertising boards and celebrating the goal – it was very important we scored right away. I remember at half time Michael Moore was in the dressing room and talking to himself ‘you can’t let it slip now, come on’. The players were so motivated. I cannot remember much about the teamtalk at all at half time. All I can remember is at the end, we did it.

I think we were crying tears of emotion or relief that we had, that wee Stranraer had, done it and got into what is now the Championship. Neil and I spoke about quitting after that. That was really a big decision that had to get made because we were going to walk away because you cannot top it. What I said to Neil was ‘imagine someone else standing on that touchline in the First Division next season after you getting them there’. I think that was the clincher. We knew it would affect our reputation because we knew we would be in relegation bother but we thought let us go and give it one more year. We did think long and hard about walking away and thinking ‘back to back promotions, great, we can walk away’. Ultimately, we did not want to give somebody that glory after how hard we had worked.

Stuart: I don’t drink and have never drank in my life but, I tell you, I felt drunk that night! It was just celebrations that we had achieved it. I think from a management point of view, it is a huge relief. I’ve got to say, I think we were involved in about 150 games with Stranraer and I never really enjoyed any of them! It is because of the emotion and the tension. Even going into the last minute of a game, you’ve not got the board saying three or four minutes to be played. You’ve not got a fourth official saying to the referee that there are 30 seconds to go, ten seconds to go or the game is finished. We’ve not got that in our league and so you don’t know how long they are going to add on.

We’ve worked hard to get a draw at Dens Park and all it would take is a 94th minute winner and we have lost the game. I cannot say I enjoyed many games. Obviously, I enjoyed it at the end when we had achieved something. I honestly could not tell you what we did that night. I remember when we won the league, we had a function somewhere and we got all our medals. I think the club was given 20 medals and it was Neil, myself, Walter and I think Graham Rodgers took one as well so there were 16 medals for the players. That particular season, I think 12 of the players had played at least 30 games. That was easy and then it was a matter of filling in the gaps on appearance wise. It was just a fantastic achievement. I was fortunate in later years with Ross County to win the league a couple of times and get to a Scottish Cup final. The Stranraer achievement, first time as a coach, again, I was fortunate in the Juniors to have four or five promotions, when you are senior it is a totally different beast you are dealing with. Fantastic memories, fantastic people – Stranraer have not got a lot but they give you everything they have got. There is just a great affinity with the club and long may that continue.