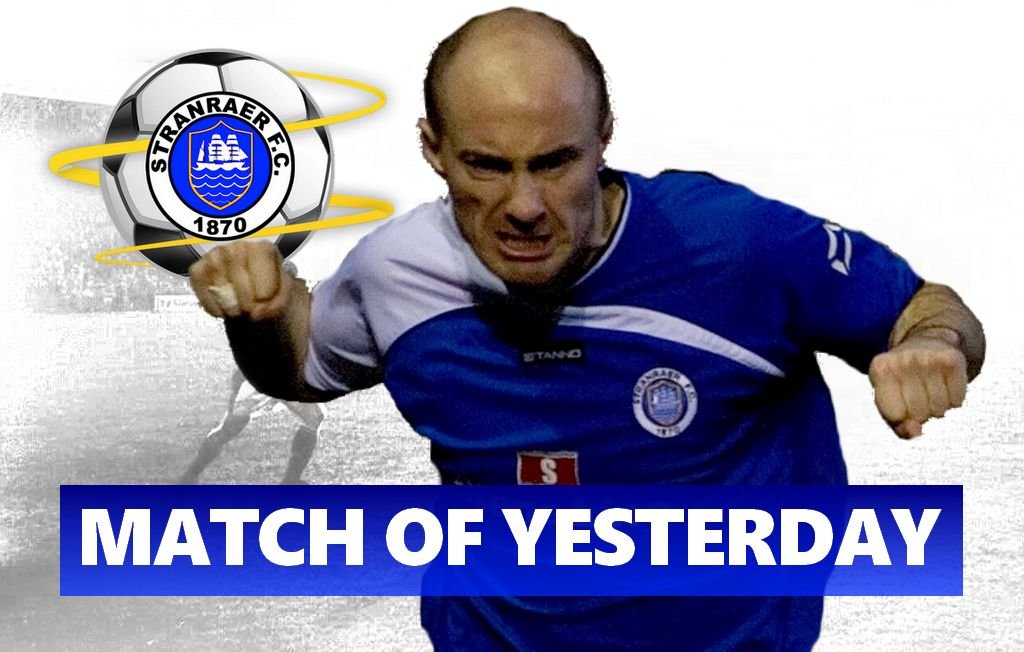 In the second of our new series – Match of Yesterday – we ask Michael Moore for his favourite game during his time with the Blues. The striker made 298 appearances and scored 94 goals during his spell at Stair Park.

Michael: I would maybe say the first game under Neil Watt (2 August 2003) against Queen of the South.

The season before that we got relegated under Billy McLaren. I had a good season that year but it was a new era under Neil. He came in and brought in half a new team and obviously went on to win the league.

The game against Queen of the South started the season and gave us belief. They were in the First Division and we were in the bottom division. They should really beat us, simple as that, but we beat them 2-1 and I scored both.

That is the game that sticks in the mind with the fans as well. We don’t beat Queens too often and I scored two goals to beat them and they were a high-flying side.

It set us up for a high-flying season and I got 27 goals, was named player of the year and we won the league.

Michael: There are that many games and if you asked fans I am sure they would each say something different.

I would probably say the Queen of the South game is the main one but I scored a hat-trick against Hamilton Academicals in a 5-4 win in the First Division (26 December 2005). I should have scored four in that game and had one ruled out, which was not offside.

That changed when we started winning friendlies and playing competitive games. The mindset changed and we were not there just to make up the numbers and finish somewhere ok in the table. We wanted to win the league and we had an excellent team.

At first, I was a bit sceptical about it but it was one of those where we played a derby and we were really up for it. It was a sunny day with a brilliant crowd and you could not pick a better game to start the season than against your rivals.

We did not have anything to lose and we just had a really good support and the boys were ready. We were a fit, physical team and played that way. We played some great stuff as well and that really is what happened.

We totally dominated the game and should have won by more than just 2-1. It set the side up for a brilliant season. I always thought I could get the better of the defender or my rival and loads of the players had that same mindset.

Q: What do you remember about the goals?

Michael: The first goal was about midway through the first half, probably about 30 minutes. I’ve still got the newspaper cutting in the house. My mum cut them out and I have got the picture of myself and Kevin Finlayson from the back page of the Free Press celebrating. I have still got it in the house!

The corner came in to the back post and Frazer Wright went up. I have managed to pull my man out of the way and headed home from about seven yards.

The second goal was in the second half and the ball broke to me and I have just slipped Jim Thomson a dummy and the goalkeeper came out to me. He has gone down a bit early and I just glided the ball into the top corner.

Derek Lyle pulled one back near the end. I can still remember the game vividly.

Michael: I can remember Neil Watt was videoing the games and that never happened at our level. They were being done on old cassette tapes and I remember watching the game back. Neil was asking who wanted copies of the tape in the dressing room. It all just feels like yesterday.

Michael: Stranraer fans – they might not be too many in numbers at times but they are just as passionate as any fan. They are fans who travel to Peterhead, to Elgin and it is an unbelievable, brilliant support.

It felt back then that there were more supporters than now and I don’t know why that is. The game was a derby game, with a big crowd and Queens brought a big crowd down as well. It was good weather, a derby and the first game of the season.

Michael: We went on to win the league!

We had a tough start to the league and drew a couple of the opening games. We drew 1-1 at Albion Rovers (Paul Kerr scored), lost to Stirling (0-1) and drew with Gretna (1-1 with Alan Grant scoring). They were tricky games but we had the mindset where we thought if we can beat Queens why could we not take the league by storm and go on and win it?

We had a lot of confident players in the team. We were not arrogant but we believed in ourselves and our ability. They knew they were good players and we went on to achieve the league.

Stranraer is always the first result I look for. I loved the club to bits and hopefully I can get down to Stair Park. I have not been down in years after being down every second Saturday for ten years.

I have not been down in about six years and will need to get down and say hello to everyone.

*Former Blues winger Willie Gibson, then just a teenager, made his senior debut as a second half substitute for Queens.