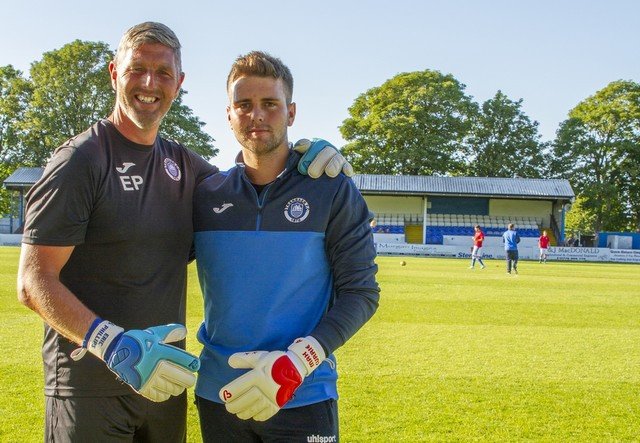 GOALKEEPER Max Currie has revealed he went it alone for the penalty shoot-out on Saturday after ignoring the advice of goalkeeping coach Eric Philips.

The Stranraer number one was the hero, saving spot kicks from Elliot Frear and then Andrew Rose to give the Blues an unexpected bonus point on Saturday.

Isaac Layne’s second half strike cancelled out Peter Hartley’s opener to send the tie to penalties, where Currie shone.

He said: “Big Eric Phillips was trying to talk to me at the end of the game, before the penalty shoot-out.

“Going into the penalty shoot-out, it is one of those where the player can put it anywhere.

“I was not really thinking about it too much and said ‘don’t talk to me about where you have seen the players put the penalty, just let me go out and make a decision at the time’.

“I think it is just the player goes up and picks at the time.

“Players can change their mind all the time.

“At the end of the game, he said to me he knew I would have got it right.

“But I laughed and asked why he wanted to tell me about the penalties in the first place.”

Currie is starting off the season as Stranraer’s first choice for the first time, having played understudy to Cameron Belford, David McGurn and Connor Brennan.

The 21-year-old joined the Blues in the summer of 2015 after leaving Motherwell, and he admitted it was nice to get the win in front of the travelling support in the second half.

He added: “It makes the win a wee bit more pleasurable because the fans behind the goal were giving me a bit of stick.

“They were giving it to me quite tight behind the goals.”

Now, Stranraer and Currie’s attention turns to Tuesday evening and a clash with Clyde.

It also marks Max going toe to toe – or glove to glove – with older brother, Blair.

The two shotstoppers have played against each other before, with Max coming out on top in a 2-1 win over Annan in July 2016.