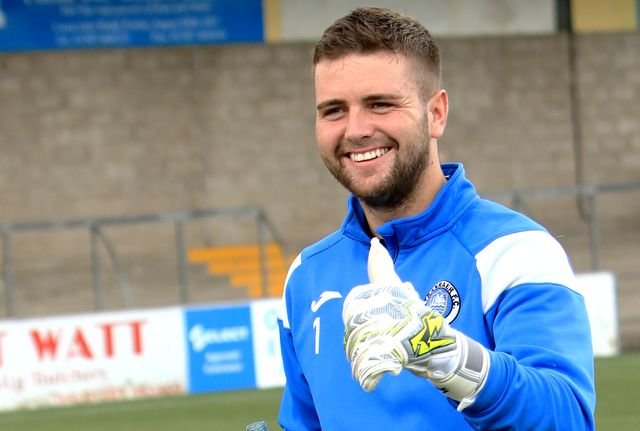 THE countdown is officially under way with Stranraer heading to Ibrox in just a few days’ time.

The visitors will be considered rank outsiders by the vast majority, with many predicting a straight-forward win for Rangers.

One man looking to stop that from happening is former Rangers man Max Currie.

The Stranraer number one spent six years with the 33-time Scottish Cup winners and was “buzzing” for Friday evening’s game.

He said: “I think it is right that very few will give us a chance in the game.

“I think the manager’s plans will be to go there and try to keep it tight at the back.

“Just to drag the game on, waste time when it is there to be wasted and hopefully we can nick a goal or nick a result of some sort, which is possible.

“A lot of people have got us written off but you still need to have a bit of hope.”

Currie, along with his team-mates, was left on the sidelines on Saturday after the scheduled match with Montrose fell victim to the weather.

Instead, the squad had a training session in Irvine.

Speaking on Saturday afternoon, 22-year-old Currie said: “You can see today in training that everybody is buzzing about.

“I think everybody is wanting to catch the manager’s eye and hopefully give the manager something to think about.”

Currie was on the bench the last time Stranraer visited Ibrox, with Cameron Belford between the sticks.

The hosts were 3-0 winners then, with Martyn Waghorn on target twice before Niko Kranjcar scored after the break.

The Stranraer goalkeeper felt Rangers, who are undefeated in five matches, were stronger now than then.

However, many would have written the visitors off on Boxing Day 2013.

Jamie Longworth’s late goal created a little piece of history as Stranraer took a point from a Rangers side who had won their previous 21 games.

Scott Robertson, Grant Gallagher and Andy Stirling were all part of Stevie Aitken’s team that day and the experience of them, plus men like Jamie Hamill and Ryan Thomson, will likely prove useful.

Currie said: “They will be helpful, especially with our team being made up of a lot of young players just now.

“But everybody knows their job.

“It is not like we would be relying on them.

“Everybody knows their job and knows what they need to do on the park.

“The experienced players maybe can talk to them a bit more, give them information, but I don’t think it is too vital.

“The atmosphere is going to be a bit different.

“I was speaking to Shaun Niven and he said before the tickets went on sale to the general public there was something like 27,000 tickets sold.

“It is just something that you have got to rise to.”

Very few would have given the Blues much of a chance in the previous round of the Scottish Cup this season when they welcomed Dunfermline Athletic.

James Hilton’s penalty sent the Fife side tumbling out of the cup, with Stranraer rewarded with the tie at Ibrox.

“It was probably the same there and a lot of people would have had us written off against Dunfermline, who are doing well in the Championship.

“Going into that game, the players had a bit of belief that we could beat Dunfermline.

“Hopefully, we can get a bit of luck come Friday.”