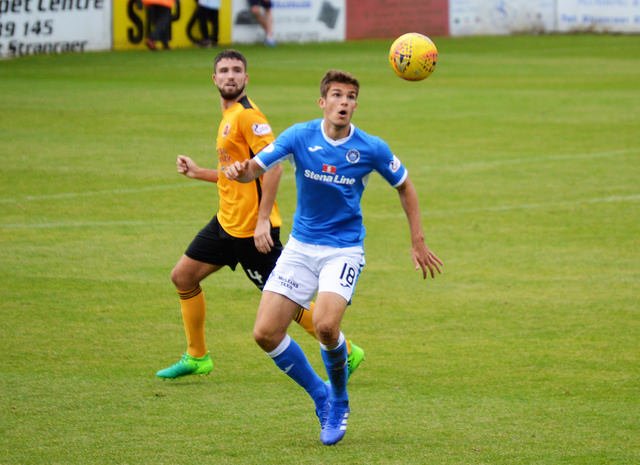 AS FAR as dream debuts go, Innes Cameron’s must be up there.

The young striker only joined Stranraer last Thursday night and was named as a substitute for the club’s clash with Stenhousemuir on Saturday.

Come 60 minutes, Stevie Farrell gave him the call that he was replacing Isaac Layne.

Five minutes later and Cameron was rolling the ball into the empty net after a run from near the halfway line.

He said: “It was an enjoyable debut.

“It was a tough game, a wee bit scrappy, but we got the result.

“You want to get that first goal as quickly as possible and it was good to get it as early as I did.

“It came today and I just have to keep going now.

“I was a wee bit fortunate with the goal but I was there to stick it away.”

The frontman has joined on loan from Kilmarnock, initially until the New Year.

The deal also saw his Rugby Park team-mate Daniel Higgins make the trip south on the A77 on a loan deal.

The 20-year-old has experience in the top flight with Dundee but also League One with Airdrie and also made his Stranraer debut in the 2-0 victory over the Warriors last time out.

Cameron, who turned 18 last month, is no stranger to the Rugby Park first team and has made five substitute appearances, including in a win over Hearts on the final day of last season.

He said: “I went down to training with Stranraer on Thursday after getting the loan move sorted out.

“They are a great bunch of boys and I am just happy to get started.

“I just want to play games and get some senior football under my belt.

“I was lucky enough to play a few games for Killie and I am coming down here to increase my learning; get playing against real men.

“It was a good start today and hopefully we keep it going.”

However, he is also no stranger to Wigtownshire either and has his very own connections to the area.

He added: “My grandparents on my mum’s side of the family are from here.

“It is not like I have not done the bus journey many times before.

“It is a good part of the country and I am liking it.”