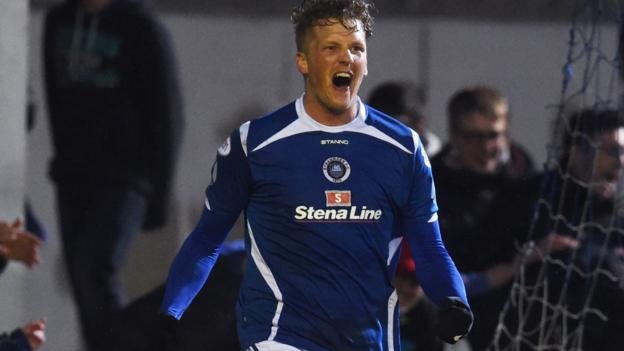 STATISTICS only tell half the story when it comes to Willie Gibson’s time at Stranraer.

Ninety-eight games and 25 goals over two spells is a good return from midfield, but for the Stair Park faithful he achieved much more than that.

When Stranraer were struggling, Gibson seemed to have a knack of popping up with something special.

However, when Stevie Farrell sat down with his players last week and outlined his plans for next season, the winger would announce his departure the following day.

Gibson told the official website: “All the players were in for a chat and the manager was offering boys contracts and obviously releasing a few.

“He put a contract in front of me and I was disappointed in that offer, so, that was behind my decision to leave.

“The manager had said basically the club had to make cuts for certain reasons and that was basically the best they could offer me.

“I was not going in asking for more money – it is always the question when players decline contracts: ‘are they wanting more money?’

The midfielder highlighted he had a young family, which had to be a priority when it came to negotiating any new deal.

It is unclear what the future holds for Gibson or Sam McCloskey, Giuliano Morena and Craig Pettigrew, who were all confirmed as leaving last week, with striker Mark McGuigan signing for Stenhousemuir.

The Dumfries man brought the curtain down on his time at the club against East Fife in typical fashion.

Stranraer needed at least a point to guarantee survival, and Gibson came up with two moments of magic – creating assists for Craig Malcolm and Amadou Kassarate – to ensure the season finished with a victory.

One thing Farrell will have a hard time to replace for next season is Gibson’s ability from set pieces and long range.

The 32 year old finished the season as the club’s second top scorer – behind Malcolm – with ten goals.

Gibson said: “I don’t think I scored a bad goal for Stranraer!

“It seemed to be either a free kick or a shot from outside the box, I don’t think I scored one from inside the box and I can look back and enjoy the goals.

“The goal against Airdrie (in April 2016) was the club’s goal of the season and probably the best goal in my career.

“To step inside two players and hit it into the top corner from 35 or 40 yards – you cannot get much better than that.

“This season, the free kick away to Alloa was one of my best free kicks. Again, it was from about 35 yards.

“I don’t think I scored many tap-ins.”