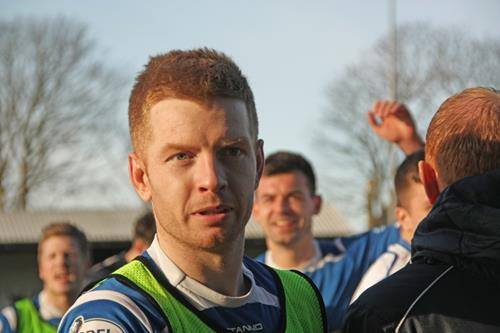 FACTS speak for themselves when it comes to Craig Malcolm’s time at Stranraer.

More than 100 goals over the course of six years and the club’s top scorer in five of those six seasons.

Second top scorer in the club’s history and plenty of important goals at vital times as well.

Above the goals though, when the going got tough Malcolm was always the focal point and a player who managers could turn to and know they would get a response.

The word ‘legend’ might be thrown about nowadays but many a Stranraer fan will have been bitterly disappointed when the striker said farewell to the club for a second time at the end of last week.

He said: “I would just like to say thank you to the fans for everything they have done over my six seasons at the club.

“They have been great through the good times and bad times.

“That is when you appreciate them the most, when then you are going through the bad times.

“I want to thank them for everything they have done and, hopefully, next season they have something to cheer.”

Manager Stevie Farrell had offered Malcolm a new deal but the frontman has turned the deal down.

Where the 30 year old ends up remains to be seen but he described the decision to leave as “horrible”.

He said: “Obviously, it is pretty tough decision but it is mainly for family reasons more than anything else.

“My girlfriend is due to give birth in November and being closer to home on a Saturday allows me to help out a bit more.

“It was a horrible decision.

“Selfishly, I wanted to stay on having been there for so long.

“I enjoyed it so much and I hope I have made the right decision; it was not easy that’s for sure.”

The striker, who lives in East Kilbride, began his career at Raith Rovers before a spell in junior football.

A second bite of the senior football cherry came when Keith Knox and Stevie Aitken signed the frontman.

It saw three years packed with goals, including a double on the last day of the season away to Stenhousemuir to seal Second Division football in 2013.

A single season at Ayr United would follow and Malcolm added: “I have left before and did not enjoy it as much and I came back after a season.

“That made the decision this time even harder.

“The fans have been excellent since the first day I signed and they are very patient and supportive.”

He also took time to praise those behind the scenes, who had been supportive figures.

Malcolm said: “Guys like Robert Rice, you speak to them every week and they go out of their way to help you and I am very grateful to them over the six years.”