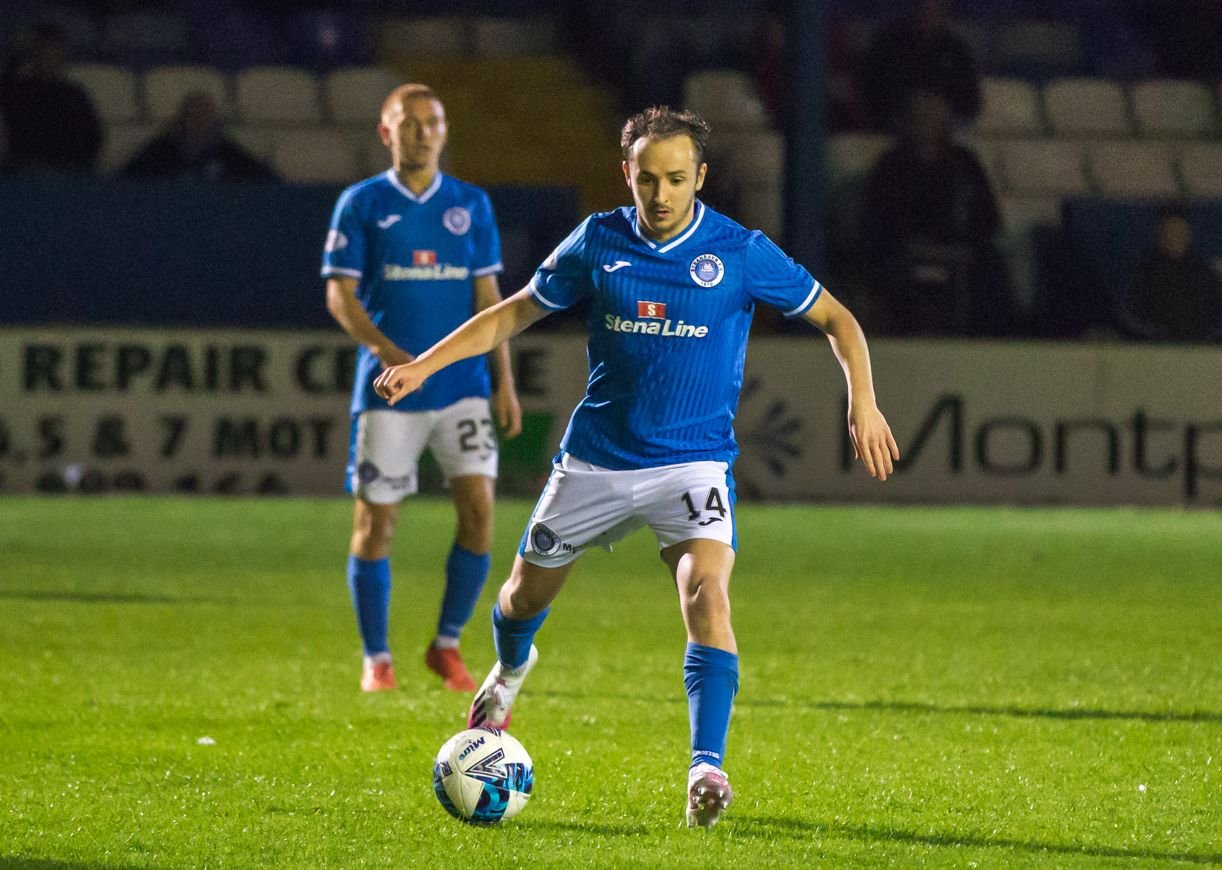 Dean Hawkshaw is calling for his side to turn words into action and move up the table.

A run of three consecutive defeats has left Stranraer just three points above Bonnyrigg Rose at the bottom of League Two.

On the other hand, the Blues are only six points adrift of Elgin City in third spot.

Hawkshaw is hoping his team can ease away from the bottom and reignite their promotion bid, starting with a trip to East Fife.

He said: “There is still plenty of football to play but it is important we feel hungry and desire.

“We need points sooner rather than later and everybody is aware we need to pick up points.

“We need to be putting words into action and if we can get a run together we can go and push up the league.

“I’m hoping it is going to be sooner rather than later and to contribute to it.

“It is even more frustrating watching from the side and you cannot do anything.”

The former Kilmarnock midfielder had been playing some of his best football in a Stranraer shirt prior to the turn of the year.

Eighteen appearances had yielded two goals, a further two assists and a key spot in the midfield of Jamie Hamill’s side.

However, after missing the festive clash with Bonnyrigg Rose due to work commitments, he suffered a serious knee injury in training.

Hawkshaw joined Luke Scullion and Matty Grant in the stand at Stair Park as the hosts lost out to Albion Rovers seven days ago.

Fellow midfielder Paul Woods is also on the injury list but Hawkshaw was hopeful he would be back again before the end of the season.

He was confident the injury was not as bad as that suffered by Woods but was waiting on further feedback from medical experts.

Hawkshaw spoke of the frustration of being stuck on the sidelines and being unable to help his team-mates.

He said: “You are sitting watching and cannot do anything about it.

“We are in the dressing room before the game but it is down to the boys that are not injured.

“I am hoping to get back sooner rather than later.”

Twice Stranraer led against East Fife and twice the Fifers found equalisers back in August.

Paul Woods had swept home after a great through ball from Anton Brady, before Ryan Schiavone’s deflected effort flew beyond Luke Scullion.

Luke Watt bundled in from close range before the break but was then sent off for an off the ball tangle in the visitors’ box midway through the second half.

It looked like the Blues would hold out for three points but substitute Jack Healy scored deep into stoppage time to salvage a point.

1. Stranraer’s last win at Bayview Stadium came in April 2018. The Blues had led 3-0 thanks to a first half strike from Scott Agnew and a double from Grant Anderson early in the second half. However, the hosts fought back to ensure a nervy finish as Craig Watson and Jonathan Page cut the deficit.

2. Former Stranraer midfielder Michael Donald celebrates his 33rd birthday on Friday. The former Ayr United man made his debut in a blue shirt against East Fife in January 2017. That was also Stevie Farrell’s first game in charge. The game finished goalless with Donald, playing as a trialist, coming off the bench to replace Ryan Thomson for the final 22 minutes.

3. Scott Agnew, now player/assistant manager at East Fife, is in his second spell with the club. He also had two spells for the Blues.

4. Stranraer scored in the first and last minute to beat East Fife away from home in 2013. Jamie Longworth opened the scoring in the first 60 seconds before Liam Buchanan levelled things before the break. However, a Steven Bell header in stoppage time ensured the points left with Stranraer. The visiting team that day was: Mitchell, Macgregor, Docherty, Robertson, McKeown, Aitken, Gallagher, Winter (Bell 69), McKenna (Grehan 63), Longworth (Borris 89), Stirling. Not used: Kinnaird, Corcoran and Fahey.

5. At least one meeting between Stranraer and East Fife has finished in a draw in each season they have played since 2008/09. Then, the Fifers took nine points out of a possible 12. Stranraer’s only win came in Fife. Kevin Nicoll and Stephen McConalogue scored in a 2-1 win.

Tickets for the contest at Bayview are now available via the home club’s online ticketing platform.

There are no cash turnstiles at Bayview and supporters are strongly encouraged to purchase their tickets online. Online sales are available right up until kick off. Tickets can also be purchased over the phone by calling 01333 426323 or directly from the club office.

Please note, parent and child tickets cannot be purchased online and should be bought directly from the club office.

If you’re outside the UK and Ireland, the excellent East Fife TV has coverage for overseas subscribers at their monthly subscription rate.