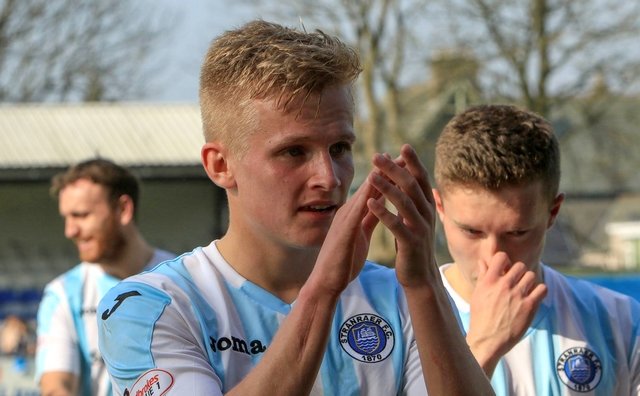 GOALSCORER Alistair McCann has promised Stranraer fans the side will try to finish the season strongly, despite securing League One football season last weekend.

However, Stevie Farrell’s men can still climb the table and even finish as high as fifth – if they get two good results against Dumbarton, this Saturday, and Airdrieonians.

McCann stressed there would be no letting up, despite the safety being secured.

He said: “We just keep this run going.

“It is like every normal game, you don’t take your foot off the gas.

Saturday was a day of firsts as Mark Lamont, McCann and Cameron Elliott notched up their first goals for the club.

Lamont had put the Blues in front before Elliott set up the on-loan McCann to double Stranraer’s advantage.

The St Johnstone teenager said: “It was about time I scored as well.

“It was good to get in the box and it just fell to me.

“I put my foot through it and it was a good feeling.”

McCann felt his side “deserved” League One football on the back of recent performances, which has included victory over Forfar and Raith Rovers.

The midfielder, who has formed an impressive partnership with Kyle Turner in the heart of the Stranraer midfield, said: “We deserved it, to be honest, and we are finally getting our rewards.

“It is good to get us safe with a few games left.”

Early strikes from Lamont and McCann set the tone for the day as Stranraer, eventually, ran out comfortable winners.

McCann added: “We were all over them and made it count with two early goals.

“That just secured it from there.

“It is just game management and not giving them anything.

“If they get a goal then they can start coming back at us.

McCann felt his dozen games in a Stranraer shirt had improved him as a player as he attempts to force his way into the McDiarmid Park team.

The 19-year-old made his debut for Tommy Wright’s team in January last year after replacing Murray Davidson in a Scottish Cup clash with Albion Rovers.

Since then, he has made a handful of appearances and now he is targeting more minutes in the Perth first team.

He said: “For me, personally, going back to St Johnstone I feel more confident and the loan spell has improved me so much.

“To actually have something to play for, first team football, it is like night and day compared to reserves, to be honest.”