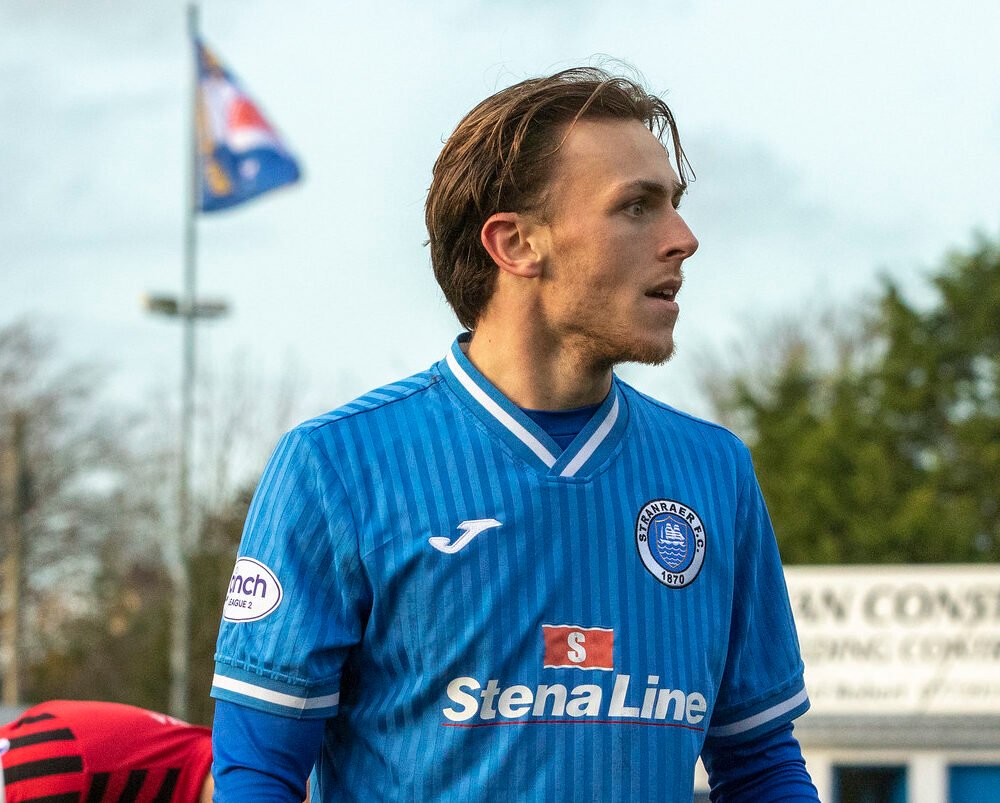 Former Annan man Broque Watson believes Stranraer are “more than capable” of putting a run together to reach the play-offs.

The Blues trail fourth placed Edinburgh City by eight points going into the last quarter of the season.

With nine games left to play, time is running out for the club to reach the top four in Jamie Hamill’s first season in charge.

Watson, who joined Stranraer from Cove Rangers in August, said: “We could go on a run from now until the end of the season.

“All the games are winnable in the league.

“We are more than capable of going on a run like that.

“We want to do our best to catch Edinburgh City.

“We will have to get a good run of form from now until the end of the season to be up there.

“We need to get three points on Saturday away to Annan.

“They have had a good season but we will look to go there to win the game.

“Hopefully, we can win the game and push on from there.”

Two of the three meetings between Stranraer and Annan this campaign have finished in draws.

On both those occasions, the Stair Park side led going into the final five minutes but could not hold on for all three points.

Watson scored in the last meeting in Wigtownshire and was hopeful he would get the chance again to find the net against his former side.

Minutes have been scarce for the former Celtic youngster, who has come off the bench in the last four games and played a total of 79 minutes.

He vowed to keep working hard in training to ensure he was ready when the call came.

Many of his appearances this campaign have come up front, partnering good friend Tommy Muir.

Watson said: “I’m normally in behind the striker or out wide but most of my games this season, I’ve played 90 per cent of the games as a striker.

“Every player wants to improve their goalscoring form.

“If it comes to it and the ball falls to me then I will be ready for it.

“If I do get back into the team, I need to make sure the position is mine and just cement it.

“Obviously, in the past couple of weeks I have been on the bench and I need to make an impact once I do get to play and to keep myself in the team.”

Ten-man Annan Athletic broke Stranraer hearts with a late equaliser at the beginning of January.

Paul Woods did well down the left and cut the ball back into the box, Annan failed to clear and Broque Watson was on hand to score against his former club.

That 17th minute goal should have been added to when Stranraer were awarded a penalty before the break. Charlie Barnes was sent off for blocking Scott Robertson’s goalbound shot with a hand but former Stranraer man Greg Fleming saved Grant Gallagher’s spot kick.

1. A goalless draw last weekend was something of a rarity for Stranraer fans. The last 0-0 at Stair Park in the league was on October 19, 2019, against Dumbarton. You need to go back a lot further for the last time Stranraer contested consecutive goalless draws. That was towards the end of the 2004/05 season. Stranraer drew 0-0 at home to Forfar and followed it up with the same scoreline away to Ayr United. The Stranraer team at Somerset Park was: McGovern, Wright, Swift, Henderson, Sharp, Gaughan, Jenkins (Fraser 70), McPhee, Aitken, Finlayson, McManus (McCutcheon 75). Not used: Wingate, Guy and McCondichie.

2. Positively, Stranraer and Annan have never contested a goalless draw in their 20 meetings.

4. In fact, you need to go back to July 2016 for a winner over 90 minutes in games between the two teams at Galabank. On that occasion, Christian Nadé and Frank McKeown scored as Brian Reid’s second season in charge got off to a winning start. Przemyslaw Dachnowicz scored for the Galabankies.

5. The last time Stranraer drew three games in a row was in February 2020, shortly before the coronavirus pandemic forced the shutdown of football. Stevie Farrell’s team drew with Falkirk (1-1), Raith Rovers (1-1) and Forfar Athletic (1-1).