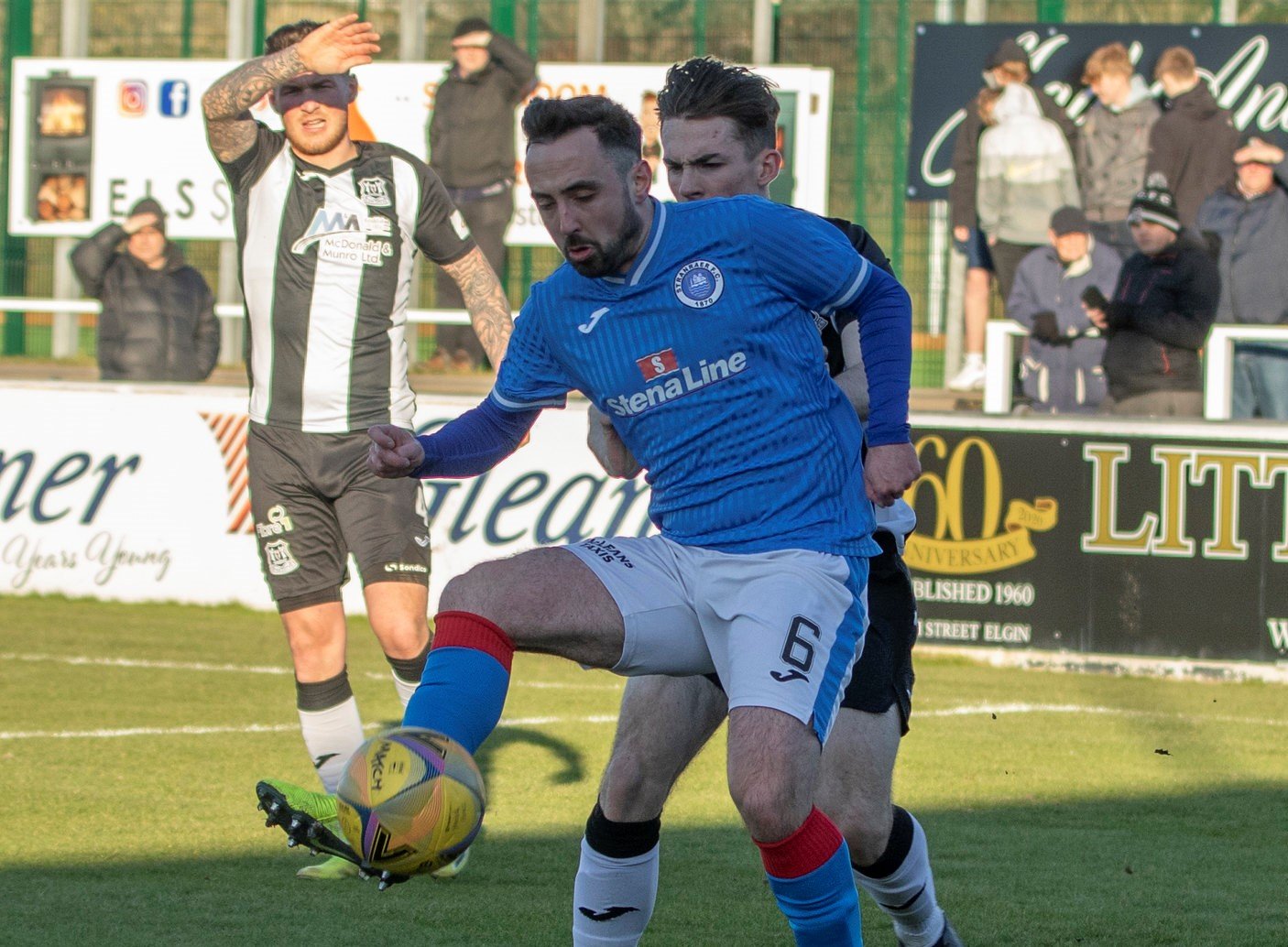 Fully fit once again, Anton Brady is hoping to cement his place in the Stranraer midfield.

The former Queen’s Park man started his first game of 2022 at Elgin last weekend as the Blues picked up a 2-1 win.

Brady revealed he had previously been suffering from the coronavirus but was feeling good once again.

He said: “I think I’ve done quite well since signing for the club.

“I started off for a few months playing well and then I got Covid just after Christmas, which meant I was out for four or five games.

“You want to get on the pitch and help the boys out but the boys have been doing well.

“I had to bide my time and wait for it and now hopefully I can stay in the team.

“I tested positive the Thursday before the Annan game and for the first two days I had a sore head and was aching.

“After that I was fine but then when I came back to training it was hard to get my breath for the first couple of training sessions.

“I was struggling to get going.”

Brady was one of four players, alongside Dean Hawkshaw, Darryl Duffy and Sean McIntosh, brought into the team for the trip to Borough Briggs.

Twenty-eight-year-old Brady described the triumph as “a big win” but felt it was one which could have been more comfortable.

He said: “I think if you look at the three or four good chances, if it had finished 4-1 or 5-1 then I don’t think they could have complained.

“You look at a lot of the games and we are creating a lot of chances and then getting killed with a 10 minute spell where teams are punishing us.”

Victory also allowed the Blues to close the gap on today’s visitors Stenhousemuir to two points, although the Ochilview team have two games in hand.

Brady scored in the last meeting between the two sides and was keen to see the Blues put together a run of form, which could see them mount a challenge for the top four.

A goal down to former Blue Thomas Orr’s early goal, Stranraer bounced back in emphatic fashion at Ochilview Park.

Orr was given too much room in the box to control a high ball before firing past Jack Baker. The lead lasted 17 minutes and the Blues would be 3-1 up before the break.

Scott Robertson volleyed home when the hosts failed to clear a corner and Anton Brady then scored his first for the club from outside the box.

Ayrton Sonkur was injured in the process of scoring Stranraer’s third and any chance of Stenhousemuir getting back into the tie was killed off early in the second half. Former Warrior Tommy Muir scored from the penalty spot when Broque Watson was fouled.

1. If goals are what you are after then head to Stair Park. There has not been a goalless game in the league since October 19, 2019. On that occasion, Dumbarton were the visitors but neither team could find a way past either Max Currie or former Blue Conor Brennan.

2. On a similar note, the last Stranraer contest with Stenhousemuir to end in a goalless draw at Stair Park was back in April 1996.

3. Ex-Stranraer man Tom Orr was named the cinch League 2 Player of the Month for January after scoring five goals last month. That included doubles against Elgin City and Albion Rovers and he has taken his tally to 14 in all competitions. That’s three more than he managed for Stranraer last season.

4. Orr is not the only former Stranraer man in the Stenhousemuir squad. Goalkeeper Ryan Marshall featured 18 times for the Blues and Ross Lyon had a loan spell at Stair Park from Rangers in 2018. Lyon made 13 appearances and scored twice. Both came at Stair Park, with the only goal against Alloa and then the second goal in a 2-0 win over Forfar Athletic. The Stranraer team against Forfar was: Currie, Robertson, Neill, McGowan, Hamill, Hawkshaw, Agnew, Anderson (Scott 79), Okoh (Dykes 89), Turner, Lyon (Gray 85). The unused substitute on the day was trialist/goalkeeping coach Eric Phillips.

5. Michael Mullen’s strike last weekend at Elgin City was the first time Michael Mullen had been the name of a Stranraer goalscorer since January 24, 2009. Mullen Snr scored alongside Stephen McConalogue in an 8-2 thumping from Stirling Albion.

We are pleased to confirm that Saturday’s contest will be broadcast via our Stranraer FC LIVE streaming service.