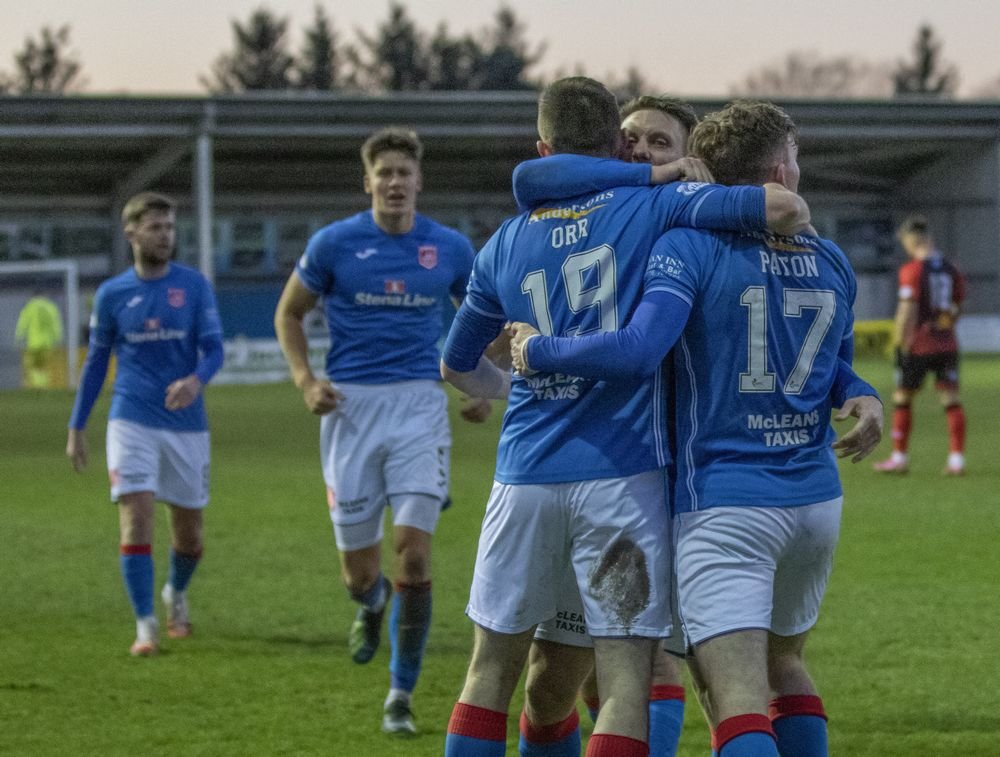 Second half strikes from Tom Orr and Ruari Paton saw Stranraer move up to third in the league, on a day when no other League Two fixture was completed.

The all Dumfries and Galloway contest beat the weather, with the two sides meeting for the third time this campaign.

The two previous encounters had both finished 1-1 but Stranraer would gain the upper hand on this occasion.

Stevie Farrell made just one change from the team that was victorious against Spartans, with Grant Gallagher in for the injured Jamie Hamill.

Annan came into the game with the poorer recent form but seized the initiative early on, with Scott Robertson doing well to cut out a dangerous low cross from former Blue Max Wright.

Iain Anderson fired a volley into the ground, which was an easy take for Greg Fleming, before Stranraer started to pull the game back in their favour.

Robertson stole possession deep in the Annan half with the ball breaking kindly to Orr.

He managed to find a pocket of space and get his shot away but it flew just the wrong side of the post.

At the other end, Owen Moxon, a goalscorer in those two previous encounters at Galabank, almost scored a spectacular opener.

He brought down an attempted clearance and then hit a looping volley which had Fleming beaten but was again off target.

Stranraer were finding their rhythm as the half wore on, with Adam Cummins twice denied before the break and an Andy Stirling corner causing goalkeeper Alex Mitchell issues in his own six yard box.

After an even first half, it was Stranraer who set the tempo after the break.

Stirling, who was in impressive form against Spartans the previous weekend, was again creating chances and he cut open the defence to find Orr, who fired at Mitchell, with the offside flag already up.

Then, Annan managed to survive an almighty scramble in the box before Mitchell again denied Orr.

This time, Ayrton Sonkur’s long ball found the striker, who took advantage of a Steven Swinglehurst slip to get his shot away.

It would be third time lucky for Orr though, with the game’s defining moment coming on 64 minutes.

Darryl Duffy was the provider for his strike partner and Orr smashed beyond Mitchell at his near post.

Annan’s task was made harder eight minutes later when they found themselves down to 10 men as Moxon appeared to catch Duffy with an elbow in front of the referee.

Kevin Graham was quick to produce the red card and any chance of a comeback was effectively killed off 13 minutes from time.

An off the ball incident involving Sonkur and Swinglehurst saw the referee point to the penalty spot and Paton stepped up to beat Mitchell and wrap up the win.

Next for Stranraer is a trip to Kelty Hearts on Scottish Cup business.