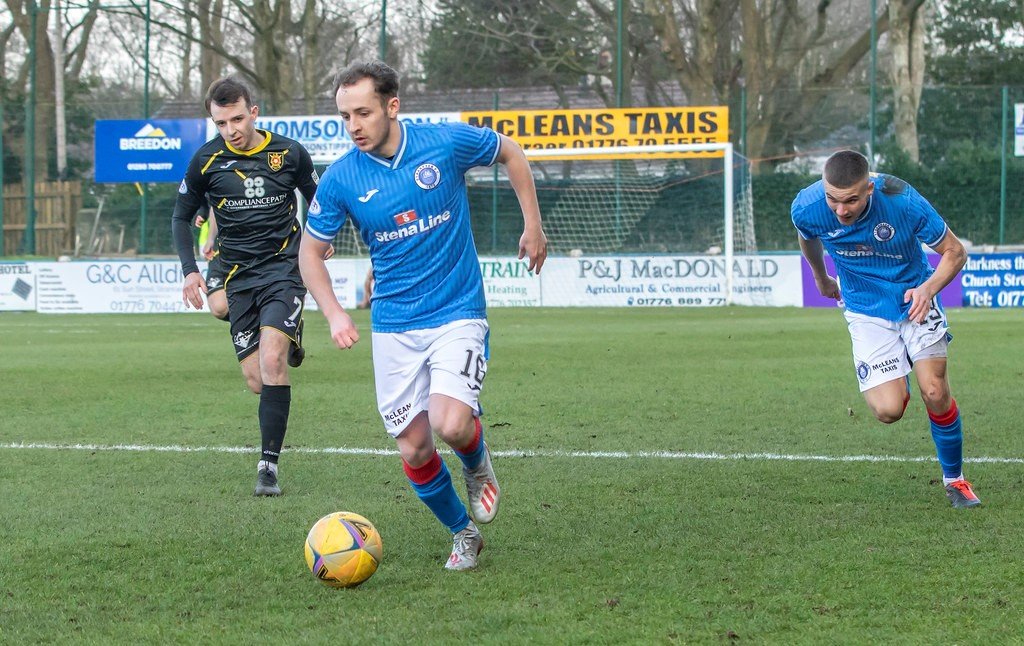 Debutant Salim Kouider-Aissa stepped off the bench to fire Stranraer to all three points against Albion Rovers.

Both teams had cancelled each other out for much of the second half but a tempting cross from Matty Grant and a clever finish from the substitute was enough to give the home side the victory.

The striker, signed on Friday, was named on the bench as Jamie Hamill largely kept faith with the team that had ended Dumbarton’s unbeaten start to the league.

The one change was enforced with Dylan Forrest suspended and Sean McIntosh making a welcome return.

Buoyed by the victory over the Sons and their impressive home record this campaign, Stranraer came flying out of the blocks.

Only 75 seconds were on the clock when many in Stair Park thought the hosts should have had a penalty.

Paul Woods burst into the box and appeared to be pushed in the back by Blair Malcolm but referee Chris Fordyce waved played on.

The referee’s decision just four minutes later was much more to the liking of the Stranraer fans as Woods went down under a challenge from Albion Rovers goalkeeper Chris Smith.

Woods picked himself up for the spot kick but Smith redeemed himself in getting down low to make the save.

The visitors were having to weather the storm and James Hilton and Woods combined for another chance just after the quarter hour mark.

Hilton nipped in between Smith and retreating defender Luke Graham but was forced wide and laid the ball back to Woods, whose shot was deflected wide for a corner.

All that early pressure but there was no breakthrough for Hamill’s men, who then found themselves a goal down.

A switch of play from Michael Paton saw Charlie Reilly outpace Luke Watt before smashing home via the underside of the crossbar from the edge of the box.

It could have been a real blow for the Blues but they immediately got back on level terms.

Hilton was again involved, playing a lovely through ball to Scott Robertson, who swept home from inside the box.

The player/coach could even have put his side in front just before the half time whistle.

This time Grant was the provider with a ball over the top which put Robertson through on goal.

Smith would win this round of the duel between the two as he stuck out a foot to block a goalbound effort.

There had been plenty of chances in the first half but the second 45 minutes would prove a much cagier affair.

Brian Reid’s men saw much more of the ball after the break but the defence and George O’Connor kept clear cut chances to a minimum.

At the other end, Craig Ross looped a header over the crossbar from Grant’s delivery but it was looking increasingly likely that the third goal of the game would prove decisive.

It would come the way of the home team with 12 minutes to play as Grant whipped a teasing ball into the box.

Substitute Kouider-Aissa timed his run to the near post perfectly and fired the ball beyond Smith to wrap up three points.

Stranraer were not at their best in the second half but, ultimately, got the job done and secured another vital win.