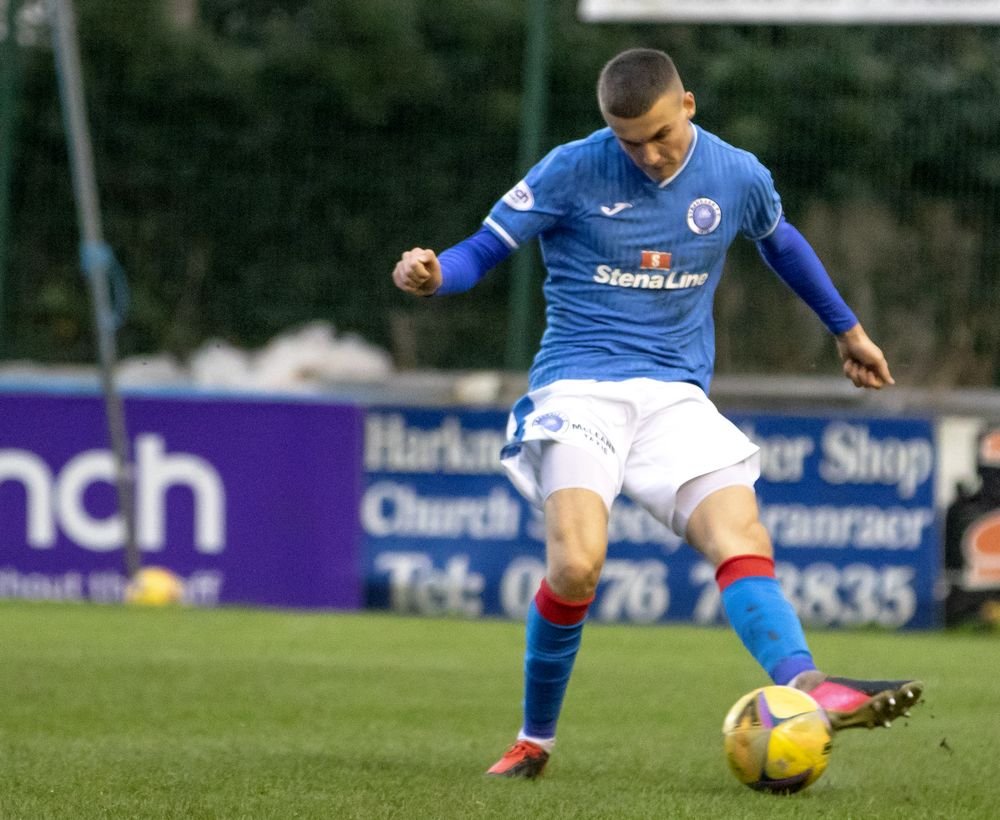 ‘EVERY day is a school day’ and that could not be more accurate for Sam Ellis.

The defender is enjoying his first taste of senior football with Stranraer after joining on loan from St Mirren.

On top of that, he has teamed up with a few folk he knows from the playground – Josh Walker and Ross Smith.

The full-back said: “Before I came into my first session, I had plenty of boys who I already knew.

“I literally grew up with Ross and Josh more or less.

“I’ve known them and played against them plenty of times as well with St Mirren and Kilmarnock.

“There were not many strangers when I came in.

“It is massive when you know people at the club.

“I was training for a few weeks at Alloa and I did not know anyone.

“You needed to introduce yourself to everybody and it is quite hard to fully be yourself almost when no-one really knows you.”

Ellis has had to be patient in his quest to enjoy his first taste of first team football.

The 18-year-old has been sidelined by the form of Sean Burns for much of his time since joining the Blues.

A one-minute cameo appearance against Edinburgh City on September 11 was finally followed by a first start against Darvel in the Scottish Cup as Burns moved infield.

Ellis, who has been with the Buddies since he was just six years old, said: “I’ve been used to youth football my full career so far.

“I’ve come here and made my professional debut.

“The aim is to get as much football as I can this year and see where it takes me next year.”

Burns, who also began his career with St Mirren, was sent off against Annan Athletic at the beginning of last month.

Ellis came on for former schoolmate Walker on that occasion and has slotted in at left back in the absence of Burns for the games against Edinburgh City and Elgin City in recent weeks.

Now, he is hoping to convince manager Jamie Hamill to keep him in the team for Stenhousemuir this weekend, despite 30-year-old Burns being back from suspension.

Ellis said: “Sean is definitely helpful in training and everything.

“We get on brilliantly.

“Of course, I’ll be hoping I’ve done enough to convince the manager to keep me in the team.

“I get on great with Sean but, obviously, when you go out on loan your main priority is to play football.

“Fingers crossed I have done enough in recent weeks to give the gaffer at least a headache.”

That only told half the story though as the home side also missed two penalties during the 90 minutes. Broque Watson saw his spot kick saved by the legs of David Wilson before Matty Yates got on the end of a deflected shot to squeeze the ball home from a tight angle.

Former Stranraer man Tom Orr then struck the crossbar before Stranraer had a goal chopped off after it hit Paul Woods on the line. Yates was then brought down with Wilson again preventing Stranraer from scoring from the spot.

Finally, the Blues put the game to bed when Watson scored his first for the club after firing home in the second half.

Queen of the South preview