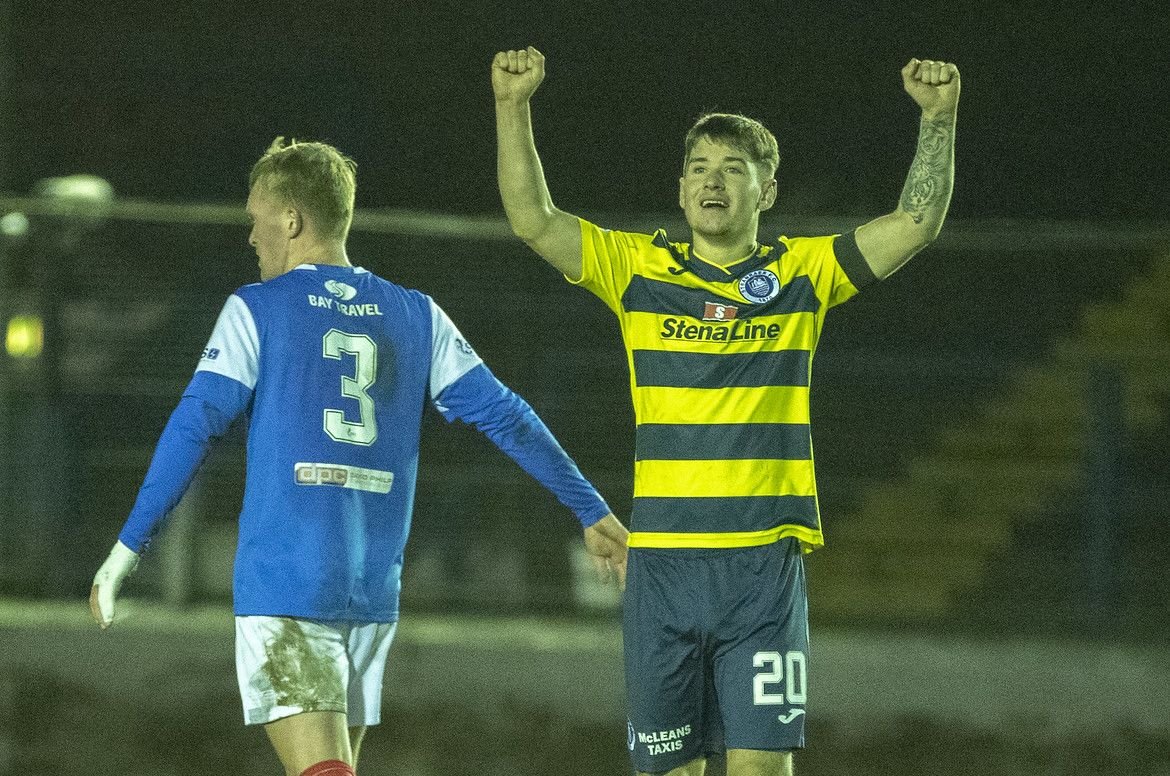 Matchwinner Matty Yates is hoping he has convinced Jamie Hamill to keep him in the team after finding himself on the bench.

The frontman has featured in all bar one of Stranraer’s 27 games this season, with 23 of those appearances coming from the start.

However, he was named among the substitutes for the club’s last home game against Stirling Albion.

Stepping off the bench, he netted a penalty deep into injury time to rescue a point in a thrilling 3-3 draw.

Seven days later he was on target again from the spot to secure a 1-0 win over Cowdenbeath and make it four points from a possible six.

Yates said: “Jamie spoke to me and said that in the last couple of games I’ve not really been up to my standards.

“I just had to come on the park and show him what I can do and that’s what I did.

“I knew myself that I was not playing as good as I could.

“I just had to take it in and do what I did when I came on and it got me a start against Cowdenbeath.

“When the gaffer said that I was going on at half time I just wanted to give my all for the team and that’s what I did.”

The trip to Central Park came after a difficult week for the Blues.

Club chairman Shaun Niven tragically died at the beginning of the week, with a minute’s silence held before the kick-off in Fife.

Yates described the loss as “devastating news” and said: “He would want us to get on with it anyway.

“To get into training and train well for the game on Saturday.

“We did and we got the three points for him, which we were delighted about.”

Saturday offers an immediate return to Fife as the Blues head to the New Central Park home of Kelty Hearts for the second time this season.

The SPFL newcomers look to be heading for back-to-back promotions after progressing from the Scottish Lowland Football League last year.

Yates was keen to cause an upset though and become the first team to win at Kelty since Dundee United on the opening day of the season.

“They have been doing well this season, especially when they put out the Scottish Cup holders St Johnstone.

“It is going to be a tough game but the last time we went up there we got beat 1-0 but we gave them a good game.

“Hopefully, we can take the Cowdenbeath win into that game and hopefully try to get something out of it.”

Two goals just before half time ended Stranraer’s chances of making it four wins in a row.

It was the visitors who opened the scoring when Sean Burns sliced a corner into his own net. Then, three minutes from the interval, Jordan Forster nodded home from inside the box.

The game was effectively over when Nathan Austin scored from close range and the frontman then rounded Jack Baker after the break to wrap up the win.

1. Each of the three meetings between the clubs has taken place at a different ground – Stark’s Park, New Central Park and Stair Park.

2. Striker Nathan Austin has scored in each of the three previous meetings.

3. Stranraer are yet to score a league goal against Kelty Hearts. All three strikes – courtesy of Thomas Orr, Scott Robertson and Ruari Paton – came in the Scottish Cup clash at the beginning of 2021.

4. Stranraer have scored penalties in consecutive games for the first time since March 2018. On that occasion, Scott Agnew netted against Queen’s Park in a 3-2 defeat at Stair Park and repeated the trick seven days later when he scored the winner at Arbroath in a 3-2 victory. The Blues had trailed 2-0 at half time but fought back to win. The team on the day was: Currie, Robertson, Neill, McGowan, Hamill, MacPherson, Woods (Gray 79), Agnew, Anderson, Lyon (Hawkshaw 70), Dykes (Okoh 62). Not used: Barron and McLaren.

5. Kelty Hearts lost to Elgin City on Tuesday evening but they have not lost back-to-back league games since joining the Scottish Professional Football League (SPFL). The midweek game was also the first time they have failed to score in the league.