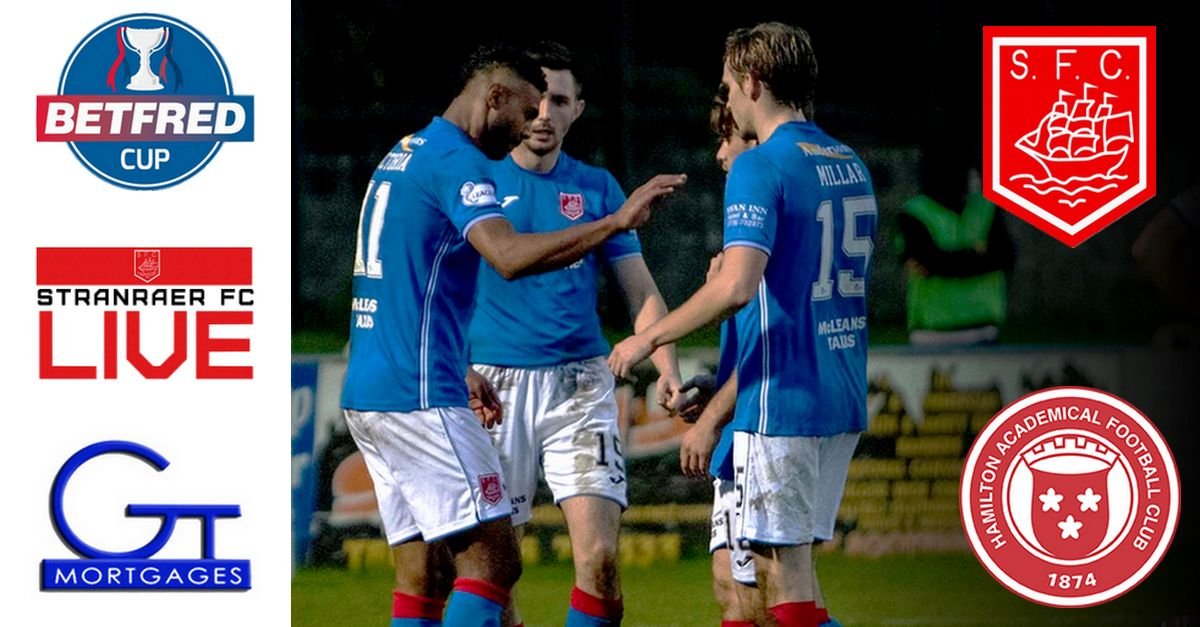 Stranraer go into Wednesday night’s cup clash believing they can cause an upset, according to boss Stevie Farrell.

Top flight Hamilton Academical are the visitors to Stair Park but Farrell is hopeful his side can spring a surprise and pick up a result.

The Blues have a history of upsetting Premiership teams in the competition and defeated Motherwell on penalties in July 2018, with Isaac Layne finding the target.

Pressure and expectation is on the visitors once again and Farrell was hopeful Stranraer could build on their first win of the season.

He said: “I think the team that is in the division above or divisions above, the pressure is always on them.

“We’ve been there ourselves in recent times.

“When you are the team in the higher division, the pressure is always on you because there is an expectation on you to go and deal with the game and to go and win the game.

“That just is what it is for any team in a higher division.

“We know that is the case on Wednesday night – even after Hamilton’s result on Sunday [an 8-0 defeat to Rangers].

“People may look at that and think Hamilton will come as a wounded animal and be more of a danger to us on Wednesday.

“There are not many people – outwith Stranraer and the bubble of Stranraer – expecting Stranraer to cause Hamilton any problems but we have got to believe.

“We are playing reasonably well and have been in recent weeks.

“We are buoyed by the result on Saturday so we can go and enjoy the game on Wednesday night and look forward to it.”

The Blues go into the game boosted by a 2-0 victory over Cowdenbeath on Saturday afternoon.

Thomas Orr scored in the first half with Joao Victoria finding the target in the closing stages.

The Stranraer boss said: “It is an important win.

“We’ve put ourselves back in the pack and it was a good win and well-deserved win.

“I’m delighted for the boys.”

Orr had previously had a goal chopped off for offside but the striker would not be denied and he slotted home after good link up play with Andy Stirling.

The manager was pleased to see the frontman, who joined the Blues in the summer, get his first goal for the club.

Farrell said: “We had to work with Thomas for a wee while.

“He reminded me a bit of Innes Cameron when we first brought him to the club.

“You could see – and it is no disrespect – that he had not played in the SPFL for a couple of years.

“He came to see me a few weeks ago and I told him that he was nearly there.

“I think you’ve seen in the past couple of weeks what we are working on with Thomas.”

Looking ahead to tomorrow, Farrell’s squad is boosted by the return of Grant Gallagher, who has completed his two-match suspension.

Cameron Elliott and Tom Devitt both remain on the sidelines, but could return later this month.

IT IS almost 15 years since Stranraer and Hamilton last locked horns and that came in March 2006.

It was a season that was to end in frustration for the Blues, who, come the end of the campaign, would be relegated. Hamilton would finish third and picked up all three points thanks to Brian Wake’s second half strike.

Stranraer would also finish the game with 10 men when Leigh Hinds (pictured) was sent off at the very end.

It was a Hamilton team that featured a couple of faces who would become more familiar to Stranraer fans. Scott Agnew started the game and was replaced by future Stranraer trialist Scott Anson. Going off at the same time as Agnew was Paddy Keogh, who featured for the Blues in 2007.

You need to go all the way back to the beginning of August 2009 for the last time Willie Collum took charge of a Stranraer game.

That saw Dundee run out 5-0 winners at Dens Park when Sean Higgins, Gary Harkins, Colin Cameron, Colin McMenamin and Leigh Griffiths found the net. David Mitchell was also sent off that day and, with all three subs having been made, Danny Mitchell kept a clean sheet for the final six minutes.

Mr Collum is no stranger to Hamilton Academical fans though and has taken charge of two games involving them this campaign. The latest came at the end of August when Rangers visited New Douglas Park. Then, Ianis Hagi and James Tavernier gave the Ibrox side all three points.

On the road, Mr Collum took charge of Hamilton’s trip to Celtic Park at the beginning of the same month. There, the hosts ran out 5-1 winners with an Odsonne Edouard hat-trick, as well as strikes from Jeremie Frimpong and Patryk Klimala. A Christopher Julien own goal was the reply for the visitors.

We are pleased to confirm that Wednesday night’s League Cup tie will be available via Stranraer FC LIVE, priced at £8.

Home and away fans can order your one-game pass by clicking the following link, or typing it into your smart TV browser:

If you’re a Stranraer FC LIVE season subscriber, please note that cup games are not included in your plan – you’ll need to buy a one game pass to watch.

We hope you enjoy the match.