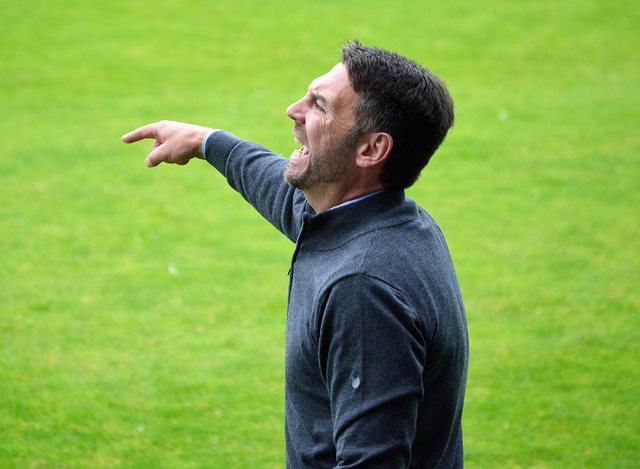 DISCUSSIONS are continuing in a bid to see Ryan Stevenson and Andy Stirling return to Stair Park.

Stevie Farrell is keen to see both men line up for Stranraer next season as part of his new squad in League Two.

Already, 12 players have agreed to sign up for the coming campaign and Farrell was keen to add Stevenson and Stirling to that number.

He said: “Ryan Stevenson, I’ve had a very, very good chat with.

“Ryan will not sign with anybody but Stranraer and I categorically can state that.

“Myself and Ryan are very close off the pitch and I’ve had good positive chats with Ryan.

“I’m confident that Ryan will be fine and will be with Stranraer moving forward.

“Andy Stirling has had a bit of interest from other higher league clubs – but nothing concrete – which you would expect given his pedigree.

“We have made an offer to Andy and we are having good discussions with him.

“I am still hopeful that Andy might be a Stranraer player come the start of the season.”

The defensive trio of Jamie Hamill, Adam Cummins and Scott Robertson have already agreed to extend their stay at the club.

Joining them will be Connor McManus, Cameron Elliott and James Hilton, as well as Grant Gallagher.

Midfielder Gallagher missed all of last season due to a serious knee injury and Farrell praised his determination to get back playing football.

He said: “If I could ask for one thing this year, I want everybody at Stranraer – management, fellow players, fans, press, committee – to get behind this lad.

“This lad, more than anybody I know in football, deserves a slice of luck.

“He deserves a slice of good fortune.

“His attitude for what he has battled back from; most players would have chucked it by now.

“This guy has been working alone.

“You come through one injury working alone it is hard enough but to come through multiple injuries, serious injuries, and to continue to work alone, mentally that takes some strong human being.

“That is why I want Grant Gallagher in my team.

“He is not only a first class footballer but he is a top class character.”

One man who will not be part of the Stair Park squad is Lee Hamilton.

The central defender joined the Blues from Stirling Albion 12 months ago and was a regular at the heart of the Stranraer defence.

However, a serious injury just before Christmas ended the 24-year-old’s season prematurely.

Farrell thanked Hamilton, who made 19 appearances for the club, for his efforts and wished him well.

The Stranraer boss also revealed Lewis McIntyre, who made four appearances, including coming off the bench at Ibrox, would be part of the first team squad.

He may not be the only member of the South of Scotland squad to make the step up.

Farrell said he had been in discussions with the management team of the reserves squad and there would be “an open door” in terms of who they felt would benefit from training with the first team.

Stranraer have not played a game since the midweek defeat to Montrose in March due to the coronavirus.

Since then, Farrell has been able to sit down and “analyse everything”.

He said: “I analysed a team that last season won two games of [league] football.

“We cannot run away from that, it is a fact.

“It is a disappointing fact but it is what it is.

“Then, I’ve got to look further than that and I am looking at a team that in League One were unbeaten in 50 per cent of our games last year.

“We drew with clubs like Falkirk, Raith Rovers, Airdrie, Clyde and then you look and say ‘do I rip this up and start again from scratch or based on that fact and based on all the facts, have we got a core of nine or ten League One players that can go into League Two and give us a right good start to our squad?’

“That is the way I am looking at it.