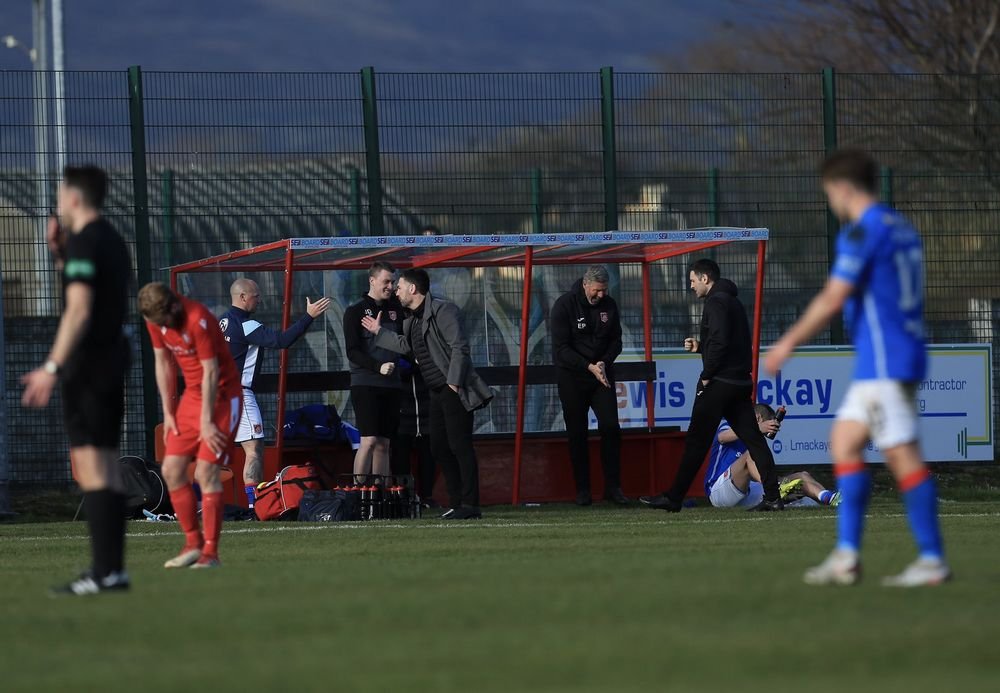 Stevie Farrell believes a fighting spirit is fast becoming part of Stranraer’s DNA after watching them battle through against Brora Rangers.

The Blues will make a long journey north again on Tuesday night when they face Elgin City in league business after the Scottish Cup success.

Kieran Millar will miss out through suspension and Lewis McIntyre is again absent through a back injury but Josh Walker returns to the squad for the first time since November.

Farrell’s men had trailed 1-0 at Brora but finished strongly with goals from James Hilton, Matty Yates and Tom Orr.

The manager said: “It is a trait that we have had and has been in our DNA this year.

“We have done very well coming from behind in games and taking something from games, winning games and drawing games.

“It is something that I will always have.

“I would take that every time and it is certainly something we have got in this group of players, which is pleasing.”

The three goals at Dudgeon Park took the club’s tally to almost 40 for the season.

The front trio of Orr (9), Ruari Paton (8) and Darryl Duffy (7) lead the way but assists from Grant Gallagher and Millar at the weekend mean only three outfield players – Walker, McIntyre and Ally Taylor – have not scored or provided an assist this season.

Farrell said: “When we put the squad together this year, you always look at what you can do better.

“It’s not about what you have got but what you can do better, where you can improve, and we knew that we needed to get goals and assists in our team and players that were able to do that for us and to share the load.

“I think that is Thomas Orr nearly in double figures.

“You have got Ruari Paton, you’ve got Darryl Duffy, Andy Stirling with a few, Ayrton Sonkur with a few, James Hilton – we are scoring goals from various areas of the pitch.

“That is something that is pleasing but it is not only the goals.

“The goals are getting created from all over the pitch.

“Grant Gallagher, right back on Saturday, delivered for Matty Yates’ goal and it is good and shows we are playing in the right areas of the pitch.”

The manager spoke to the club website while en route to Palmerston Park to see Queen of the South take on Hibs.

Having won 3-1, the Edinburgh side will be heading to Stair Park later this month, with a spot in the quarter-finals of the Scottish Cup at stake.

He said: “It was the right thing to do and the opportunity to watch both teams.”

A rude awakening for Stranraer in their first game of the League Two season.

The Blues had drawn the opening two games of the Betfred Cup but were thumped 4-1 by Elgin on the opening day of the league campaign.

Russell Dingwall opened the scoring with the only goal of the first half. However, Elgin would quickly double their advantage after the restart when Kane Hester scored and former Blue Conor O’Keefe put the game to bed on 65 minutes.

Tom Devitt managed to pull one back but Stranraer’s misery was complete when Kieran Millar was sent off in conceding a penalty, which Dingwall scored.

The last contest involving referee Peter Stuart and Stranraer was the final game of last season.

Mr Stuart was the man in the middle when Montrose won 1-0 at Stair Park thanks to Russell McLean’s goal on 77 minutes.

For an away tie, fans need to cast their minds back to September 2019 and a trip to the Penny Cars Stadium. The Blues enjoyed an impressive start to the game, with Jordan Allan and James Hilton giving them a 2-0 lead at the break. Callum Smith pulled one back but the real turning point came when David Dangana was controversially sent off. Paul McKay then levelled things in stoppage time to ensure the spoils were shared.

Mr Stuart took charge of Elgin’s contest with Edinburgh City on Halloween last year. The capital clash ended in a 1-0 victory for the home side, with Gabby McGill finding the net.

The referee’s last trip to Borough Briggs came back in November 2017 when Berwick Rangers made the long journey north. Elgin ran out comfortable winners on that occasion with Bruce Anderson scoring a double, with Darryl McHardie, Brian Cameron and Declan Byrne all on target for the hosts. Gary Phillips found the net for the now Lowland League side.

You can watch Tuesday night’s match via the home club’s streaming service.