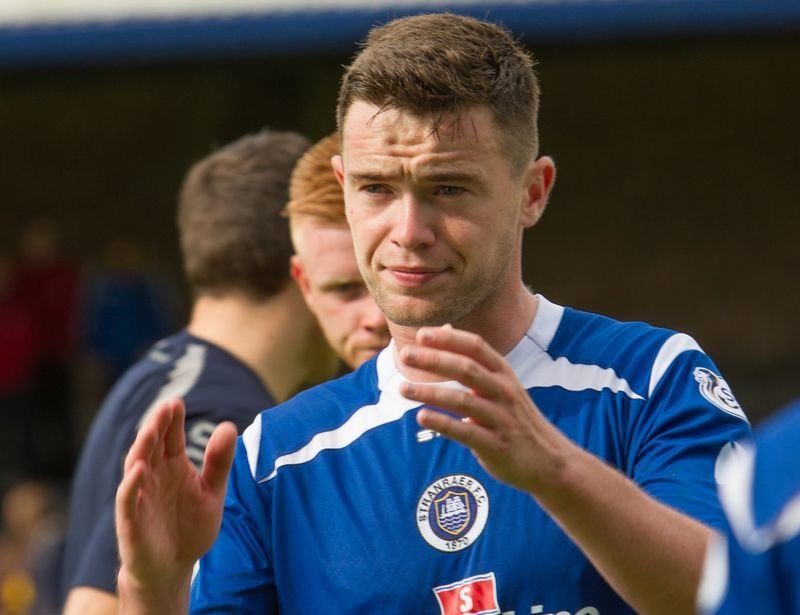 IT HAS been a long road to recovery for Grant Gallagher but, fingers crossed, the end appears to be in sight.

The midfielder returned to Stranraer in the summer but is yet to kick a ball due to a serious knee injury in pre-season.

Positively, the Stair Park favourite returned to training earlier this month and, although it is unlikely he will play again this season, he is determined to get back to full fitness and return to action.

He said: “For myself, I am back to running – very minimal.

“So, what we were doing two weeks ago was we started off with 30 seconds of jogging and four minutes of walking.

“Last week, it was a minute and 30 seconds jogging and three minutes of walking.

“We are just trying to build it as the weeks go on.

“It is a wee bit daunting because I actually feel as if I could go on and do a wee bit more running but we are building it up and not overdoing it.”

Gallagher’s last competitive game was for Airdrie against Arbroath towards the end of February last year.

He returned to the Blues, where he played more than 200 games during his first spell with the club, looking to add some grit and determination to the Stranraer midfield.

The 29-year-old took part in pre-season but it was there that he suffered a setback, with pain in his right knee.

The former Celtic youngster said: “It was my ACL (anterior cruciate ligament), the cruciate in my knee.

“Basically, it was an injury resulting from last season and what it was when I started pre-season the injury was worse than what we first thought.

“The surgeon was saying there was just a slight tear in the ligament, which was enough to result in it needing operated on.

“There was just a real instability of my knee at the start of the season.

“At the start, myself and the physio were working towards me returning to play.

“If you remember, when we were in the Betfred Cup, I felt I was not far away from returning.

“I returned to training and it was just as simple as a shooting drill and I joined back in.

“I hit a shot and really excruciating pain went up the back of my knee.

“I collapsed to the ground and I knew straight away, then and there, that something was not right.

“Obviously, I then had to take action to get the surgeon involved and see what the real problem was.”

The long road to recovery was one that Gallagher knew all too well having suffered a similar injury while with Dumbarton.

There, he suffered a complete rupture of the ligament.

However, whether ruptured or slightly torn, the route back is the same, with an operation and a lengthy rehab.

Much of the season has been spent in the gym with physio Jamie Donnachie.

Gallagher, who can still be regularly spotted in the stand at Stair Park cheering on his team-mates, said: “I think Jamie is quite surprised by how much I know when it comes to this sort of injury.

“She is talking about the muscles and I am giving her answers back – something she would not really expect from a football player.

“I have bought right into it because I just want to get away from it.

“I had gone through a long period of my career where I never picked up niggles.

“I was always able to get through games, even if it was just the slightest thing, but in terms of these injuries it is not something you can carry on through.

“I have had to have surgery and go through the right recovery from it.”

Gallagher has already started working with the football as he edges ever closer to full fitness.

Clearly, the midfielder, the coaching staff and all involved with Stranraer would love to see Gallagher back in contention for Stevie Farrell’s team this season.

Unfortunately, it looks like time may be against the ex-Airdrie man.

He said: “We looked at the plan and we think I am just out of time to return this season, especially because the season ends pretty quick now.

“Maybe if it was a few years ago and the season continued on a wee bit I could have made a bit of it.

“So, you don’t really want to head back straight into it and you pick up another injury just because you forced yourself back.

“Probably, the sensible idea is for me to keep working through the summer and be ready for next season.”