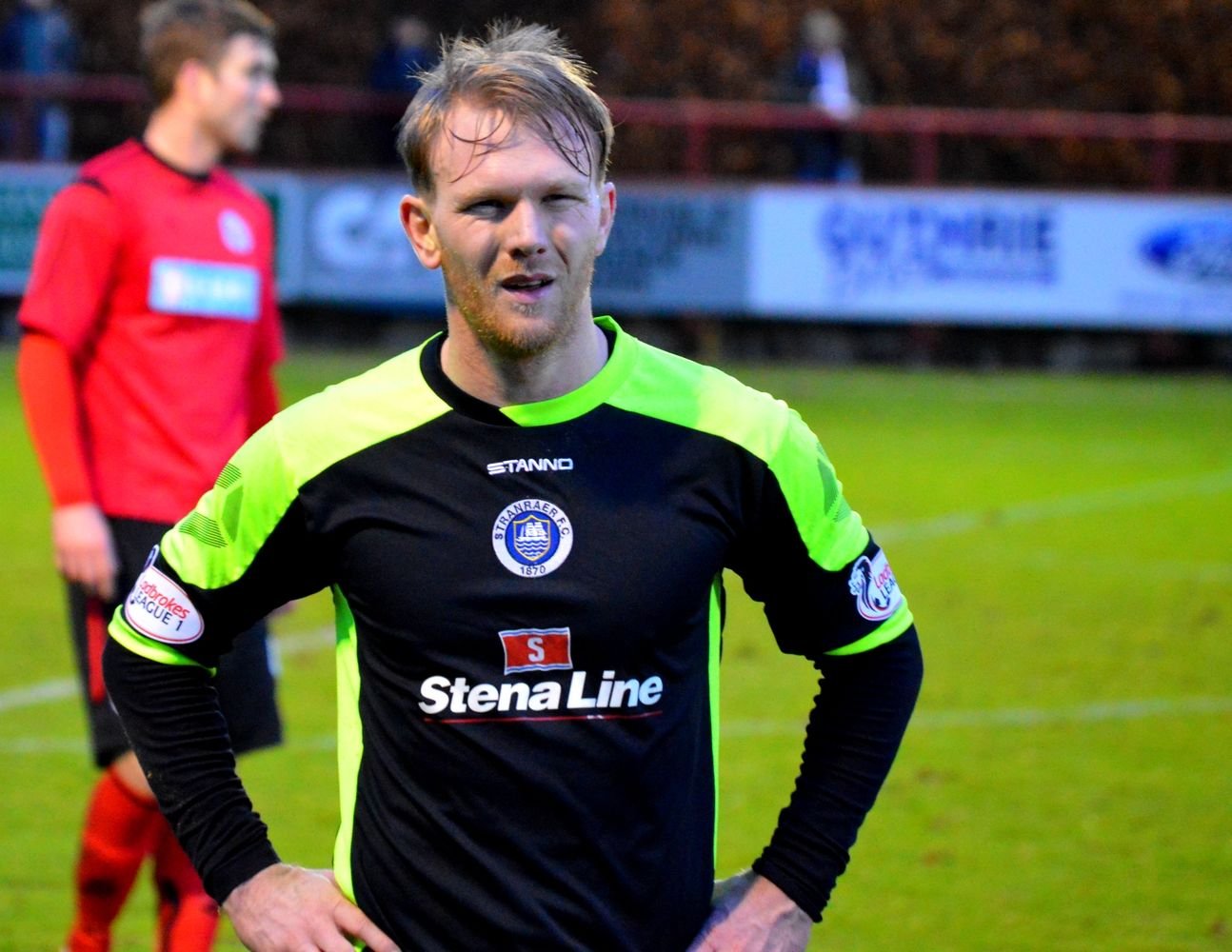 SCOTT Agnew had played almost 100 games before he joined Stranraer but he feels the move kick-started his career.

The midfielder had already lined up for Hamilton, Alloa and Ayr before Keith Knox brought him to Stair Park.

Very quickly, Agnew settled in and equally as quickly caught the attention of fans with a wand of a left foot, which not only scored goals but also provided plenty of assists.

“I think it started a wee spell for me.

“It stems from belief.

“I was 21 years of age but I had not played much first team football.

“I always say this to boys now ‘go somewhere that you feel as if you are valued and going to progress’ and I think I did that and it kick-started my career.

“I will always be grateful for that opportunity and those six months to go and play.”

Of course, if you are going to announce yourself as a Stranraer player you should do it in memorable circumstances.

Stranraer travelled to Links Park for the first game of 2010 – and their first game in more than a month.

Goals from debutant Armand One and also Michael Moore in the first seven minutes indicated an easy win for the visitors.

However, John Maitland and Alan Campbell ensured the scores were level at the break before a Paul Tosh double had the Angus side on top.

One pulled one back with 14 minutes to play before Agnew and Romuald Bouadji gave Stranraer a 4-5 win.

Agnew said: “I remember my debut for the club.

“I scored and I think we won 5-4 away to Montrose.

“I remember thinking ‘oh my God, what have I done?!’

“It was like a game of basketball – backwards and forwards – but I think I scored a good goal and thoroughly enjoyed it.

“It was a good game and we came out on top.

“To be honest, I cannot think of many games like that.

“There have been a couple of high-scoring draws or maybe a 4-3 but it was a great game.

“I had not been playing at Ayr and I needed to get out and play.

“I thoroughly enjoyed it and Keith Knox was the manager and was amazing for me.

“He literally let me go play and he gave me that belief back.

“I started to believe in myself again and had probably lost that at Ayr a bit.

“I had been in and out of the team for the past six months so it gave me belief.

“After 90 minutes, I was ready to go and managed to kick on again from there.”

As mentioned, Agnew would scored six goals in his 20 games on loan at Stair Park and never finished on the losing side when he scored.

Understandably, that form caught the eye of others but the former Rangers youngster told the club website he was “desperate” to join on a permanent basis and had made his mind up within “three or four games”.

He added: “I was really enjoying my football and I think I was only 21, maybe 22, and at times Keith Knox made me the captain.

“I think he knew how to get the best out of me and I felt like I had boys like Michael Moore and other older lads round about me, who really believed in me.

“I was taking that onto the pitch and it was then when I fell back in love with football again and started enjoying it.

“I think that showed within my performances.

“It was always going to be the case that I would join and I knew that after three or four games.”

The impressive form continued after Agnew had signed permanently.

Double figures in terms of goals from midfield, plus plenty of assists in setting up One and Craig Malcolm, ensured he was named in the country’s team of the year for Division Three.

He was also one of four players shortlisted for the Player of The Year – alongside One.

He said: “It was goals galore.

“I think we were all into 14 or 15 goals and big Armand I think got 20 odd; we scored some amount of goals.

“It was a dream for me because I was taking all the set pieces.

“Armand was not the smallest of targets so it meant generally if I put it in a good area that he was making something of it.

“It was a great time.

“I really enjoyed playing with Malky, I had a great relationship with Michael Moore and still speak to them on a regular basis.

“It was a great time to be involved in.”

However, the club’s failure to achieve promotion – finishing fifth and missing out on the play-offs – meant Agnew’s first spell at the club was tinged with disappointment.

Instead, he would move on to Dumbarton, where he made nearly 150 appearances before a spell at St Mirren.

Then, Agnew made the decision to return to Stair Park, where he would clock up another season of double figures in front of goal.

He said: “I have always kept in touch with Iain Dougan, the chairman.

“He keeps in touch and he likes to give me a bit of stick now and again via text messages.

“If I have scored a couple of goals, I tend to remind him that that was the case.

“He used to try to slag me and tell me that I only scored goals in training so when I got my 100th career goal last season I sent him a wee picture as a nice wee reminder.

“When I left St Mirren, I had Championship options but I wanted to go to Stranraer, to be honest.

“I loved my first time there and I just had a real good relationship with the club.

“I had agreed the deal quite early and I was not going back on my word, even when other clubs were contacting me.

“I had no hesitations about coming back, none at all.

“Obviously, the manager had changed but nothing at the club had changed.

“When I first went back, I don’t think myself and the manager, Brian Reid… I did not get off to the flying start that I think we hoped I would do.

“Obviously, Brian ended up losing his job at Christmas time and Stevie Farrell came in.

“I think we probably started to see a bit better from me when Stevie came in and I had another good spell.”

Three goals in his first season back was followed by more than a dozen the following campaign.

Agnew said: “I think it would be fair to say my second spell was a mixed bag, purely because my first spell was so useful in terms of goals and appearances and the relationship.

“I think it was a mixed bag.

“Initially it was not great but I think I finished strongly.

“I think when I left the following summer it was not through the relationship with the manager or anything like that.

“I probably needed a change and my contract was up at the time so I decided to move on.

“Obviously, I’ve moved on to East Fife now and I have started to really enjoy it again.

“It has been a good decision so far.”

Agnew’s impressive form has continued since moving on from Stranraer for the second time as he has become a key component in Methil.

Twenty goals have come from midfield and the 32-year-old is yet to finish on the losing side for the Fifers when they have played Stranraer.

He said: “I think there are similarities between my first spell at Stranraer and just now at East Fife.

“It comes back to – and every footballer will tell you this – if a manager trusts you.

“You know you are going to be playing and you have got the ability to go and excel.

“If you have got good players, you just need to treat them properly and they will do well.

“I was pleased with my form this season and I hope to get going again – whenever that may be.”

The latest choice for the team said: “It is brilliant.

“I have been very vocal throughout my career of the support they gave me in my first spell when I went there was a 21-year-old.

“I have got a great relationship with everyone there.

“I’m open about how fortunate I was to have a great time there and it is something I look back on with great memories.”

Agnew also became a dad for the first time earlier this year, with the birth of his son, Arthur.

Lockdown and coronavirus restrictions have had their benefits for the family.

He added: “I’ve been enjoying it.

“To be honest, it is the most challenging thing I have ever done in my life.

“I’m not embarrassed to say that and it has been a tough three or four weeks but he is absolutely amazing.

“He has been brilliant and obviously I have got a lot of time to spend with him because we are in lockdown.

“I feel quite lucky that I am getting to see him every day because usually I would be rushing about preparing for pre-season and things like that.

“I feel fortunate and very lucky.

“It has been a great wee period.”