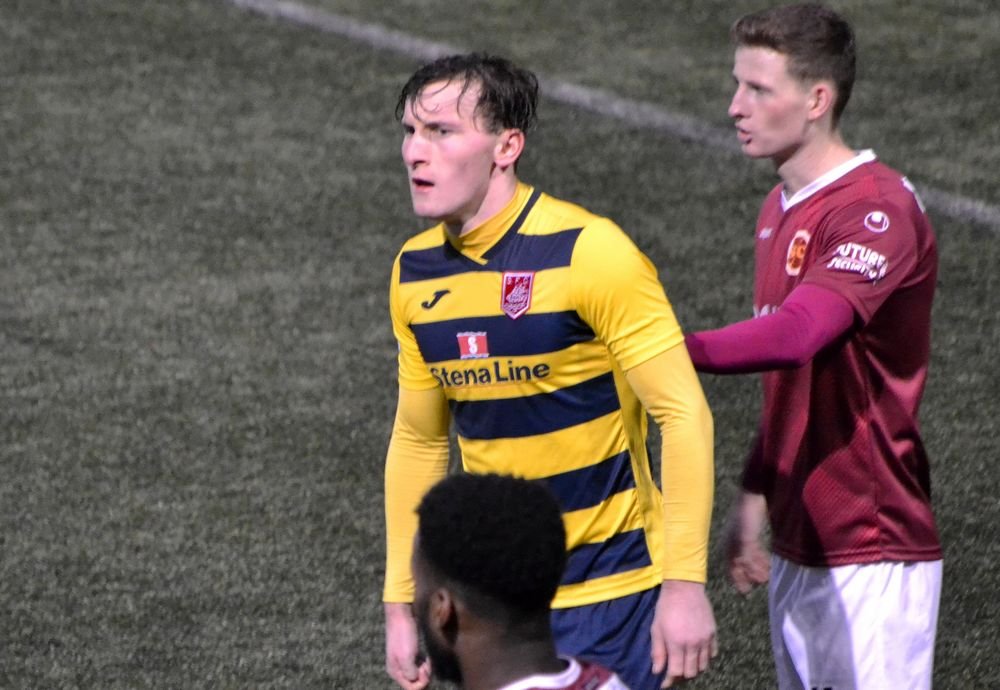 Stranraer let victory slip away at Ochilview, as 10-man Stenhousemuir struck late to claim a point.

The Blues had a comfortable half time lead after Adam Cummins’ close range effort and Ruari Paton’s spot kick.

But second half goals from Botti Biabi and Cammy Graham either side of Callum Tapping’s sending off saw the Warriors take a share of the spoils.

Stevie Farrell was able to include fit-again Cameron Elliott on the bench in an otherwise unchanged Blues side.

Having won on their last outing against Brechin City, Stenny made a confident start to the contest.

Josh Grigor and Ryan Blair both tried their luck in the early going, before former Blues striker Mark McGuigan squandered an opportunity to put the hosts in front.

Stranraer had half chances of their own with Thomas Orr and Joao Victoria looking lively.

And as in previous weeks, the Blues would take the lead.

Cummins was first to react to a loose ball from Paton’s free kick, and prodded the ball past on-loan Hibernian goalkeeper Paddy Martin.

Seeking an immediate response, Stenny had claims for a penalty after the ball struck Paton’s arm, but referee Dan McFarlane was unmoved by the home side’s appeals.

Instead, Stranraer would be awarded a spot kick of their own at the other end, after Stenhousemuir defender Andy Munro was adjudged to have brought down Orr.

Up stepped Paton, who converted the resulting penalty with power and confidence.

Not to be written off, Stenhousemuir looked a more determined side as they emerged for the second half.

Grigor fired an early warning shot, testing Greg Fleming with a swerving strike from 25 yards which the Blues goalkeeper parried away to safety.

Stranraer would suffer a setback on the hour mark, as captain Grant Gallagher had to leave the field with a suspected groin injury.

And just one minute later, the Warriors would pull a goal back.

With Paton dispossessed out wide and claiming for a foul, Stenny broke forward through Greig Spence.

The experienced frontman combined with Tapping and Biabi, before clattering the frame of the goal with a curling strike from just inside the box.

Unfortunately for Stranraer, the ball rolled into the path of former Swansea City prospect Biabi, who was alert to the rebound and managed to find the net.

But just as soon as they had pulled a goal back, Stenny were down to ten men.

A two-footed lunge from Tapping on McManus, followed by a petulant kick at Kieran Millar, saw the midfielder receive his marching orders.

The Warriors were living up to their nickname in the second half, and a physical challenge from Munro on Orr saw Stranraer awarded a free kick.

Substitute Jamie Hamill took the set piece quickly, allowing Paton to twist and turn his way into the box, but the Blues forward saw his shot blocked.

Scott Robertson headed over as Stranraer increased the pressure with a series of corners.

And in-form striker Darryl Duffy tried his luck with a spectacular 40 yard half volley, but could only find the advertising boards behind the goal.

The home side were showing plenty of fight, with Creag Little next to be booked for a body check on Paton, and Paddy Martin producing a good stop to deny the Irishman his second goal of the afternoon.

Stranraer would have one more chance to put the game to bed.

A flurry of stepovers from sub Andy Stirling carved out an opportunity for Orr, but he was unable to meet the winger’s delivery on the stretch.

Just when it looked like the Blues would hold on for a narrow victory, Stenny produced a late suckerpunch.

Jayden Fairley’s header looped over the Stranraer defence, and youngster Cammy Graham capitalised on some indecision at the back to pounce and jab the ball home, sparking celebrations in the home dugout.

With too little time for either team to find a winner, it was a point apiece, as Stevie Farrell expressed his disappointment at not taking all three from a good position.

Next up for Stranraer is a clash with Albion Rovers – the first of three back to back home games.