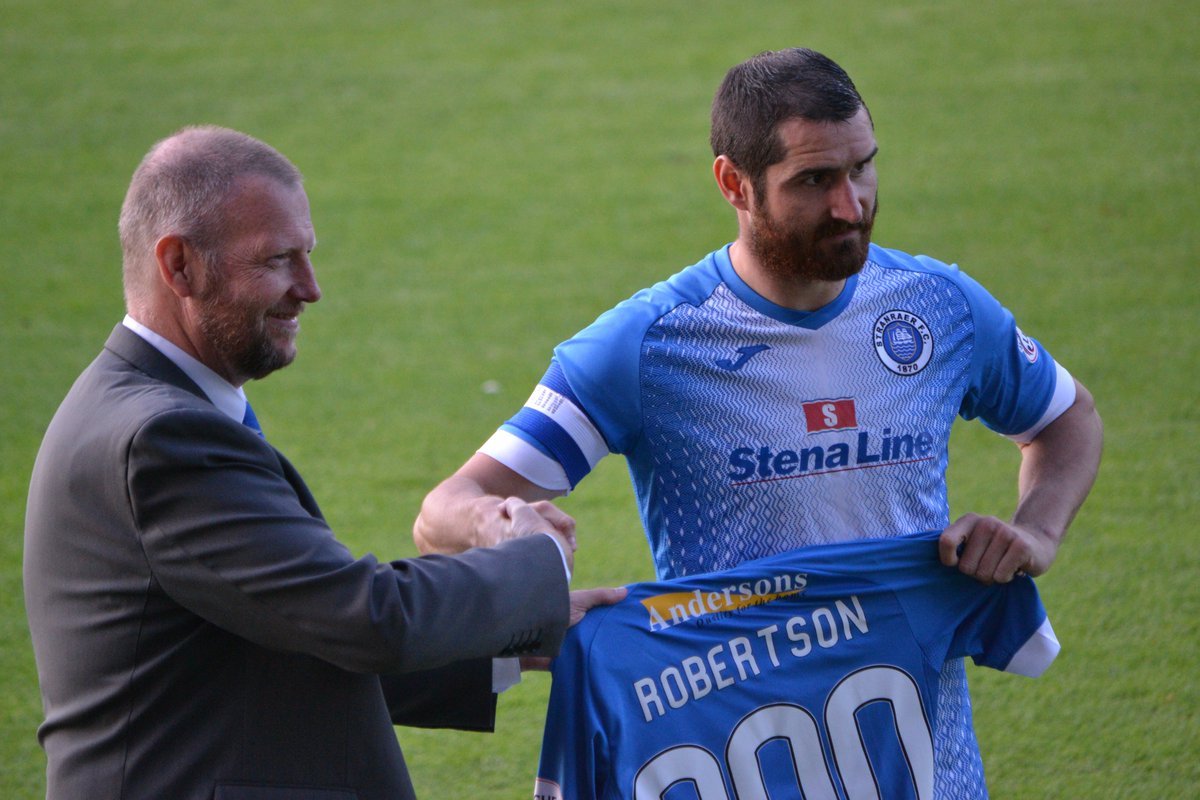 His appearance on Saturday at Ochilview Park means Scott Robertson is in prestigious company.

The fans’ favourite made his 300th appearance over two spells with Stranraer and is already looking to the future.

We decided to test the first team coach on how well he knows his time at the club, and also those he has played alongside.

1. Who did you make your debut for Stranraer against?

Oh God, I don’t know. Who would it have been? It must have been a league game and Rangers were in the league that year. We played them in the second game at home. Was it Brechin? I scored in that game as well.

First game was against Dumbarton, where Stranraer won 4-2, with goals from Sean Winter, Martin Grehan and a double from Chris Aitken.

2. You’ve scored 13 goals for Stranraer and they have come against 10 teams. How many of the teams can you name?

Brechin, Queen’s Park was the last one, East Fife, Peterhead… Albion Rovers. That makes seven goals and Stenhousemuir makes eight, I’ve scored twice which makes nine. That is a hard one. I cannot even think of half my goals. I’m trying to think of the actual goals to see if it brings back who it was against. I don’t think I’ve scored against Cowdenbeath. I don’t know if I am going to get any more. Airdrie, I scored a header against Airdrie.

It was a neutral venue? I’ve no idea.

The two clubs missing are Ayr…

That was a good header as well.

3. How many seasons have you spent at the club?

4. Who did you make your second debut against?

I don’t think I’m going to get this one. Was it in the group stage of the cup? Who could it possibly have been? Clyde?

It was Falkirk, at Falkirk.

5. How many managers have you played under at Stranraer?

It would be Ginge (Stevie Aitken), Reidy (Brian Reid), Faz (Stevie Farrell) and Hammy (Jamie Hamill). There would be four plus Chris Aitken for Aberdeen in the Scottish Cup.

6. I began my career at Ayr United. I have played for Stranraer, Dundee, Falkirk, Clyde and Hibs and I am now with Partick Thistle. Who am I?

He moved to Dundee from Stranraer? It’s Mitch, David Mitchell.

7. I have played in France, England, Cyprus, Thailand and Scotland. I have scored against Arsenal and scored on my debut for Stranraer. Who am I?

8. Two players in the current Stranraer squad have scored more goals than yourself for the club. Who are they?

Jinky and Duff… Jinky and Malky by about 100!

9. I played more than 85 games for Stranraer after joining for Wrexham. Earlier in my career, I replaced my brother for my only appearance for that club. Who am I?

10. One of your current team-mates played against Panathinaikos and in the next game that he played he scored against Ayr United?

Somebody that is my team-mate now? Played against Pan​athinaikos and is a team-mate now? In an actual game, rather than a friendly? Oh my God, I cannot think who that could possibly be.

As a bonus, here’s a full list of the various players who have lined up alongside Robertson in those 300 games – see how many you can remember!