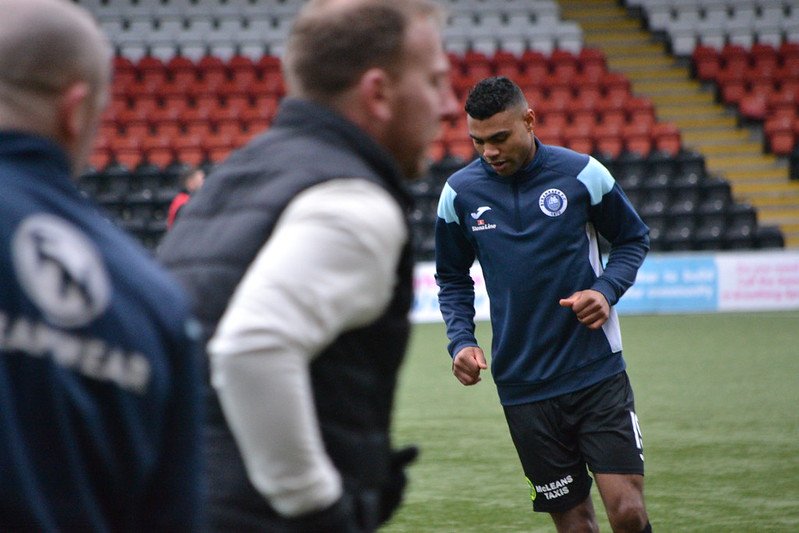 THERE was wind, rain and tricky conditions under foot last Saturday afternoon but one player definitely had a smile on his face at full time.

Joao Victoria made his second home debut at the weekend against Falkirk after joining Stranraer on loan for the second time.

An important part of Stevie Farrell’s squad in the second half of last season, he has again made the temporary switch to Stair Park as the Blues once again look to fight off the threat of relegation.

Victoria played the full 90 minutes against high-flying Falkirk as Ryan Thomson’s second half goal ensured the hosts made it four games unbeaten in the league.

Speaking about rejoining the club, he said: “I was happy to hear from Stranraer.

“Stevie Farrell contacted me to see how I was and to see how things were.

“He had seen that I had not been playing and obviously asked a few questions to see if I was happy going on loan again.

“I think he had contacted John McGlynn first and then he contacted me.

“John would not just let me go so I had to ask him if there was a chance for me to go and he said that he would look at it.”

The Portuguese frontman ran himself into the ground for his first full game since, strangely, Stranraer beat Raith Rovers in Kirkcaldy back in April.

He told the club website it was “very tiring” but added it was worth it in the end.

Victoria said: “It’s really good to be back.

“I obviously feel the love from the club.

“It is really good to be back.”

Farrell was keen to bring Victoria to the club permanently last summer after he impressed in 15-game loan spell from Airdrie between the end of January and April last season.

However, the temptation of a move to Kirkcaldy ultimately proved too strong and Stranraer had to look elsewhere.

But the football world works in a curious way and Farrell and Victoria were to be reunited at the end of January once again.

Victoria said his new manager gave him a freedom to play and express himself.

He added: “It is much easier to settle in when you know the manager and the club.

“You know who you are dealing with.

“Stevie knows how I play and he knows my strengths and stuff like that.

“Obviously, he gives me that belief and confidence that I think I needed because I was not playing and Stevie knows me.

“He always gives me that push and that is what I need from now until the end of the season.”