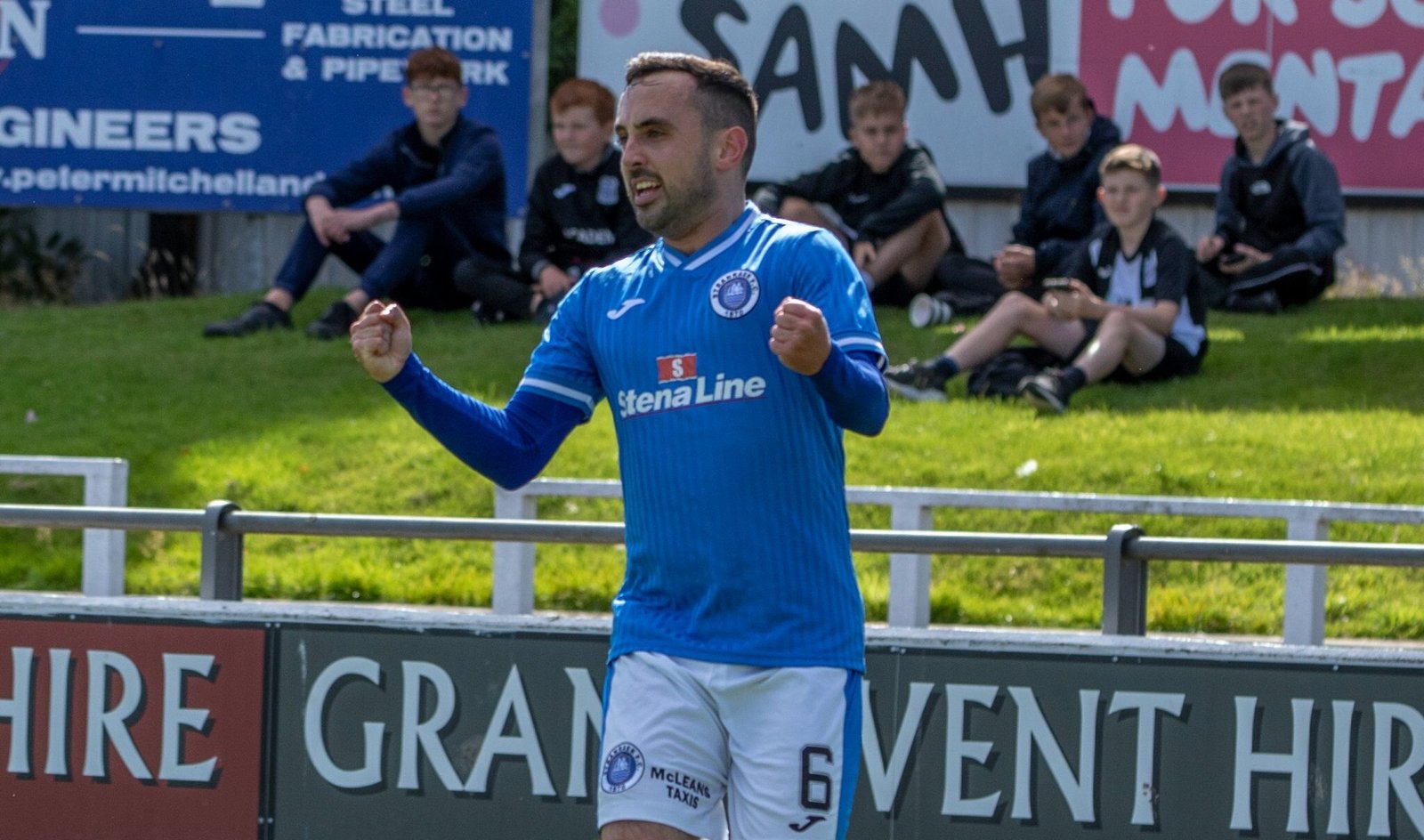 The role of underdogs will suit Stranraer just fine, according to Anton Brady.

League One FC Edinburgh go into tomorrow’s game as favourites due to being a league above the Blues and playing with home advantage.

However, it is not a new feeling for Stranraer, with few tipping the club to be up challenging at the top of League Two.

Brady said: “You think everybody will be looking at Stenhousemuir, Dumbarton and Bonnyrigg Rose – a lot of people tipped them to do well.

“We will just, hopefully, take things week by week and hopefully we can pick up wins or at worst draws.

“We will look to keep ourselves up there.

“I think the league looks pretty close so far as well.

“I think there are only five or six points between the bottom and the top.

“I imagine everybody will look at FC Edinburgh being the favourites as well.

“We will just go and try to play the way we have been playing through the first four league games and hopefully we can get a win from the game.”

Jamie Hamill’s side come into the contest in the capital on the back of consecutive 2-2 draws.

Firstly, at home, they shared the spoils with Bonnyrigg Rose as Brady provided an assist for the opening goal.

Then, the former Queen’s Park man opened the scoring at Borough Briggs on Saturday – despite some claiming it was Dylan Forrest with his first for the club.

Brady set the record straight and laughed: “My goal.

“The boys were winding me up on the bus on the way home saying it was Dylan but it was definitely me.”

Despite the same scoreline and the same outcome of a point at Stair Park and Borough Briggs, the manner of the result demonstrated the different feeling at full time for Stranraer.

On the long trip north, Stranraer had led 1-0 only to trail at the break and then fight back to secure a point.

The two draws, along with an opening day win over Annan Athletic and a defeat to Forfar Athletic, mean Stranraer sit in fifth place, on five points and just outside the play-off spots.

Brady said: “Obviously, the first week we had a good win and then we were disappointing up at Forfar.

“It was not good enough and we did not do ourselves justice that day.

“Bonnyrigg was disappointing because you are hoping to hold on for three points and Saturday it is away from home, it is a tough place to go and all the circumstances so probably three of the four game we are happy with.

“The Forfar game was obviously disappointing.”

FC Edinburgh won three out of the four encounters with Stranraer last season but it was the Blues who won on the last trip to the capital.

Grant Gallagher had already struck the crossbar before the visitors opened the scoring. Craig Ross rose unmarked to nod home a Paul Woods cross and they doubled their advantage through another defender.

Sean Burns was perhaps not known for his goalscoring during his time with the club but he scored his first in a 3-0 win over Cowdenbeath and notched his second six days later with a cool finish at Ainslie Park.

Anthony MacDonald pulled one back after a ball over the Stranraer defence but the promotion-chasing side could not find a leveller.

1. Stranraer actually have a better record in the capital than at Stair Park when it comes to facing FC Edinburgh. Twice they won at Ainslie Park, compared to a single win in Wigtownshire.

2. Every meeting between Stranraer and FC Edinburgh has had goals. There is yet to be a 0-0 draw between the two sides.

3. Stranraer picked up a decent point away to Elgin City on Saturday. The club’s last win away from home came on the penultimate day of last season when Stranraer won 3-1 at Stenhousemuir. Craig Ross scored the only goal of the first half before former Edinburgh man James Hilton scored a double. Adam Brown pulled one back before goalkeeper Peter Urminsky was sent off and Hilton clipped the post with a free-kick.

4. Hilton moved back to Stranraer earlier this year and FC Edinburgh will feature two players who moved the other way. Lee Hamilton played against Falkirk at the weekend while Mark Docherty was an unused substitute. Docherty played 43 games for Stranraer with his last appearance the 3-0 defeat to Dunfermline Athletic in the second leg of the promotion play-offs. The Stranraer team at East End Park was: Mitchell, Robertson (S Stirling 74), Docherty, Rumsby, McGregor, Bell, Gallagher, A Stirling, Winter, Grehan (McKenna 46), Longworth (Forde 83). Not used: Kinnaird and Fahey.

5. Ex-Blue Ryan Stevenson celebrates his 38th birthday tomorrow (Wednesday). The former Hearts and Raith Rovers man made nine appearances for the Blues before having a short spell with Albion Rovers. The frontman scored twice – in draws with Raith Rovers and Forfar Athletic – and is now manager of Glenafton Athletic.

Admission at the new Meadowbank Stadium is just £5.

You can pay at the gate, with contactless card payment available.

The home side have not announced any live coverage for Wednesday evening’s cup tie.