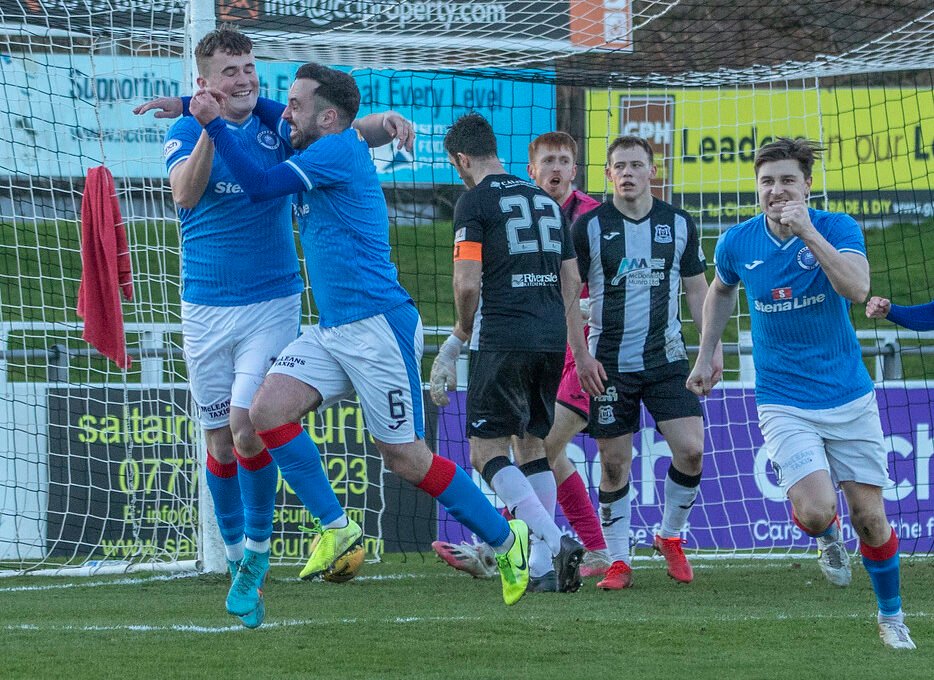 A penalty from Matty Yates and a first senior goal for substitute Michael Mullen saw Stranraer pick up an important win at a bright and breezy Borough Briggs.

Elgin skipper Darryl McHardy’s late goal made for an edgy finish, with seven minutes of stoppage time added, but the Blues held on to record an important win.

Stranraer manager Jamie Hamill had a few problems to resolve before the match, with keeper Jack Baker unavailable due to family commitments, Tommy Muir suspended, Ayrton Sonkur injured a week prior and James Hilton also missing after taking a knock at training on Thursday.

As a result, Sean Burns joined Craig Ross in the centre of defence, Sean McIntosh returned at right back, Anton Brady and Dean Hawkshaw came into midfield with Paul Woods dropping to the bench, as Daryll Duffy joined Matty Yates up front.

The first real chance fell to Scott Robertson after five minutes. A controlled build up and cross by the Blues spelt danger for the home side, and the ball fell for Robertson eight yards out, but his first-time effort sailed over.

The breakthrough came on 10 minutes, as another good build up found Yates in the Elgin box.

The striker couldn’t get the ball under control but after a failed clearance, Yates was on to the loose ball in a flash, only to be floored by Ross Draper.

The referee pointed immediately to the spot, and the youngster made no mistake, blasting high down the centre of the goal past Thomas McHale.

An Evan Towler free kick into the box gave McHardy the chance to reply with a headed equaliser, but though he met it well, it was comfortably saved low down by Luke Scullion.

As half time approached, it was a familiar story for Stranraer – some great build up play, but crosses not finding a target in the box, and chances spurned.

And Elgin almost made Stranraer pay for their profligacy minutes from the break, firstly when a clearance was charged down but the resultant shot flew wide, then when another Towler free kick wasn’t dealt with and the ball was hooked off the goal line after a scramble.

Neither side made changes during the break and Elgin came out looking determined to get back on terms, with Russell Dingwall denied an early penalty claim.

The next mini-drama saw Scullion race to the left corner of his box to try and get to a long ball, but it fell outside the area and his sliding challenge only partly blocked the ball, with the Blues defence clearing the resulting cross.

Home striker Kane Hester had a largely frustrating afternoon, and his powerful drive with just over an hour played was parried by Scullion, with no-one able to capitalise on the rebound.

As play swung from end to end, once again Robertson found himself in the box with only McHale to beat, but the keeper managed to block his effort.

With the hope of adding a second goal which would settle the match, Hamill made a double substitution, replacing Hawkshaw and Duffy with Broque Watson and Michael Mullen.

Within a minute, Robertson had yet another chance but again McHale managed to block both his initial effort and the rebound at the expense of a corner.

The midfielder took a knock in that exchange and was replaced by Paul Woods, with Josh Walker replacing goalscorer Yates a few minutes later.

A Grant Gallagher piledriver was net-bound when it glanced off a defender and spilled out of play, but the Blues would add a second goal from the resulting corner.

With Elgin failing to clear their lines, Mullen pounced on the loose ball to stab home his first goal in senior football.

Stranraer were on the back foot in the closing stages and McHardy blasted home a loose ball to make it 2-1 and set up a nervy finish.

However, the Blues saw out the victory, and it was smiles all round as they headed for the dressing room with an important three points secured.