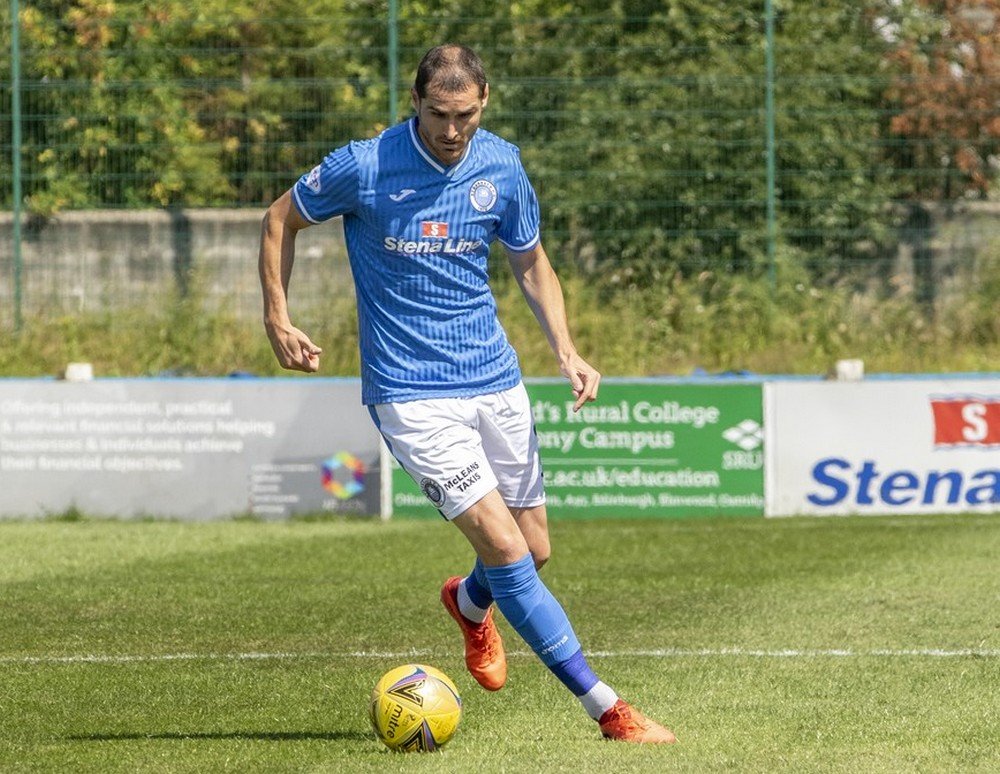 Cutting out late goals will help Stranraer to achieve their target and reach the play-offs.

The Blues have had a frustratingly regular habit of conceding late in games this campaign, which has robbed them of a number of points.

One man who is only too aware of that is player/first team coach Scott Robertson.

He said: “We just need to tighten it up a wee bit.

“I honestly don’t think we are far away and I think if you see some of the performances then you can see the amount of good performances and games we should have won.

“Purely stats based and based on the amount of goals just in the league that we have lost, it is six goals we have lost with less than three minutes to go or in injury time.

“If you look at that, we would be sitting comfortably fourth.”

In comparison, Stranraer have scored just three goals in the final three minutes of league games.

The Blues make the trip north to Elgin this weekend after another frustrating performance at Stair Park.

Danny Handling inspired Edinburgh City to all three points on a day where the hosts hit the woodwork twice and missed a number of glaring chances.

Robertson was among those denied by on-loan goalkeeper Brian Schwake.

The Stranraer man, who is edging closer to 300 appearances for the club, said: “Without wanting to sound like a broken record, I think it is another game we should have won.

“We have said that a lot this season to be fair but we have not taken our chances.

“We probably had had three or four very good chances, we’ve hit the post twice and then we’ve conceded from a set piece again.

“The second goal, we are down to 10 men, we are pushing, we are trying to get up the pitch and they have hit us on the break a wee bit.”

Jamie Hamill and his team will have to put that out of their minds as they swap Stair Park for Borough Briggs.

The two sides drew in Elgin at the beginning of the campaign with a Craig Ross strike all that separated the two teams in Wigtownshire.

March 2012 was the last time the Blues returned from Elgin with all three points but Robertson was confident they could do it again.

He said: “It will be a tough game, the same as every game in this league is, but if we play the way we can play then we’ve all said it before that we don’t fear anybody in the league.

“That’s not being disrespectful but we went to Kelty Hearts and for 45 minutes in the second half we have absolutely battered them.

“I don’t see why we should – and this is not being disrespectful or arrogant – fear anybody.

“I think we should be going and being confident and the more confident we are then hopefully the results start to turn.”

A Craig Ross goal just seconds after the break helped Stranraer to their first win in five games.

The Blues found the only goal of the game after Dean Hawkshaw’s drive had been deflected behind for a corner. Ross then got on the end of the former Kilmarnock man’s set piece and flicked the ball home at the near post.

Euan Spark missed a great chance to level but Elgin were reduced to 10 men when Kane Hester was shown a second yellow card with 23 minutes left.

1) A decade without a win in Elgin

Stranraer’s last victory at Borough Briggs was almost a decade ago in March 2012. On that occasion, Archie MacPhee had given the hosts the lead midway through the second half. However, two goals in seven minutes from Michael Moore and Stephen Stirling turned the game on its head. The Stranraer team that day was: Mitchell, Taggart (Kane 89), Belkouche, McGregor, McKeown, Aitken, Stirling, Borris (Shepherd 81), Winter, Malcolm, Grehan (Moore 46). Not used: McColm and Marshall.

There has only been one goalless draw between the two sides at Borough Briggs and that came in April 2004.

Michael Moore scored 94 goals for Stranraer and more than 10 per cent of those came against Elgin City. He scored 10 times against the Borough Briggs team, including four times in a 6-0 win at Stair Park in January 2004.

Stranraer’s last victory on 12 February came back in 2005 when Allan Jenkins scored the only goal of the game against Berwick Rangers. Stranraer would go on to be promoted that season while an on-loan Blue – Danny Fox – would go on to be capped by Scotland.

Midfielder Anton Brady turned 28 on Monday. The former Queen’s Park man joined Stranraer earlier this season from East Kilbride. So far, he has made 16 appearances and found the net once, away to Stenhousemuir.