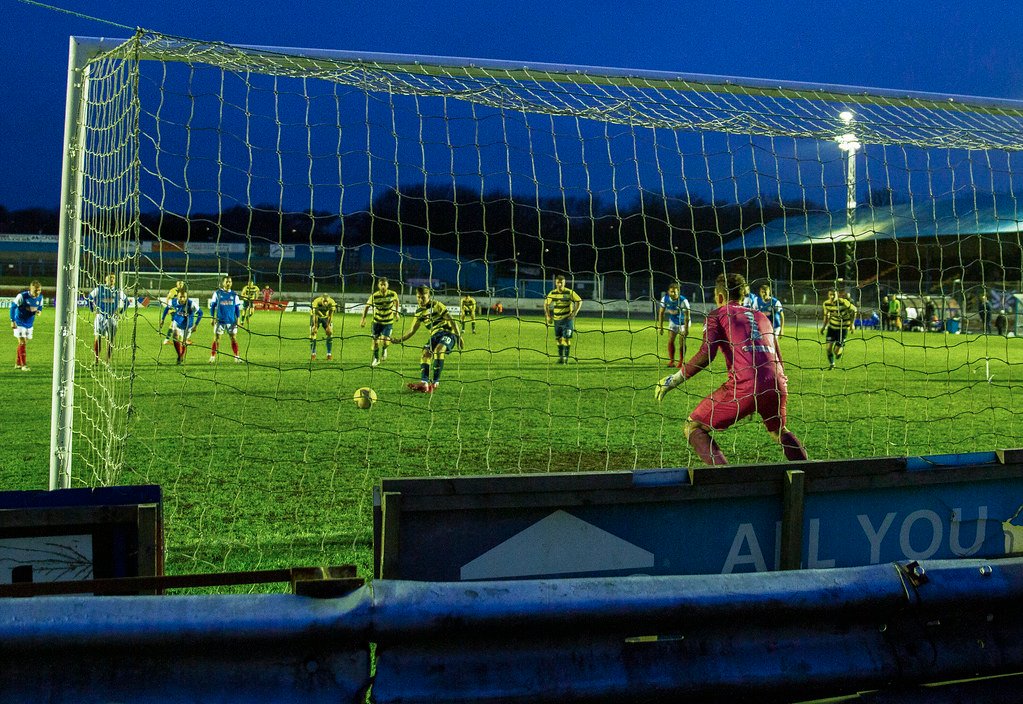 Matty Yates confidently converted an 85th minute penalty to give Stranraer a deserved three points at Cowdenbeath, but it certainly won’t go down as one of the memorable matches of this – or any other – season.

At a ground which rarely produces a decent game, the Blues consistently tried to play football and made the better chances, but a goalmouth stramash after a free kick produced the spot kick award, given after Tommy Muir was chopped down inside the six-yard box.

What happened in the previous 85 minutes was a real slog. The home side, on the back of their win at Stenhousemuir the previous week, sensed the possibility of an escape from the foot of the table, and fought their corner throughout.

An early clattering for Matty Yates by Fraser Mullen indicated intent, and referee Dan McFarlane had a word with the full back, when a booking seemed inevitable. Yates started in preference to Josh Walker – that was the only change from last week’s thriller against Stirling Albion

Minutes later, the referee was brandishing a yellow at Grant Gallagher for what seemed a fairly innocuous challenge. The resultant free kick went straight into Jack Baker’s gloves.

Minutes later, Yates beat his man on the right, ran into the box and drove a decent effort across ‘Beath keeper Cammy Gill, but just past the far post.

Gill was soon in action again, saving at the feet of Muir, who had been played in by an excellent pass from Sam Ellis.

Craig Ross was next into the referee’s book, but again, only Mr McFarlane can tell you why. Cowden’s right back Craig Thomson fanced this free kick, but fired it safely over the top.

Kyle Miller was next to see yellow for a foul on Ross, but again it seemed harsh on the player – he certainly thought so!

There was a moment of panic in the Blues defence shortly before the break when Cowdenbeath broke through and Baker saved well on the ground, but couldn’t hold on to the ball, and somehow Stranraer survived the ensuing scramble.

Halftime arrived with the deadlock intact, and for all the Blues’ efforts to construct something meaningful, it was hard to recall Gill being seriously troubled during the first 45 minutes.

The second half started exactly as the first had ended – plenty of effort from both sides in the early exchanges, but little to show for it. On 54 minutes, Yates floated in an inviting free kick, but no-one was able to get on the end of it, and a minute later, the same player took a great touch and turn, but again the shot flew over.

On the hour, Cowdenbeath’s Mullen was finally booked for another hefty challenge on Yates.

Changes seemed inevitable, and there had been plenty of interest pre-match to see two additions on the Blues’ bench. – Michael Mullen and Trialist. The latter turned out to be fans’ former favourite James ‘Jinky’ Hilton, the former being an 18 year old centre forward on loan from Kilmarnock. Mullen had been on loan at Albion Rovers until last weekend, and was involved in both games we played against Rovers so far this season.

So it was a double substitution on 65 minutes that saw both the newcomers enter the fray, Darryl Duffy and Paul Woods being the players to make way.

Scott Robertson started to push forward, and one cross was fumbled behind by Gill for a corner, and a second was deflected, but neither corner yielded a reward.

The home side made a couple of changes of their own, first of all Harvey Swann replacing Bobby Barr and a couple of minutes later, the prolific Liam Buchanan taking over from Raith Rovers loanee Quinn Coulson.

But it was Jinky who would land the telling blow. With just five minutes left, Stranraer were awarded a free kick out wide on the right. Hilton fired in a piledriver which caused total confusion, and just as Muir was about to stab it home, he was felled by a defender, and the referee awarded the spot kick.

Moments later, another Hilton cross, this time from the left, found Muir at the back post but his powerful header across goal missed by inches. Anton Brady replaced the striker for the final two minutes of normal time and the five minutes of added time, during which Cowdenbeath made frantic efforts to get back on terms, but the Blues held firm to take home a prized – and priceless – three points.

Coming in the wake of the tragic death of our much-loved and respected chairman Shaun Niven, it was just the lift that everyone connected with the club needed.