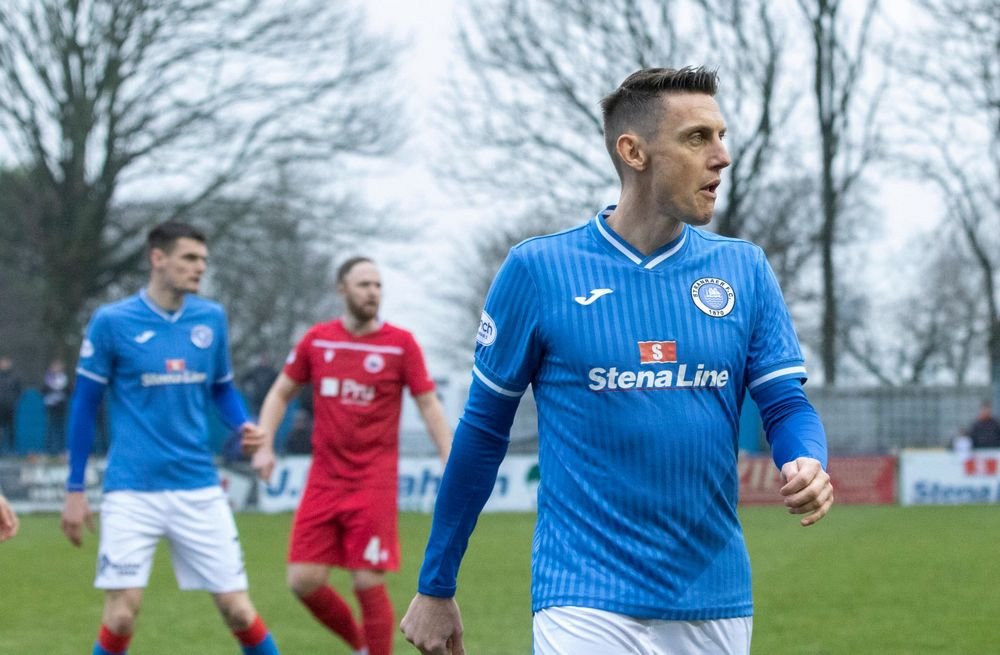 Through the week, we’ve taken a look at each of those players – in the final part, we review the strikers.

Player/assistant manager Darryl Duffy vowed he would be focusing more on the coaching side of the game but found himself brought in as Stranraer struggled for goals. Stepped off the bench against Stirling Albion before starting, scoring and coming off injured against Forfar Athletic. That wrapped up 2021 and he made his first appearance of the new year against the same opposition. Scored at home to Stirling Albion to make it two goals in two starts and then wrapped his goalscoring with an early strike against Stenhousemuir. Has not ruled out dusting the boots down for next season but again intends to focus on the off the field role.

Top scorer and top assister shows the importance of Matty Yates to Stranraer this season. The frontman was playing his first full season with the club and was the only player to reach double figures, thanks to a last game penalty against Elgin City. Also scored the first goal of the Jamie Hamill era in the victory over East Kilbride. Only scored one goal where Stranraer did not pick up at least a draw – away to Edinburgh City in a 3-1 defeat. Still a teenager, hopefully there is more to come from the former Hibs and Rangers youngster.

Up and down season saw Tommy Muir still finish as the club’s second top scorer. Injuries and illness disrupted the early part of the campaign before six goals in eight games demonstrated exactly what he is capable of. Scored against Stenhousemuir, Cowdenbeath, Albion Rovers, Forfar Athletic, Stirling Albion and Kelty Hearts between the beginning of December and the end of January. Red card against Edinburgh City interrupted the goalscoring run but he popped up to find the net at Coatbridge in the 5-0 win in April. However, his future lies away from Stair Park after just 12 months.

Homegrown frontman Josh Rennie made 16 appearances but just two of those came from the start. First of those came at former club Kilmarnock and he then stepped off the bench at Cowdenbeath to score a vital goal. That strike earned him a second start against Partick Thistle in the cup before he was again restricted to substitute appearances. Final showing came against Annan Athletic immediately after Tommy Goss scored as Rennie replaced Jamie Hamill. Went on to spend time with Hurlford and the Stranraer Reserve side before the end of the campaign.

Debut against Stirling Albion was one of just six appearances for French striker Emile Ngoy. Played the first 51 minutes 10 days later against Cowdenbeath before being replaced by goalscorer Josh Rennie. Remaining four appearances all came from the bench as Ngoy came on against Stenhousemuir, Kelty Hearts, Stirling Albion and Forfar Athletic. Final five minutes against Forfar on October 30 were his last in a Stranraer shirt and he went out on loan to Gretna 2008 for the remainder of the season.

Son of former fans’ favourite with the same name, Michael Mullen spent the first half of the season on loan at Albion Rovers. His debut for the Coatbridge side came against Stranraer at the beginning of October before he joined Stranraer in January. Stepped off the bench on 10 occasions, including against Cowdenbeath in his debut. Played the final 21 minutes away to Elgin City and found the winner when he poked home from close range. Final appearance came against Kelty Hearts in the middle of April.