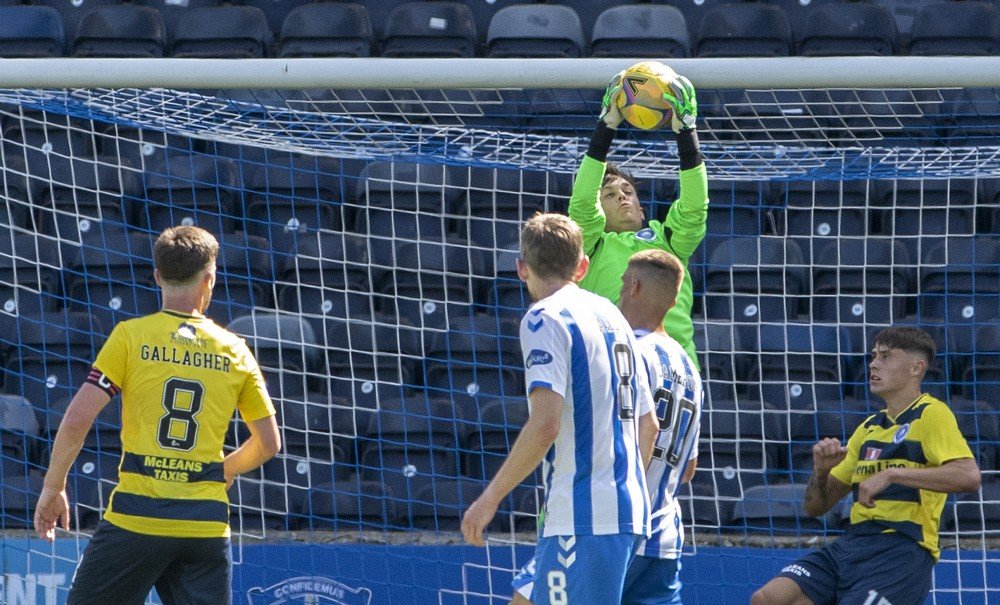 The Blues were involved in four competitions – cinch League 2, the SPFL Trophy, the Premier Sports Cup and the Scottish Cup – and a total of 30 players appeared in matchday squads for the club.

Through the week, we will take a look at each of those who were involved with the first team – starting with the goalkeepers.

Jamie Walker was one of the players to stay at the club following the change of management from Stevie Farrell to Jamie Hamill. The former Kilmarnock man looked set to be number two again this year behind Greg Fleming. Ex-Ayr man Fleming left before the season started and Walker was named on the bench for the opening game against Clyde, with Curtis Lyle between the posts. He was named on the bench for a second time when Lyle was ineligible to play against his parent club, Kilmarnock. The 20-year-old then went out on loan at Kilbirnie Ladeside, before moving on a further loan to Bonnyton Thistle, who finished bottom of the West of Scotland Football League Premier Division. Walker has since been released by the Blues.

Stranraer have had their goalkeeping issues this season with injuries, illness and absence. The Blues regularly featured just one goalkeeper in their matchday squad but opted to name Andrew Downie on the bench on five occasions. Downie first stepped on the bench on February 19 when Stenhousemuir visited Stair Park for the second time this season. He remained an unused substitute on each occasion but provided the bonus of there being a recognised goalkeeper in case the one on the pitch was forced off.

Joining on loan at the beginning of the season to fill the void left by the departing Greg Fleming, Curtis Lyle started the campaign as Stranraer’s number one. His debut came at Broadwood Stadium when a David Goodwillie penalty was the only goal of a game in which Stranraer created plenty of chances. Lyle kept his only clean sheet four days later as the Blues beat an East Kilbride side featuring four former Stranraer players – Connor Brennan, Craig Malcolm, Joao Victoria and Cameron Elliott – and one future Blue, Anton Brady. Twenty-two-year-old Lyle would play the opening three league games – a draw with Elgin City and defeats to Stirling Albion and Annan Athletic – before injury cut short his campaign and he returned to Rugby Park.

Signed from Partick Thistle, Luke Scullion was just a teenager when he made the move to Stair Park. He would go on to make his debut at Rugby Park as Curtis Lyle was unable to play against his parent club. Since then, he has been a regular between the posts and clocked up 26 appearances over the course of the season. During that time, he kept seven clean sheets, including two against Cowdenbeath, as well as against Stenhousemuir and Elgin City. The remaining three came in the 20-year-old’s three appearances against Albion Rovers as the Blues won 1-0 at Stair Park and 5-0 at Cliftonhill, with the remaining game finishing goalless.

A memorable 12 months in every way for Jack Baker. The shotstopper had effectively hung up the gloves before he got an SOS call from Darryl Duffy. Baker had missed out on the goalkeeper coach role to Billy Thomson but, with Curtis Lyle and Luke Scullion unavailable, he stepped up to play against Forfar Athletic and Cowdenbeath as a trialist. Four points out of a possible six helped ensure Baker was offered a deal until the end of the season. Those two games came more than four years after his previous games and he had never played senior football previously. Baker made a total of 10 appearances for the club and kept two clean sheets, including in his final game against Cowdenbeath.