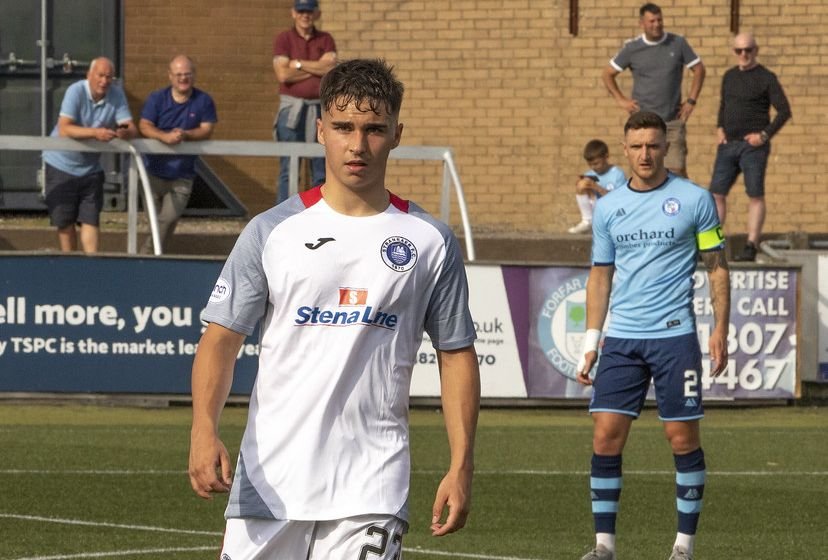 Three points would be a very welcome belated Christmas present for Ross Smith and Stranraer.

They head for Cliftonhill on Boxing Day looking to bounce back from a defeat to Kelty Hearts.

Victory for the visitors would be enough to see them finish the first half of the campaign in the play-off places.

The teenager is one of those looking to ensure the Blues avoid back-to-back defeats and instead make it one loss in five.

Smith said: “It is a massive game for us on Boxing Day up at Albion.

“I am pretty sure the boys will bounce back really quickly because we are a good team.

“We can go and beat anybody on our day so it is really important that we go and get three points.

“The aim for us is to be in the play-offs.

“We want to be up there, we want to be in the play-offs because we are capable of being in there.”

Stranraer come into the game after a disappointing result against the runaway league leaders.

Smith and Joe Moore came on at half time in the contest as the home side attempted to overturn a 3-0 deficit.

The midfielder said: “I was quite surprised the way we played on Saturday.

“On the back of three good results, I thought we were doing good.

“We were all flying coming into the game.”

Smith followed in the footsteps of a number of players when he made the temporary switch from Kilmarnock to Stranraer.

Innes Cameron and Jack Whittaker have both made the move in recent seasons while Curtis Lyle joined earlier this campaign.

Smith had already made his senior debut before making the trip down the A77 from Rugby Park.

It is no wonder that the 18-year-old has settled in well in his new changing room.

He said: “I know quite a few of the boys.

“I know Josh, Craig and Josh Walker, who were all at Kilmarnock when I was there.

“I just wanted to come down here and I knew would be comfortable coming down here because I knew a lot of the people.”

At the beginning of October, Stranraer bounced back from a defeat to Kelty Hearts with victory over Albion Rovers.

The Blues had lost 1-0 to the league leaders but reversed that scoreline when Brian Reid’s side came to Stair Park. The only goal of the came from Paul Woods, who rounded goalkeeper Cameron Binnie before firing high into the net from a tight angle.

1. Stranraer have scored in nine of their last 10 visits to Cliftonhill. The exception came in April 2017 when the home side won 3-0, thanks to goals from Paul Willis, future Blue Ryan Wallace and a Morgyn Neill own goal.

2. Paul Woods scored the only goal in the previous meeting between the sides earlier this season. He also scored once at Cliftonhill in 4-0 win in September 2017, with Scott Agnew scoring a hat-trick. Those two Woods goals account for half of his goals for Stranraer.

3. That Agnew hat-trick against Albion Rovers in September 2017 was the last time a Stranraer player scored three times in a single match. Agnew opened the scoring before netting a double from the penalty spot for his first career treble.

5. Fans were allowed into the league match between the two sides at Stair Park last season where Stranraer ran out 4-0 winners. After a goalless first half, goals came from Ruari Paton, Tom Orr, Darryl Duffy and Cameron Elliott.