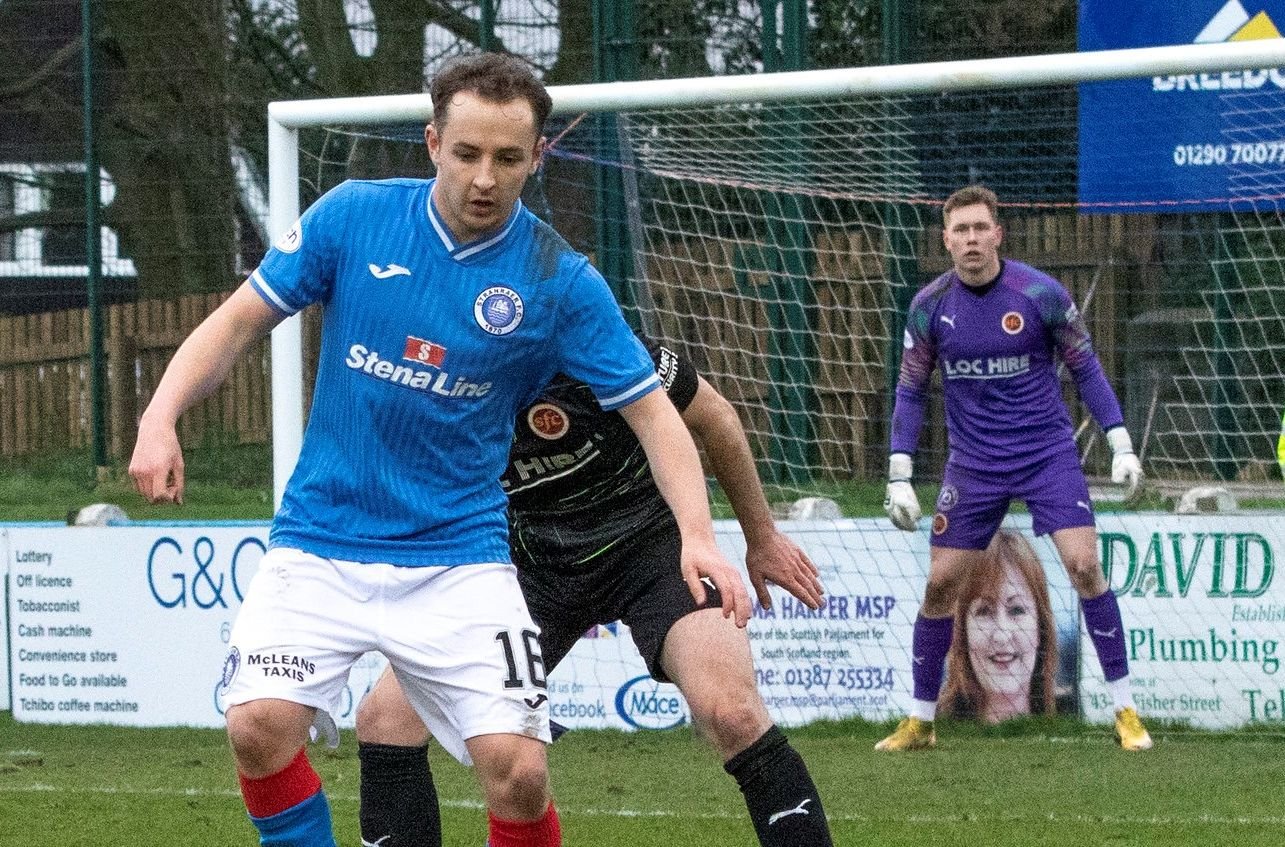 Home fans do not need to cast their minds too far back to remember a perfectly timed run into the play-offs.

Stranraer were sitting rock bottom of the League One table having just lost 2-0 to Brechin City before Christmas 2015.

However, a 5-1 victory at Ochilview on Boxing Day kick-started the Blues’ season.

At that time, they were 12 points off the play-off places but just four league defeats followed from the remaining 19 games as Stranraer surged up the table and into the top four.

Now, Dean Hawkshaw is looking for Stranraer to follow a similar pattern over the remaining 10 games and find their way into the top four.

Speaking after the 1-1 draw with Stenhousemuir last weekend, he said: “I think every game until the end of the season is a big game from now on.

“We will be looking to take maximum points from every game possible.

“We have just got to put in the performances and hope that it works for us.

“We hope to be that team and just put a run together.

“Obviously, that is two games unbeaten now but it probably should have been two wins, if we had taken our chances today.

“We have just got to try to put a run together towards the end of the season and see where it takes us.

“We went through a wee spell where we picked up three wins in a row but apart from that it has been a win here and there, dropping points where we should not have been dropping points.

“We have just got to try to put that wee run together because we have not done it yet.”

Brian Reid was the man in the home dugout back in 2015/16 and only a penalty shoot-out prevented Stranraer from promotion to the Championship.

The former Blues boss brings his Albion Rovers team to Stair Park on Saturday and they too will be looking to time their own sprint finish for the play-offs.

Stranraer could have boosted their own chances last weekend after Hawkshaw teed up player/assistant manager Darryl Duffy for the opening goal.

However, the home side failed to build on that advantage and squandered a number of chances.

Midfielder Hawkshaw, now in his second spell with the club, felt the team could learn a lot from the finishing ability of Duffy, who has more than 150 career goals.

The 24-year-old said: “Hopefully it rubs off on us.

“Darryl has scored goals all his career and we have been struggling as of late.

“Hopefully we can turn a corner and start putting balls in the back of the net.

“My chance was the best chance we have had today.

“I don’t know what has happened, I’ve probably taken my eye off the ball before I’ve hit it, and it has probably killed us today, to be honest.”

Missed chances came back to haunt Stranraer on Boxing Day in Coatbridge.

Charlie Reilly opened the scoring at the other end before Stranraer levelled from close range when Paul Woods got to a loose ball first. Muir then headed home from just a couple of yards out to put Stranraer in front at the break.

David Wilson’s free-kick was headed home by Kieran Dolan before Sam Ellis was sent off for the visitors.

Albion Rovers then secured the win when Lewis Wilson scored as the clock ticked beyond 93 minutes.

2. During that 2015/16 season, Stranraer failed to score in the two home clashes with Albion Rovers. However, they won both matches at Cliftonhill and scored three unanswered goals in the process. The game on February 13, 2016, was the last time the two teams have shared a goalless draw.

4. Andrew Downie’s appearance on the Stranraer bench last weekend means five goalkeepers have been involved in matchday squads this season. As well as current number one Luke Scullion, Jack Baker and Curtis Lyle have both stepped between the posts. Jamie Walker, currently on loan at Bonnyton Thistle, was an unused substitute against Clyde and Kilmarnock earlier in the campaign.

5. Paul Woods has scored five times for Stranraer over his two spells with the club. Three (60%) of those strikes have come against Albion Rovers.

We are pleased to confirm that Saturday’s contest will be broadcast via our Stranraer FC LIVE streaming service, priced at £10.