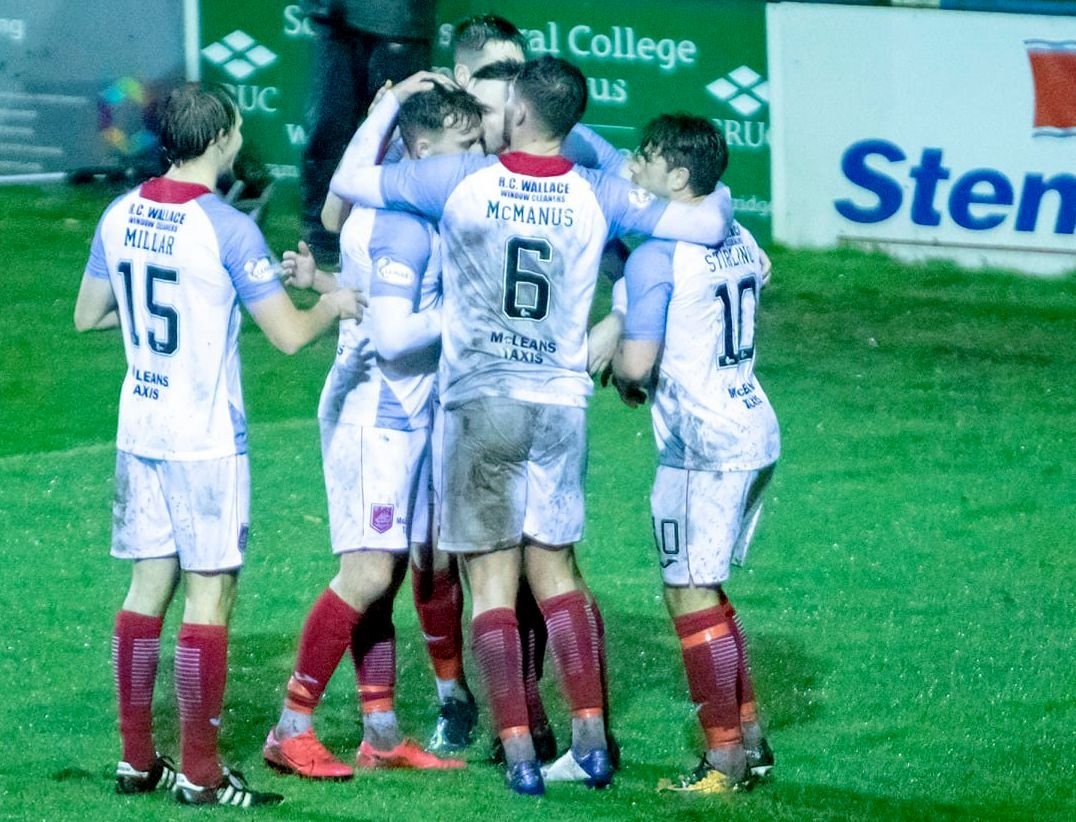 Stranraer produced a gutsy performance to triumph over Premiership opposition in a captivating Betfred Cup tie at a sodden Stair Park.

Thomas Orr’s first half strike put the Blues in front, before Hakeem Odoffin levelled the scoring with less than 20 minutes remaining.

But Darryl Duffy popped up with a late headed winner for Stranraer to set up a mouth-watering group decider against Ayr United.

Stevie Farrell was only able to name three outfield substitutes, as injuries and illness forced a makeshift back four with Grant Gallagher and Adam Cummins occupying the wide areas.

Hamilton came into the game looking to prove a point after their 8-0 drubbing at the hands of Rangers, but the South Lanarkshire club would have travelled home sorely disappointed after another miserable outing.

Cummins was first to bring a save from visiting keeper Ryan Fulton with a shot from distance on the left hand side, before Blues goalie Greg Fleming had to be alert to beat away a similar effort at the other end.

Accies started the sharper, but with chances for Odoffin and Andy Winter coming to nothing, the Blues grew in confidence and began to assert themselves on the tie.

The winger’s perfectly placed pass was swept up by in-form striker Thomas Orr, who dodged a challenge but saw his shot blocked by Accies defender Aaron Martin.

Another counter from right to left, and this time Millar found the feet of Victoria, but the Portuguese forward ran out of options after taking the ball wide.

By now the chances were coming thick and fast for the League Two outfit.

Delicate dribbling from Victoria on the mushy surface unlocked the Accies defence, but he could only fire wide from a tight angle.

Gallagher’s curling, lofted pass found Orr in space once more, with keeper Fulton coming to the rescue this time to prevent a Stranraer goal.

And as the howling wind and pouring rain whipped around Stair Park, the deadlock would finally be broken.

Gallagher’s high ball was headed clear only as far as Ruari Paton, who received a touch back from Millar and drove forward.

The energetic Irishman slipped a tidy pass through for Orr, who beat the defensive line and planted the ball through Fulton’s legs to give Stranraer a deserved lead at the break.

No doubt fired up by a few home truths in the dressing room, Hamilton emerged from the interval displaying a renewed vigour.

A dangerous ball into the Stranraer box was cleared only as far as Ross Callachan, but the Accies midfielder’s shot was bravely blocked by Cummins.

Just when it looked like Stranraer had weathered the storm, the scores were level once again.

Odoffin had signalled his attacking intent from set pieces early in the game, and he evaded the attention of returning Blues defender Ayrton Sonkur to head home the equaliser.

With the game now opening up, Paton showed quick feet to evade experienced defender Brian Easton, but saw his powerful strike turned wide by a very good stop from Fulton.

There was to be one last twist in the tale, however.

With Stranraer continuing to press their full-time opponents on a heavy pitch in the closing stages, Connor McManus forced a mistake from Ronan Hughes to release danger man Victoria.

Once more, Accies were caught on the back foot, and having entered the field for the injured Andy Stirling, James Hilton whipped in a cross for fellow substitute Duffy.

A veteran of the professional game, Duffy showed all his experience to pop up at the back post and head home the winning goal.

Having controlled the game in dreadful conditions, the Blues defence held firm to record the club’s third victory over Premiership opposition.

A tantalising tie at Somerset Park awaits for the winners, with a place in the knockout stage up for grabs.