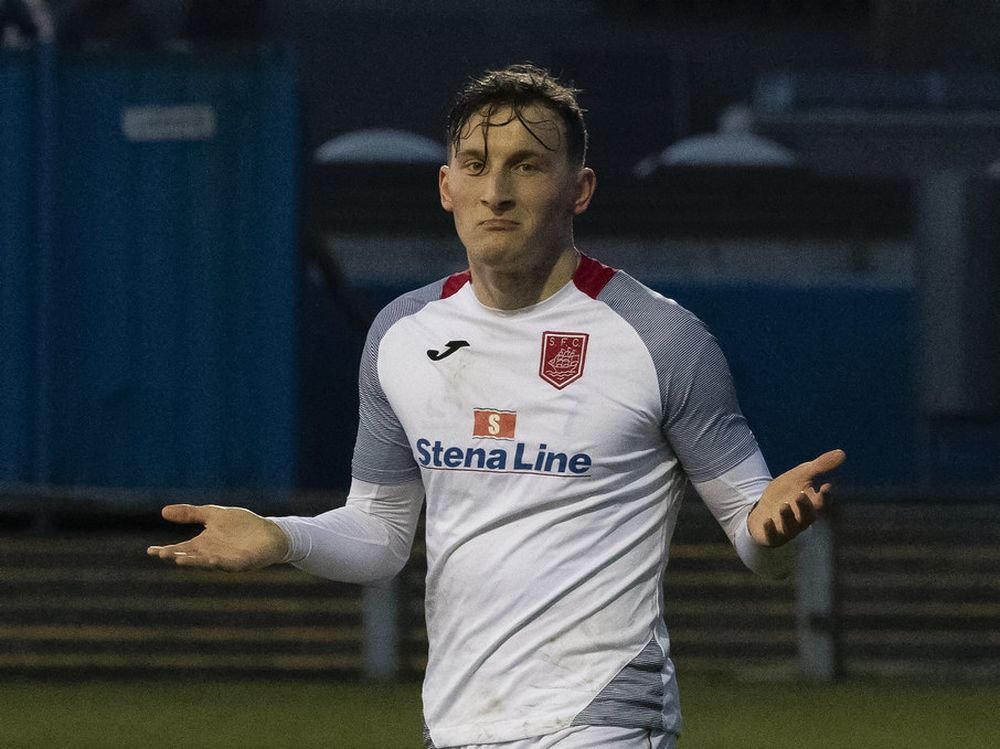 Stranraer cruised to victory at Stair Park to confirm their place in the top five ahead of the league split.

James Hilton, Thomas Orr and Ruari Paton scored within four first half minutes, with Paton adding another late on.

It was a dominant display from the Blues, who only made one change from the side which defeated fellow playoff challengers Stirling Albion just two days prior.

Orr had to settle for a cameo at Forthbank, but started in place of Darryl Duffy this time around.

Stranraer were on top throughout the 90 minutes, and on another day could have scored a few more.

Referee Peter Stuart waved away the appeals for a penalty as Paton appeared to be tripped inside the box within seven minutes of kickoff.

Ayrton Sonkur had a slightly less convincing penalty shout a few minutes later, but it wouldn’t take long for the Blues to break the deadlock.

Connor McManus found Paton, who held the ball up well and teed up James Hilton to slot home the opening goal.

It was a dream start for Stranraer, but it got even better just two minutes later.

Orr was alert to a mistake from Ryan Blair, pouncing on the loose ball and finding the bottom corner from an angle to bring his goalscoring tally to double figures for the season.

With a two goal lead, the Blues could have been forgiven for taking their foot off the throttle and protecting their advantage.

However, Paton was keen to get in on the action, and he did so in style.

The Irishman hadn’t scored since the league restart, but made up for lost time with another tidy finish into the bottom corner, having cut in from wide.

As with any Paton goal, it was accompanied by a spectacular celebration – this time a diving somersault – to entertain the Stranraer FC LIVE viewers at home.

Orr almost added another just after the half hour mark, but his shot on the turn rolled wide.

Hilton was denied by a good save from Paddy Martin in the Stenny goal after a trademark jinking run, with the Warriors keeper also shutting out Orr as the striker looked to capitalise on a long ball.

Unfortunately for the visitors it was more of the same in the second half.

Hilton, clearly enjoying his football having forced his way into the team in recent weeks, crashed a shot off the post from distance within a minute of the restart.

Botti Biabi fired over in a rare sight of goal for the Warriors, with Andy Stirling and McManus failing to find the target at the other end.

The Stenny goal was leading a charmed life by this point, thanks in part to some excellent goalkeeping from Martin.

The shotstopper made a brilliant double save to deny Paton and Orr in quick succession after good work from Stirling out wide.

Just when it looked as though the contest would descend into target practice for the Stranraer forward line, Stenhousemuir had a big chance to pull one back.

Callum Tapping floated an inviting free kick into the box, but Creag Little couldn’t force it home from close range.

The Blues responded with a long overdue fourth goal.

Paton opted to forgo the celebration after tapping home from Stirling’s low ball into the box, with Martin standing no chance of stopping it this time.

Stevie Farrell gave Matty Yates and Josh Walker a run out for the closing stages, a welcome boost for Walker having returned from injury, along with Joao Victoria and Kilmarnock loanee Ally Taylor.

The young duo both had efforts on goal in the closing stages but were unable to add to the already one-sided scoreline.

Biabi squandered an opportunity for Stenhousemuir in what was the best chance of the game for the visitors.

And Paton came close to notching up his first hat trick at Stranraer in the final few minutes, volleying over from Walker’s excellent corner kick before bringing another save from Martin down low.

Victory confirmed the Blues’ place in the top five, with only a visit to Cliftonhill remaining before the league splits in two and the bid for the promotion playoffs comes down to four post-split fixtures.

First though, the small matter of a Scottish Cup last 16 tie against Premiership heavyweights Hibernian, who visit Stair Park on Sunday for a match to be screened live on BBC One Scotland.