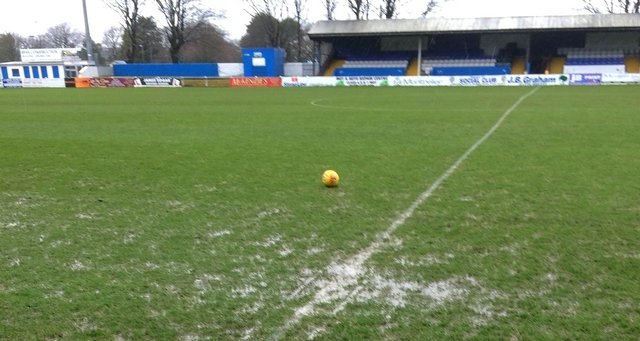 The wait for the first home win of 2022 will go on a little while longer for Stranraer.

The Blues created – and spurned – numerous glorious chances, particularly in the first half, after going behind to one of the quickest goals seen at Stair Park in many years.

Hopes were high coming into the contest after narrowly losing out to runaway league leaders Kelty Hearts seven days earlier.

However, those hopes were dashed with not even 35 seconds on the clock when Edinburgh City took the lead.

Danny Handling’s corner was whipped in to the near post and Ouzy See got the slightest touch to beat Luke Scullion.

It was not a goal that deflated the home team.

Instead, they took the game to their play-off rivals with Scott Robertson and James Hilton heavily involved.

Robertson battled for the ball in midfield and slid the ball through for Matty Yates, who could not win the race to the ball with goalkeeper Brian Schwake.

Then, Hilton, on his second home debut, was presented with a glorious chance when the ball was worked to him on the penalty spot.

He opted to take the chance first time but steered his effort well off target.

Two minutes later and a near identical chance fell to Paul Woods but unfortunately his finish was similar to Hilton’s and off target.

It was the home team doing all the attacking and Robertson was unlucky to see his effort from just inside the box blocked by the on-loan Livingston goalkeeper.

Grant Gallagher was next to try his luck after Matty Yates chested the ball into his path but again the goalkeeper was equal to it, tipping a fierce 25-yard drive to safety.

When Stranraer finally did have the beating of the Edinburgh City shotstopper, it was the woodwork that denied them a goal.

Two minutes before half time, Hilton managed to find a pocket of space and turn and get his shot away.

It flew across Schwake’s goal, only to hit the inside of the post and bounce to safety.

Stranraer’s chances of getting back into the tie were dealt a massive blow just two minutes into the second half.

Tommy Muir’s tackle on Handling in the centre circle was deemed worthy of a straight red card by referee Graham Grainger and the hosts were down to 10 men.

Craig Ross saw his instinctive effort spin beyond the post before the woodwork came to Edinburgh’s rescue for a second time.

Woods was the man with the effort, which beat Schwake but then hit the upright and bounced to safety.

All these missed opportunities would surely come back to haunt Stranraer and with 15 minutes left it was game over.

Edinburgh broke away and substitute Ciaran Brian floated a ball into the box, which Handling was able to nod comfortably home without any real challenge.

Time is running out if Stranraer want to mount a genuine play-off challenge and they will need to start picking up three points, beginning at Elgin City next weekend.