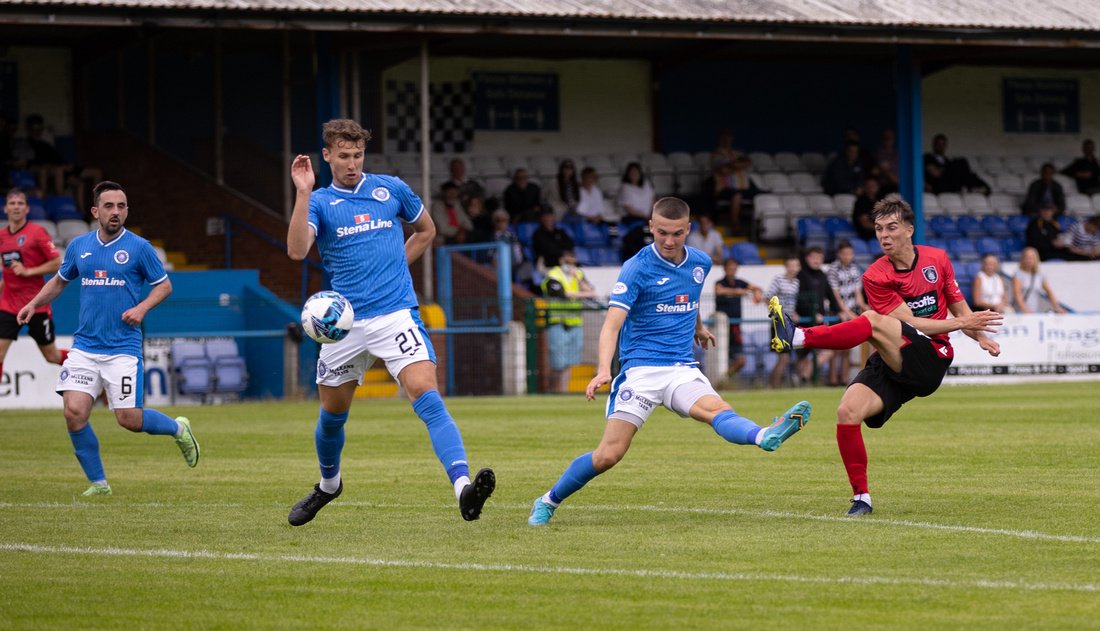 A first half hat-trick from Simon Murray gave Queen’s Park victory in an entertaining contest at Stair Park.

The former Hibs striker was the difference between the two sides as his ruthlessness in front of goal proved decisive.

Jamie Hamill’s squad was stretched to just 15 players as Craig Ross missed out through suspension and Sean McIntosh had a slight injury concern.

It meant first starts for defensive duo Scott Dunn and Kyle Girvan, as well as Scott McLean, and a first start as a permanent Stranraer signing for Sam Ellis.

The home side had started promisingly, with Scott Robertson, Girvan and James Hilton all trying to force an opening.

However, they were caught out when Murray capitalised on Dunn’s error to go clean through on goal.

The striker than kept his cool to curl the ball beyond the reach of the helpless Luke Scullion.

Murray doubled his tally just before the half hour mark when he got on the end of a corner from Dom Thomas.

At that point, many in Stair Park could have been forgiven for fearing the worst.

Stranraer heads did drop for a spell as Grant Savoury squandered a good chance after Murray set him up before Scullion denied the former Peterhead man from close range.

Savoury then held off Ellis on the edge of the box to make it 3-0 and also start a crazy final five minutes of the first half.

The home side had deserved a goal from their first half showing and they got it two minutes before the break.

Hilton swung the ball in and Robertson got to the cross first to fire beyond Calum Ferrie.

Into stoppage time and the deficit was reduced to just one when Hilton was brought down in the box.

He took the penalty himself but Ferrie guessed right and made the save.

Fortunately, McLean was following up and tucked home the rebound.

It looked very much like game on but before the home cheers could settle Queen’s Park restored their two goal advantage as Murray wrapped up his hat-trick.

Inevitably after six goals in the first half, it was not a high scoring contest after the break.

That was not through a lack of chances as Louis Longridge blasted over after Murray again set up the chance.

At the other end, McLean almost doubled his tally for the day but his shot across goal bobbled just wide of the upright.

Girvan, McLean and then Hilton were all denied in quick succession and McLean’s curling effort almost caught out a back-pedalling Ferrie.

Finally, as Stranraer pushed forward late on, the visitors ended the scoring with another stoppage time strike.

Savoury was again on hand to capitalise on some slack play from the Blues and fired home from the edge of the box.