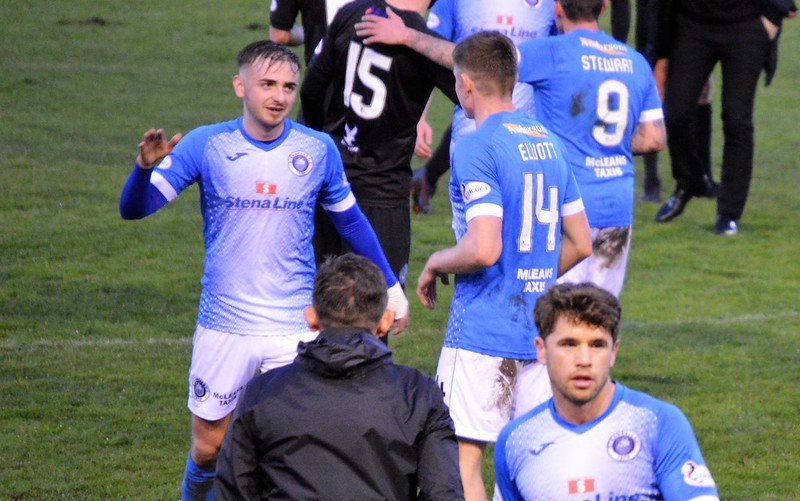 FROM movie star to match winner: all in a weekend’s work for James Hilton.

Blueprint: The Making of James Hilton premiered on Friday evening and less than 24 hours later he was stepping up to blast home a penalty kick to put Stranraer through to the fourth round of the Scottish Cup.

The short film gave a glimpse into the midfielder’s career so far and he created another memorable moment as he helped Stranraer put Dunfermline Athletic out of the cup.

He said: “I was buzzing when the ball hit the back of the net.

“It has been a good couple of days with the film coming out and I have received a few nice messages.

“It was good bringing confidence into the day and the boys were unbelievable.

“There was not one player who slacked and we were in their faces.

“They did not enjoy coming down here at all.”

Stranraer dominated much of the game, restricting their visitors from the Championship to a Kevin Nisbet free-kick, which cannoned off the crossbar.

Twenty-two-year-old Hilton was quick to step up to fire home from 12 yards.

During the short film, the midfielder revealed that he did not enjoy taking penalties, despite scoring in the shootout against Ayr United in the Betfred Cup.

He said: “I don’t know what I was thinking!

“Before the game, Frank McKeown (first team coach), he does the set pieces, said to myself and Connor McManus that one of us were to take any penalty.

“Straight away, I said I would take it.

“Then, at half time, nobody knew it was myself on penalties and Jamie Hamill shouted ‘if we get a penalty who’s taking it?’

“I just stepped up.

“I tried to get a clean connection and luckily it went in.

“I never had a clue where I was putting it, to be honest.

“I was just waiting on the goalkeeper making a move and he just stood there.”

Stranraer’s attention now turns back to the league and taking on a Falkirk side who parted company with manager Ray McKinnon earlier this month.

Lee Miller and David McCracken, who have played more than 275 games for the Bairns, have taken interim charge.

Hilton said the challenge was now to take the impressive cup result into the league campaign.

He said: “We’ve got the perfect game coming up on Saturday.

“I think Falkirk will be looking at us and thinking that we have just got a result and they will be watching what they are doing.

“If we can take this performance into next Saturday then we have given ourselves a great chance of three points and getting ourselves up the table.”