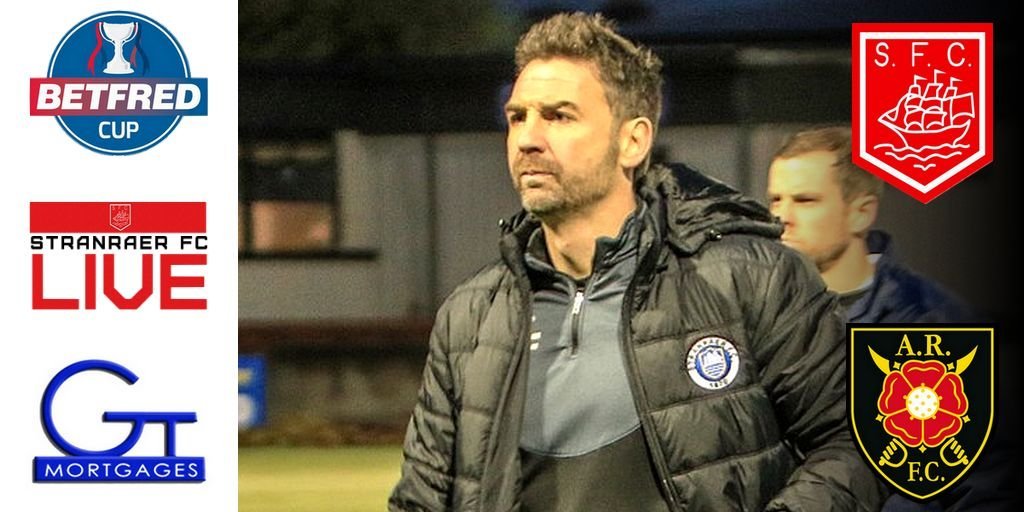 Stevie Farrell has urged his players to expect another difficult game as Stranraer welcome Albion Rovers to Stair Park on Tuesday night.

The Blues began their Betfred Cup campaign on Saturday with a penalty shoot-out victory over Annan Athletic.

Brian Reid’s Albion Rovers side were not in action as the odd team out in the group of five but last week fought well against Ayr United before going down 5-2.

Farrell said: “We got a full report on Albion Rovers.

“They were 2-2 with a Championship side for the early part of the game and caused Ayr a couple of problems.

“We are not expecting anything other than a tough game.

“I don’t buy into ‘it’s only Albion Rovers’.

“They have been in League Two for a long time and they are there on merit.

“In terms of the season ahead, Brian will be looking to cause teams problems and pick up as many points as possible.”

The manager will again have a near full squad to choose from as he looks to build on the victory at Galabank.

Lewis McIntyre will come back into the squad having missed the trip east in Dumfries and Galloway through injury.

The defender suffered a knock to his knee during the last pre-season friendly against Cumnock Juniors, but the injury is not as severe as first feared.

On the other side of the coin, Joao Victoria, who claimed an assist in teeing up Ruari Paton for Stranraer’s goal in Annan, will miss out.

Farrell said Tuesday had come too soon for the frontman but he hoped to be back involved for the league opener at the weekend.

There could be further changes made, with Grant Gallagher playing 90 minutes of competitive football for the first time since February last year.

The 29-year-old, who captained the side in the season’s opener, missed all of last season through injury.

The manager added: “We might have to be careful with Grant also.

“We are delighted with where he is but we are not wanting to get carried away.

“It would be easy just to continue playing him but we need to manage him and make sure we have got him for the business end of the season.”

Gallagher was among a number of ‘new’ faces in the Stranraer line-up taking to the pitch in Annan on Saturday.

Goalkeeper Greg Fleming, defenders Sean Burns, Ayrton Sonkur and Tom Devitt, as well as Kieran Millar, Darryl Duffy and Paton all made their debuts, with Thomas Orr also coming off the bench.

Farrell was pleased with his side’s showing and felt they could have taken all three points instead of having to settle for the draw and bonus point with victory in the penalty shoot-out.

He said: “I thought we should have been 3-0 up at half time when you consider the chances that we had in the first half.

“I was disappointed we were not further in front in the first half.

“When you lose a goal, you need to see a reaction and we saw a reaction.

“But for the width of the post we would probably have got the three points with Cameron Elliott.”

A second half collapse saw Stranraer surrender all three points when Albion Rovers came to Stair Park in March 2018.

Kyle Turner scored a quickfire double in the first half before Gary Fisher pulled one back after the restart. Entering into the final ten minutes, the hosts still had the upper hand. However, Kane Hester and then Craig McLeish scored to ensure the points went to Coatbridge.

Again, a face unfamiliar to Stranraer fans will take charge of one of the Blues’ matches.

Calum Scott will visit Stair Park for the first time on Tuesday night, although he has taken charge of an Albion Rovers contest.

More than a year ago, Mr Scott was in the middle of Queen’s Park versus Albion Rovers. On that occasion, the spoils were shared with Euan East scoring for the visitors to Hampden Park before a last minute equaliser from Salim Kouider-Aisser.

You can order the match now with our one-game pass, priced at £7.99.

Commentary is provided by avid Blues fans Shaun Niven, Brian Martin and David Kelly, and coverage is expected to start from around 7.15pm.